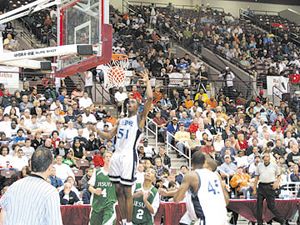 ALDINE Campbell Center was the site of this years Annual Academy National Invitational basketball tournament, from December 27th through 30th.
Thousands of fans and spectators attended this thrilling show of the countrys best teams. There are two divisions, National and Texas, and 8 teams competed in each.

The national division was won by DeMatha High School of Hyattsville, Md. and the Texas division was won by Aldine High School. Also competing locally were Bellaire, Klein Collins, Madison, Strake Jesuit, Woodlands, Westbury, and Yates. Other local teams that competed in the national division included Kingwood and Alief Hastings.
On the way to winning the Texas Division, Aldine defeated Woodlands 79-53, Strake Jesuit 67-62, and Klein Collins 65-49.In the three games, Gary Johnson scored a total of 75 points, and Brandon Williams 41 points.
In the national division, DeMatha defeated Ranier Beach (WA) 73-44, Kingwood 58-48, and St. Patrick (NJ) 57-49. Leading scorer for DeMatha was Austin Freeman with 52 points for the three games.
Aldine is the number 2 ranked high school team in the area. They now have a 16-1 record as of last week. In this tournament, they developed their defensive game, which at times has been lacking. With the lead of Gary Johnson, the Mustangs are hoping for the state championship.
DeMatha defeated Kingwood, the No. 10 ranked team in the nation, to reach the finals. DeMatha is currently ranked no. 18 in the country, but previously had been as high as no. 3. By defeating No. 2 ranked St. Patrick, they very well may regain their previous ranking.