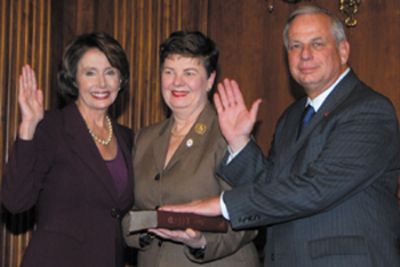 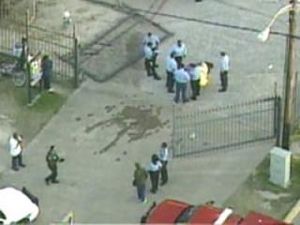 Houston police are investigating the death of a child at 7170 Parker Road on Wednesday, January 10, 2007 at 4:55 p.m.
The victim is identified as Ronkeith Andrews, 5, of 7170 Parker Road #104.
HPD Homicide Division Officers S. Straughter and E. Schmidt reported:
Ronkeith was walking near the north gate of the apartment complex with his sister when a gate fell on him.He was pronounced dead at the scene and his sister was unharmed.
At this point in the investigation the incident appears to be an accident. 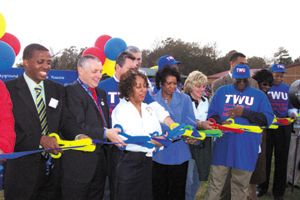 America (TWU) honored the memory of Dr. Martin Luther King this past holiday weekend by donating playground equipment to North Forests Thurgood Marshall Elementary school. TWU and other unions raised $52,575 for the new playground system in addition to in-kind contributions for area schools.
Working people and especially union members feel a special bond to Dr. King, said TWU national president James C. Little. Few people remember that Dr. King had just returned from a union picket line before he was gunned-down in Memphis. He was our ally and we are still his ally.
Dr. King dreamed of a society that offered equal opportunity for success, Little said. We hope by donating this equipment and supplies, we are creating an opportunity for a better life for local schoolchildren.
In addition to the playground system, the United Steel Workers donated paper supplies to Thurgood, M.C. Williams Middle, and Kashmere Senior High schools.

Twenty-three star entertainers are scheduled to perform at the 2007 Houston Livestock Show and Rodeo. Tickets go on sale Saturday, Jan. 13, 2007, at all Ticketmaster locations (excluding the Reliant Park Box office until Monday, Jan. 15) and www.rodeohouston.com.

TICKET INFORMATION
Rodeo ticket prices range from $16 to $300, plus a Ticketmaster convenience charge. Tickets can be purchased through all Ticketmaster locations, on the Internet at www.rodeohouston.com, or by phone at 1.800.726.1313. Ticketmaster locations include Macys, Fiesta, and select f.y.e., Wherehouse Music, and HEB stores. On the opening day of ticket sales, Saturday, Jan. 13, there is a 10-ticket limit for the rodeo performances featuring George Strait on Feb. 27, Rascal Flatts on March 14, and Beyoncé on March 15. Beginning Monday, Jan. 15, tickets will be available at the Reliant Park Box Office, with no service charge.
Most Ticketmaster locations in the Houston area will be distributing linestubs beginning at 9 a.m., Saturday, Jan. 13. VISA, MasterCard, Discover and American Express cards will be accepted online or by phone at 1.800.726.1313.
Season Tickets
Season tickets are now on sale. Season tickets provide the same great tickets for all 20 RODEOHOUSTON performances. A pair of season tickets start as low as $640. The cost also includes admission to Reliant Center, Reliant Arena, The Hideout (21 and older) and the carnival.
Mini-Season Ticket Packages
For the first time, RODEOHOUSTON fans can purchase one of two nineperformance Mini-Season Ticket packages, with seats located in the loge level of Reliant Stadium. A pair of Mini-Season Tickets can be purchased for less than $350, guaranteeing the same great seats for nine action-packed, star-studded performances.
Two packages are available for Mini-Season Tickets:
 Opening Night Package  This package includes the Feb. 27, and March 1, 4, 6, 7, 10, 12, 15, and 17 performances.
 Finalé Package  This package includes the Feb. 28, and March 3, 5, 8, 9, 13, 14, 16, and 18 performances.
Black Heritage Day, Friday, March 2, and Go Tejano Day, Sunday, March 11, can be purchased in addition to the Mini-Season Tickets, if available.
Season Tickets, for all 20 Houston Livestock Show and Rodeo performances, and Mini-Season Ticket packages are on sale now. Call the Shows Ticket Office at 832.667.1080 to guarantee your seats for 2007 RODEOHOUSTON.
AGRICULTURE  EDUCATION  ENTERTAINMENT  WESTERN HERITAGE
The 2007 Houston Livestock Show and Rodeo runs Feb. 27 through March 18. The Show is a Section 501(c)(3) charitable event, committed to benefiting youth, supporting education, and facilitating better agricultural practices through exhibitions and presentation. Since the Shows beginning in 1932, the Houston Livestock Show and Rodeo has contributed more than $200 million to scholarships, research, endowments, calf scramble participants, junior show exhibitors, the Rodeo Institute for Teacher Excellence, School Art participants, and other educational and youth programs. For more information about the Houston Livestock Show and Rodeo, visit www.rodeohouston.com.