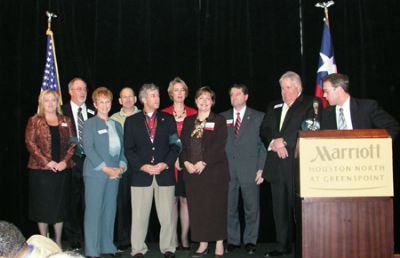 GREENSPOINT Over a hundred persons attended the beginning of a new year, with new directors and officers being installed for the North Houston Greenspoint Chamber of Commerce.
The ceremony was a luncheon at the Greenspoint Marriott Hotel, held last Thursday, Jan. 11.

The meeting was presided over by the new president, Reggie Gray, and included presentations by outgoing Chairman Jerry Lowry, and incoming Chairman Bill Ginder.
Enthusiasm and new beginnings were the key to the luncheon, as demonstrated by the large turnout, a number of awards and new investment programs announced by Gray.
The investing program, open to any chamber member, calls for capital investment in the chamber in a program called Funding Our Future. Large contributions are placed in bank earnings accounts, with the money to be used for future chamber growth. The first participants in this program included Comerica Bank, with a $5000 donation, Reliant Energy $5000, AT&T $5000, and Houston Chronicle $25,000.
The program started with remarks by President Reggie Gray and Chairman Jerry Lowry. A magnificent rendition of the National Anthem was sung by Darrell Luckett of Gallery Furniture.
Presentation of Awards was made by president Gray. They were as follows:
Company of the Year, Boullion Graphics, represented by Jill and Pat Boullion for their support of the chamber and their contribution to the businesss community;
Citizen of the Year, Dr. David Sam, president of North Houston College for his volunteer work for the betterment of the community;
Chamber Volunteers of the Year, Linda Kohler and Rodney Anderson for their leadership of chamber activities;
Humanitarian Award, Bill Townsend and John Zizelmann for their contribution of time and services to civic or charitable organizations;
Pinnacle Award, to Jerry Lowry, Pat Boullion, and Marilyn Sanders for their sustained high level of support of the chamber;
Shining Star Award, to the Aldine Greenspoint YMCA, Mission Greenspoint, and Macedonia Outreach for their efforts to serve the people of our communities.
Sponsors of the luncheon included the Aldine Improvement District, Anadarko, At&T, Caldwell Watson Real Estate, Comerica Bank, Hines, Houston Chronicle, North Harris College, Partners Bank of Texas, and Reliant Energy.
The new board of directors was sworn in by John Pickelman, Chencellor of the North Harris Montgomery Coummity College District.
President Gray also recognized retiring directors Clark Austin, Ray Shotwell, and Ben Wilson with a special award.
Gray also congratulated Rosemary Buske of Contact Promotions for receiving the Small Business Award of the Year.
Retiring Chairman of the Board, Jerry Lowry, of the Greater Greenspoint District, presented an overview of the accomplishments and highlights of his year. He mentioned that one of these was overseeing the search for a new president, and the subsequent selection of Reggie Gray. Other changes included a new office location, and a New Vision, New Look and New Vitality. His motto for the year was to stay Connected for Growth by working the chamber so it will work for you, he said.
The incoming chairman, Bill Ginder of Caldwell Watson Real Estate, gave a keynote talk about what to expect for the next year in the chamber.
In a humorous metaphor, he likened himself to an alligator, not an ostrich or monkey as others might be, because he has a goal and plan, he will see the chamber moving forward, and like an alligator he is prepared to bite something to make it happen.
Ginder has set up 4 teams for the year:
1. Economic Development, with Linda Kohler as chair. They have planned one event so far, and will hold another later in the year.
2. Membership Development, under Bill Townsend. The goal is to double the members, from 325 to 650 in the year, and to increase retention.
3. Marketing Team, led by Rosemary Buske, to hold fundraising events.
4. Workforce Education/Service Team, led by Ralph Wheeler of the YMCA.
Ginder stated that each team will have smart goals, that are measurable and timely. He noted that the chamber works in 4 distinctly different areas of the community: Greenspoint, Airport, US59 Eastex, and Below Beltway 8 in North Houston. He saw this as an opportunity to grow and serve, if addressed properly.

In the traditional passing of the gavel 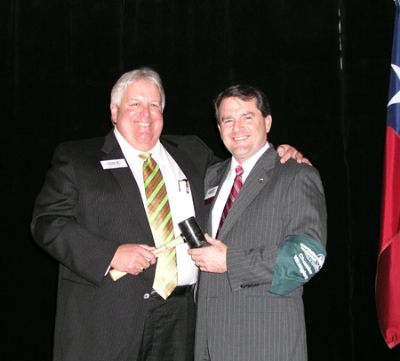 Gallegos health problem to keep him from Senate floor 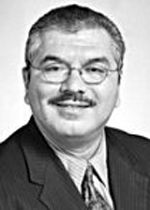 State Senator Mario V. Gallegos announced this week that his doctor place him on a waiting list of a liver transplant. Pending the transplant, Gallegos is unable to travel far from Houston and so will be unable to be in the Texas Capitol this session.

My physician has placed me on a waiting list to be a recipient for a liver transplant. He has long anticipated this possibility ever since I became sober almost a year ago. He and I have worked hard together to ensure that I would be in the best possible health, either to prevent the necessity for such a procedure, or to make sure that I would be a strong recipient for the organ in the event the procedure became necessary.
My physician estimates that from the time I receive the transplant, I will need an additional 18 days of recovery time prior to resuming my duties in person in Austin. Obviously, I do not yet know when a compatible liver will become available, or how many other patients of similar liver compatibility are of higher priority than my medical need, so it is unknown at this point when the surgery might occur.
Of paramount importance to me is that the interests of those in my Senate district are well-represented in my absence, and I have taken steps to make sure of it.
First, I will be in constant communication with my legislative staff, and they will coordinate with other Senate offices to make sure any amendments I would have otherwise proposed in Senate committees to legislation affecting my constituents will instead be offered by other Senators on the appropriate committees. Once Lt. Governor Dewhurst makes his decisions regarding committee assignments, I will complete that process.
Second, in the spirit of the Luna Precedent set by then-Senator Gregory Luna and honored by then-Lt. Governor Rick Perry, I have submitted a letter to Governor Dewhurst formally requesting that key legislation be delayed for suspension of the rules and Senate floor debate until my return. Unless my surgery occurs later in the session instead of earlier, the speed with which major legislation emerges from committee makes me hopeful that I will not have to make such a request on a specific piece of legislation. Governor Dewhurst and I have discussed the situation at length, and I deeply appreciate his support in the matter. 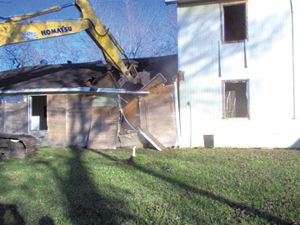 Rocky Balboa is the best of the six Rocky movies 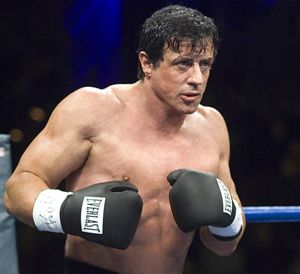 Rocky Balboa is the sixth film in the plucky pugilists 30-year cinematic career  and one of the best of the batch.
Not since the original Rocky has Sylvester Stallone portrayed Balboa with such vulnerability and humanity. This film is so well-written and acted that I wouldve rather seen more scenes with the characters in their daily life than the final 30-minute boxing match.

The film takes place back in Philly. Pushing 60, Rockys career is long over. His wife, Adrian, has been dead for a few years, and Rocky Jr. is off to make his way in the corporate world. Junior (Milo Ventimiglia of Heroes) is having a tough time living in dads shadow, so he and Pop dont speak much.
This leaves Rocky alone, brokenhearted and living a life without meaning. When he isnt spending time at Adrians grave, hes running a modest little restaurant (named Adrians) where he regales the patrons with tales of past battles.
Thankfully, Rocky stumbles upon a woman from his past, Little Marie (Geraldine Hughes), a woman he hasnt spoken to since he walked her home 30 years ago when she was a wayward teen. The affection between these two characters is mature and unspoken, and it trumps anything we ever saw from Talia Shire.
Just as things start looking up, enter Mason The Line Dixon (Antonio Tarver), the current champ whose fights are all setups. Dixon is looking for respect, and the only way to get it is by fighting the ex-champ. Rocky needs to purge himself of some demons in the basement, i.e., get over Adrians death so he can move on with life, and teach his son the meaning of courage.
Cue the montage music.
I know I spoke heresy in the second paragraph, but Rocky Balboa wouldve been a better film without the boxing match. The performances and the relationships between the characters are so strong, this movie could stand on its own without the fight scene.
Even still, Rocky Balboa is a fine movie, almost as good as the original.

The eagle screamed so back to writing Two Cent Worth if you savvy.
We always used that term aboard ship in the Coast Guard come pay day. All the mates lined up with the highest ranking first in line. Everybody was paid in cash as others waited in line to collect on their gambling debts. Not me because I was always too tight to play cards or shoot dice with the mates.

Had this one First Class Boson Mate that always wanted to borrow a few bucks but he was very hard to collect from plus he didnt want to pay anything to boot. Only he taught me a lesson the first go round because after that I wouldnt loan him a nickel.
Whats that old saying, shame on you first time but shame on me second time?
There were some guys that would pay out their entire pay check after a 30 day pay period to pay their gambling debt.
Some of the nicer guys would let them keep ten bucks or so to buy deodorant, soap and toothpaste. Smokes were a buck a carton back then and free of all taxes.
Many miles have been traveled since that time, be it nautical, air or flying low in a vehicle. Having past the golden age plus another ten years the old gold (not a cigarette) has started to rust. WD-40 is not doing the job.
Being a believer in preventive maintenance, and after putting it off for ten years, this ole mate finally had his colon checked.
Although there is a permanent frown on my face from building up to it, the procedure was not all that bad compared a few bottles of barium consumed prior to being x-rayed a few years back.
Had to drink a full gallon of this nasty stuff that is suppose to clean you out. I guarantee it!
This being done in a hospital with you being knocked out makes all the difference in the world and again the worse part is the quantity of the cocktail to give you a case of the turkey trots.
Then they take you to the recovery area which should be renamed to the gas chamber area as the air is expelled from the photographed procedure.
Didnt win a checkered flag or anything but sure was glad to get home and eat a bite or two. Jell-O and broth dont do much for a shy fat boy.
My phobia is gone now since the procedure is done. My second dad, father-in-law passed by what started out as colon cancer. He was in his 70s and a fit man indeed.
He told me after all said and done, Charlie, if I had it to do all over again, Id let it kill me.
Come on Old Man Winter, get on down the road, I got a garden to till and onions ready to go in the ground.
Behave!