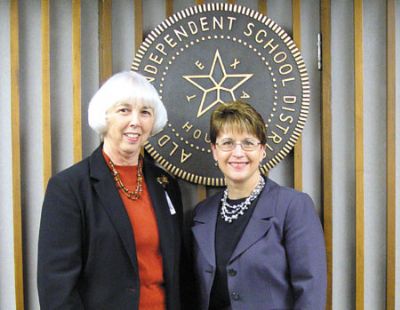 During the Jan. 23 Board of Education meeting, Aldine ISD Trustees unanimously voted to name Dr. Wanda Bamberg as Aldines next superintendent to succeed Superintendent Nadine Kujawa, who will retire on May 31, 2007.

Dr. Bamberg received her bachelors degree in English from the University of Alabama in 1977, and her masters degree in secondary education from the same university in 1979. She received her doctorate in educational leadership from Sam Houston State University in 2004. Dr. Bamberg is certified as a superintendent.
She began her teaching career in the Tuscaloosa County School District in 1977 where she was assigned to teach English at Boteler Junior High School. In 1981, she transferred to Hillcrest High School where she continued to teach English. In 1982, Dr. Bamberg moved to the Houston area and joined Aldine ISD. She was assigned to teach English and reading at Hoffman Middle School. In 1987, she was named the program director of middle school language arts and in January, 1997, she was promoted to the position of Director of Curriculum and Instruction. In 1998, she was named Executive Director of Curriculum and Instruction and in July 2001, she moved into her present position as Assistant Superintendent of Curriculum and Instruction.
Dr. Bamberg has 29 years of experience in the field of education and she has spent 25 of those years in Aldine ISD. Dr. Bamberg and her husband David have a son, who is a sophomore in high school.

END_OF_DOCUMENT_TOKEN_TO_BE_REPLACED

Houston is good for business 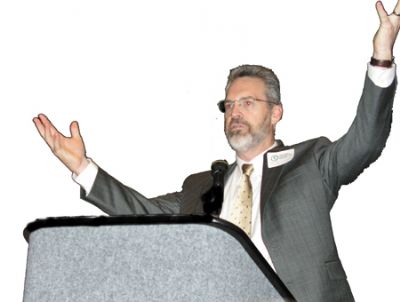 By Gilbert Hoffman
Northeast News Publisher
The North Houston Greenspoint Chamber of Commerce held the 2007 Economic Leadership Forum on January 18th, and an audience of several hundred business persons heard about their future, in a forum entitled: North Houston Today & Tomorrow–Connected for Growth.
A high powered panel of economic and business leaders discussed the economy of North Houston and the city in general, and came to the conclusion: Houston is one of the best places in the nation to conduct and grow a successful business.

The keynote speaker was Dr. Mark Dotzour, chief economist and director of research for the Real Estate Center at Texas A & M. Moderator of the panel was KUHF station manager Debra Fraser, and the symposium panelists included Fred Caldwell of Caldwell Watson Real Estate, Ray Charles of ExxonMobil Exploration, Ray Laughter Vice Chancellor of North Harris Montgomery Community College, Jim McIngvale of Gallery Furniture, Jeff Moseley of the Greater Houston Partnership, and Rick Vacar of the Houston Department of Aviation.
The Forum was under the leadership of committee chair Lynda Kohler of Frost Bank, and the new Chamber Chairman Bill Ginder and President Reggie Gray.
Dr. Dotzour in his keynote address covered the outlook for the regions economy, job growth in 2007, investments in the U.S., and how Texas and Houston will perform.
He said that Texas is one of the best states to be in business, and that corporate profits here have doubled since 2002.
Dotzour noted that small business is optimistic about the future, that nationally they are hiring 10 to 20 percent new employees, and Texas will be double this rate.
Dotzour said there is much speculation about whether there will be a national recession in 2007, as some economic indicators show. However, he said that there is only a 40% chance of this, and even if it happens he expects that Texas will not participate. Noting that Houston is the home of a strong energy market, we have factors that protect us from risk.
He pointed out a number of job categories where job growth is prevalent, such as education and health. Only manufacturing seems to be down, but Houston even reverses that trend locally, he claimed.
He said that for an investor, real estate is currently a better choice than stocks, and bonds are not even to be considered.
Noting population growth, Texas is near the top of the list, with an additional 2 million people in the last five years and a total population of 22 million.
Texas also has some of the lowest state and local taxes in the nation, a further boost to economic growth.
After the keynote, the other five panelists made presentations in their area of expertise.
Jeff Moseley spoke on a regional perspective of the economy. He noted new initiatives such as Opportunity Houston. This is an effort, headed by Drayton MacLane, to raise $40 million and recruit a total of 600,000 new jobs for the area. He also noted that the expansion of the Panama Canal will bring new shipping opportunities to Gulf Coast locations, such as the new Wal-Mart distribution center in Chambers County.
Ray Charles, of ExxonMobil Exploration, mentioned that quality of life depended upon access to energy in todays world. ExxonMobil believes there is plenty of resources or reserves to sustain industry for future decades. This includes liquid fuels, coal, gas, nuclear, wind, thermal and other sources.
Rick Vacar, of the Houston Airport System, said that Houston airport traffic, now at almost 50 million passengers yearly, grows at 8% every year. Although Intercontinental airport just completed $3 billion dollars in improvements, another round of expansion will be necessary by 2012, when two new runways will be completed. Vacar sees larger planes as a future trend, as well as consolidation of air carriers into few companies.
Fred Caldwell, of Caldwell Watson Real Estate, spoke of the strong market for commercial and residential properties in the area, and expected it to continue. Occupancy of Class A office space in North Houston is now at 91%, meaning that we will see more construction. He challenged the leadership to find better solutions for future problems: mobility and mass transit, an ugly tollway, and master planned/mixed use developments.
Ray Laughter, vice chancellor of NHMCC district, talked about the phenomenol growth of the community college system, with 46,000 students on 5 campuses, serving 11 school districts. Business will need trained workers in the years ahead, but they are often not available. He sees community colleges as the solution to Workforce Training, but said that they need business and education partners to succeed. His challege: to be a Partner.
Jim McIngvale, of Gallery Furniture, said the Houston economy is strong because of a lower cost of living than other parts of the nation, and is driven by an Entreprenual Spirit and the influx of immigrants to this area. He said that our future must be inclusive of all these cultures, and we must strive for a world class healthcare system, world class educational system, and promote the Joy of Work as it has been in the past. To help achieve some of these goals, McIngvale said that he will personally provide a new health clinic in front of his store, affiliated with Baylor and CHIPS, the states childrens insurance plan, for people that currently do not have access to good health care.
For those who want to hear more from McIngvale, or Mattress Mack as he sometimes calls himself, he will be the featured speaker at the NHGCC Chambers luncheon on February 15th.

END_OF_DOCUMENT_TOKEN_TO_BE_REPLACED 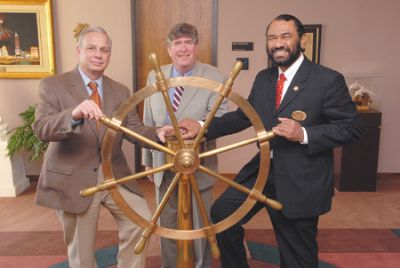 Both congressmen received briefings from PHA officials, a representative of the U.S. Coast Guard and the Portwide Strategic Security Council – on PHAs port security strategies and the cooperation and integrated communications among federal, local and private partners. Additionally, the congressional members toured the PHAs Port Coordination Center and Mobile Command Center.
I was impressed with the technology and sophistication of the security system at the Port Authority, Al Green said. But I was just as impressed with the personnel running the systems.
Each time I come to the Port of Houston, I see improvement in the security system and each time technology improves, security improves at the port, Gene Green said.
Both lawmakers pledged that – as funds are needed – they will work tirelessly to ensure the Port of Houston stays on the leading edge of security technology.
The Port of Houston Authority owns and operates the public facilities located along the Port of Houston, the 25-mile long complex of diversified public and private facilities designed for handling general cargo, containers, grain and other dry bulk materials, project and heavy lift cargo, and other types of cargo. Each year, more than 7,000 vessels call at the port, which ranks first in the U.S. in foreign waterborne tonnage, second in overall total tonnage, and 10th largest in the world. The Port Authority plays a vital role in ensuring navigational safety along the Houston Ship Channel, which has been instrumental in Houstons development as a center of international trade. The Barbours Cut Container Terminal and Central Maintenance Facility are the first of any U.S. port facilities to develop and implement an innovative Environmental Management System that meets the rigorous standards of ISO 14001. Additionally, the port is an approved delivery point for Coffee C futures contracts traded on the New York Board of Trades Coffee, Sugar & Cocoa Exchange.
For more information, please visit www.portofhouston.com