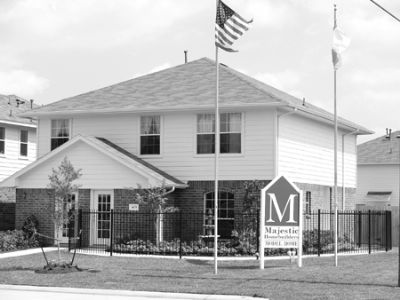 ACORN Housing Corp. has scheduled a Free Homebuyer Fair at the Shadydale Elementary School, 5905 East Tidwell Road in Northeast Houston. The Fair is scheduled from 10 AM until 2 PM, on Saturday, February 10. Reserve spaces can be made by calling either (713) 635-7264 or (713) 349-0760.
 There are literally thousands of families and individuals in Houston who are not aware of or have an idea of where to look for sources, ways, means of buying a home, according to information and discussed in a recent meeting with Juan V. Perales, Housing Development Project Manager with Houstons ACORN Housing Corp. According to Perales, these are often individuals who.by way of varied circumstances, fall through the socio-economic cracks of society, going through life with one lifestyle, that is Apartment Dwelling. Recognizing that an apartment lifestyle does not mean it is an inferior one, but families who have less than a single family home for a lifetime, that element of pride and dignity that generally comes with homeownership can make a significant difference in a childs choices and ambitions due to environmental factors alone.

ACORN Housing Corp., a major faction of Houstons affordable Housing field is sponsoring its NORTHEAST HOMEBUYER FAIR to give low to moderate income working families the opportunity to become home owners. The fair which is designed to help potential homeowners get into the loop of resources they need. They will have the opportunities to meet with representatives from the City of Houston as well as banking partners of ACORN. Among these will be WORLD SAVINGS, JP MORGAN CHASE, CITI BANK and BANK OF AMERICA.
Representatives from the City of Houstons Homebuyer Assistance Program (HAP) will conduct workshops to explain how to qualify for the Citys Down payment assistance Program. The level of assistance ranges from $10,000.00 to $30,000.00 to eligible families who qualify. This level of assistance is free money in a form of a Grant. Individuals can find out how to qualify at this workshop.
ACORN Housing Corp. housing representatives will be in attendance to help potential buyers with their options. ACORN Housing will hold workshops to explain how our homeownership counselors will help families qualify for a loan and repair ones credit to maintain a loan. ACORN Counselors will conduct initial evaluations to help determine what one can afford. Workshops will explain how you can qualify for up to $30,000.00 in free down payment assistance.
Families can also find out how to qualify for a new home in the ACORN GLENN Subdivision. This affordable subdivision has homes available right nowjust call (713) 635-7264 and start the process of becoming a homeowner within this subdivision. It offers quality full size homes of full 5,000 square feet lots. These homes will be on display at the fair.
If you are thinking of buying a home but need someone to help you figure out what your options are.ACORN Housing Corp. can help. The word from ACORN Housing Corp. is  Acorn Housing can help . Staffers are advising  Now is the time to get started; do not let another years of Income Tax refund go to waste, use it to invest in your future by becoming a homebuyer.
Come to ACORN Housing Corp.s Free Homebuyer Fair at the Shadydale Elementary School, 5905 East Tidwell Roan in Northeast Houston. The Fair is scheduled from 10 AM until 2 PM, on Saturday, February 10. Reserve spaces can be made by calling either (713) 635-7264 or (713) 349-0760.
ACORN Housing Corp. has been providing homeownership opportunities and free Housing counseling to low and moderate income homebuyers since 1987. We have opened HUD certified, Fannie Mae approved housing counseling offices across the United States, helping families to achieve homeownership and leveraging $10 Billion in mortgage loans, and grants and other assistance that help make affordable homeownership available to lower income familes. 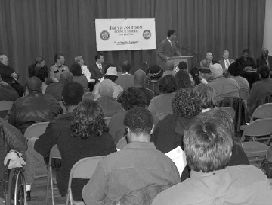 More money and services are coming to Northeast Houston thanks to its Super Neighborhoods and residents speaking up. On January 31, City of Houston Councilmember Jarvis Johnson, hosted a public meeting with a regime of more than a dozen City of Houston department heads and officials at Shadydale Elementary in NFISD.
Councilman Johnson led the public meeting stating that it was the communitys turn to let the city know whats going on in their community and what needed. The main focus of the meeting was to obtain input before preparation of the Citys FY2006 Annual Operating Budget and the FY2006-2010 Capital Improvement Plan (CIP). The meeting provided an opportunity for citizens to participate in the budget process through contributing concerns, comments, requests and suggestions about needed services and improvements for their area.

Residents lined up to tell about problems needing attention in their communities. One resident mentioned that she has to wade in water to get to her mail box every time it rains. Another resident stated that recently a gas pipe broke under the only street that leads in and out of her Woodglen subdivision and if anything blocks the street during an emergency, the ambulance would not be able to get in and they would not be able get out, so her request was for building an additional street out.
The Presidents of all area Super Neighborhoods representing the 80,000 Northeast residents came forward and provided requests directly to Councilman Johnson and the city officials. Jackie Mayhorn, President of Super Neighborhood 47, provided a laundry list of many requests collected during the year from residents of the community.
Councilman Johnson has helped move the community forward with the Multipurpose Center, a new Tidwell park and with more than 2,500 new homes being built along Little York road, the community is going to need an Overpass to move traffic over the train tracks of Little York and Hirsh road, said Mayhorn. She added that they wanted a quiet zone to stop trains from blowing horns at 3:00 in the morning every night.
Residents took full advantage of the opportunity to meet with the city planners to solve nearby flooding, street lighting, youth centers, upgrade parks along with repairing and widening streets. Councilman Jarvis Johnson and his team of city department heads recorded all concerns of the community stated that the information would be used in budgeting capital improvements for the area.
There is only so much funding available, but loud voices and participation by the citizens of the community is what directs money to build Multipurpose Centers, library renovations, safer better parks, wider streets, reduced flooding and so much more, said Johnson and the community has done that today. 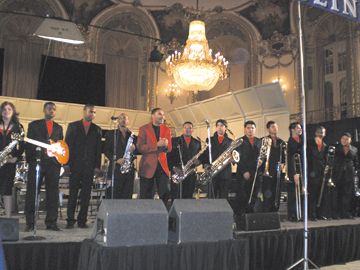 Over the last 15 years, the MacArthur Jazz Ensemble has had the privilege to perform four times at the prestigious Midwest International Band and Orchestra Clinic in Chicago and after its most recent performance in December, even director Jose Diaz came away impressed.
I know I am biased, but I have to say the Jazz Ensembles performance was the highlight of the conference, said Diaz, who has directed the group at its three prior trips to the Windy City. Ive had the pleasure of presenting at the Midwest Clinic three previous times and I can honestly say this years performance was the best ever. This is the most talented jazz ensemble Ive had the pleasure of directing in all of my years at MacArthur Senior High.

The Jazz Ensemble performed in front of 2,500 music educators from around the world and had to first pass a rigorous audition (musical groups are allowed to audition every four years to land a spot at the clinic) in order to earn an invitation to the clinic. According to Diaz, by earning a spot at the 2006 conference, held at the Chicago Hilton, the MacArthur Jazz Ensemble became the only high school group to ever be invited to perform four times in the last 15 years.
During their performance on Dec. 21, the Jazz Ensemble had the distinct pleasure to work with Grammy nominated artists Patrice Rushen and Jon Faddis.
The Ensemble consists of: David Adame, Jordan Donald, Wesley Livingston, Joshua Membreno and Lauren Reyes (saxophones); Tony Holman, Luis Olguin, Stephen Ramirez and John St. Julian (trumpets), Ryan Cano, Edmundo Castillo, Luis Gonzalez and Willie Russell (trombones), Calvin Brantley, David Cutright, Catrell Gray, Jabari Johnson, Nicholas Johnson, Yvette Mata, Jermaine Smith and Ana Toledo (rhythm section) and Julio Palacios (vocals).
Due to their impressive showing in Chicago, the Jazz Ensemble received an invitation to perform at the prestigious Western International band Clinic in Seattle, set for Nov. 15-19.
The exposure the MacArthur students received was significant, not only for them, but for our entire district, said Dr. Jeff Laird, director of secondary performing arts education. Their strong performance has definitely kept Aldine ISDs name in the forefront nationally. In addition, this performance was the highlight of these young students musical lives to this point. This was a very big deal for the ensemble and our district. 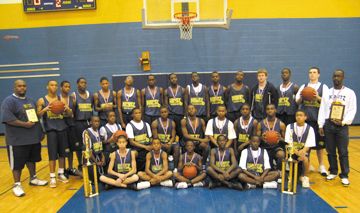