Here it is the third weekend in February and the Garden of Weedin is about full; got just enough room left for some hot pepper plants.
Went heavy with the onions this year (sets and transplants) as last years crop was right tasty and went quick.
Dont normally plant potatoes due to limited space but the gardening guru on Maple Street gave some to me and says to put some ash in the ground when you plant them. Hope it works because it was a messy job.
Might be a bit early with the tomato planting this year but thats ok as long as it does not freeze.
There should be an early spring this year, coupled with El Nino, global warming and the ground hog not seeing its shadow. 1999 was the last time the groundhog did not see its shadow. Spring is around the corner and will be here next month.

Did you know a groundhog is another name for a woodchuck or a whistlepig. It is a rodent and a member of the squirrel family; imagine a 30 pound squirrel.
So you ask how much wood would a woodchuck chuck if a woodchuck could chuck wood?
Its funny how those old tongue twisters pop up in your mind. They all seem to get passed from generation to generation.
Here are a few that you may have heard before:
How can a clam cram in a clean cream can?
Can you can a can as a canner can can a can?
Picky people pick Peter Pan Peanut-Butter, tis the peanut-butter picky people pick.
Petes pa Pete poked to the pea patch to pick a peck of peas for the poor pink pig in the pink hole pig-pen.
Which rich wicked witch wished the wicked wish?
She sells sea shell by the sea shore.
The shells she sells are surely seashells.
So if she sells shells on the seashore,
Im sure she sells seashore shells.
If you weed them weal fast your tongue will get tick. 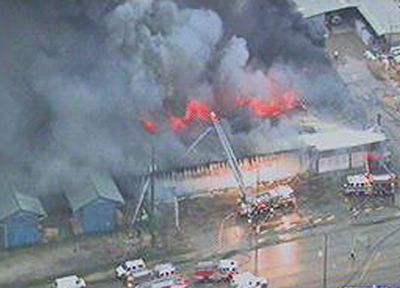 NORTHEAST HOUSTON Major fires struck two well established businesses in the Aldine area last week, causing smoke that could be seen for miles, and bringing out city and volunteer fire departments in full force to fight the large blazes.
Tuesdays fire was in the Little York Auto Parts storage yard, at Little York near Aldine-Westfield Road. It started at about 2 pm, and burned for several hours before being brought under control by Houston firemen.
Thursdays blaze started early in the morning, around 6 am at the McCauley Lumber Yard in the 600 block of Aldine-Bender Road, near the Hardy Toll Road. This blaze was larger, ultimately destroying the main office and sales building at the lumber yard, jumping to a second nearby storage building, and burning for over 4 hours before being brought under control by Houston and several Volunteer fire departments. These included Little York VFD, Aldine VFD, and Westfield VFD.

At the height of the fire, which reached 3 alarms, HFD had many of their aerial deluge trucks flooding the building with water, with minimal effect. Inside, building materials, paint, chemicals, solvents such as paint thinners, and other highly combustible items fed the fire until almost totally consumed.
HFD District Fire Chief Tommy Dowdy commented that the low blowing winds made it more difficult for firemen to fight through the thick smoke, and they had to rely on air packs and rotation of crews to get near enough to the flames.
Aldine-Bender was shut down for most of the day, as fire and rescue apparatus numbered several dozen trucks, and totally blocks and surrounded the fire location.
At the end of the day, as the fire was out and cooled, workers for the lumber yard started to clean up, and prepare to go back to work. Arson investigators were on the scene, but at press time had no indication that the fire was anything but an accident, perhaps due to faulty wiring.
In the Little York fire, investigators pointed toward the theory that workers using acetylene torches to cut apart the junked cars may have accidentally caught some of the fuels, such as gasoline or oil, on fire that remained in the vehicles.
District Chief Arthur Broussard said that no one was injured in the blaze, and damage was mostly confined to about a dozen cars in the salvage yard.
However, because of the thick black smoke from the fire, it actually looked worse than it was. Traffic on Little York was blocked by emergency vehicles, most from the city of Houston, from 2 oclock when the fire was discovered until late in the afternoon.
Arson investigators have not finished their report but theorize that it was an accident. The Auto Parts business has returned to normal service by the end of the week.

Area high school teams that were headed to the state playoffs, found themselves derailed last week, with one exception.
Kingwood, who ranks number two in the state, defeated Clear Lake last Saturday at Campbell Center 59-51, to win the opportunity to go to state Region III-5A finals. This is the third time they have gotten the chance to go into the state playoffs.
Scoring was led by Mike Singletary, with 25 points, and Trevin Harris with 21. The game was close, with the lead exchanging until the last quarter, when the Mustangs pulled away with scoring and defense.
They will play the first quarter-final game on Friday. At presstime, the opponenent had not been announced.
In other area action, Forest Brook played Worthing on Friday, losing 69-61 and ending their season run with a 26-11 record.
Aldine ISD fans suffered two losses in the last week. Nimitz, highly regarded as the team to beat, was stunned by the announcement of an academically ineligible player in their 74-72 win in the III-5A game with Hastings last Saturday.
Earlier, the Aldine Mustangs had lost to Madison 87-73, ending the season with a 33-2 record. 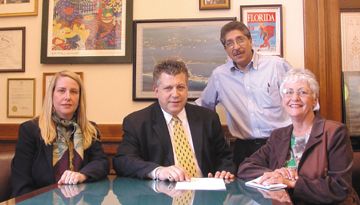 State Representative Kevin Bailey joined North Houston community leaders in support of legislation by Rep. Betty Brown, of Kaufman County, to give counties regulatory authority to control amplified music in unincorporated areas. The legislation is co-authored by Representatives Brown and Bailey.
The peace in some residential communities in my district is beingdisturbed by amplified music sometimes it comes from businesses over a mile away; in other cases its a neighbor having a very loud late night party thats keeping everyone in the area awake, said Rep. Bailey. Law enforcement officers are telling us that current law does not give them sufficient enforcement authority to deal with this growing problem.

Unincorporated areas of the county are home to many businesses and industries that are opposed to any type of restrictions on noise. Rep. Bailey and Rep. Brown joined forces this legislative session to find language that would satisfy the needs of residential communities without negatively impacting the businesses. In prior sessions the County Affairs Committee has refused to allow any legislation out of committee that business organizations opposed.
Teri Koerth, Executive Director of the Airline Improvement District, told the committee, One of the most common complaints that I receive is regarding loud noise. I have received so many calls regarding this particular issue that we have a dedicated page on our website advising residents of what to do if they constantly face this issue. Koerth continued, However, the only recourse for residents is to call the Sheriffs department for relief. When the Sheriffs department arrives to address the situation, their hands are virtually tied as they have no state regulation that specifically governs the enforcement of noise and sound levels. It is my understanding based on conversations with the Sheriffs Department, that the only way they can address this situation is through a penal code that governs disorderly conduct which is vague and difficult to enforce.
Local residents traveling to Austin to testify in support of the legislation co-authored by Rep. Bailey before the County Affairs Committee include Reyes Garcia, President High Meadows North Civic Club; Rose Hamlin, President Northline Terrace Civic Club; and Teri Koerth, Executive Director of the Airline Improvement District.

Representative Bailey named one of the most influential legislators 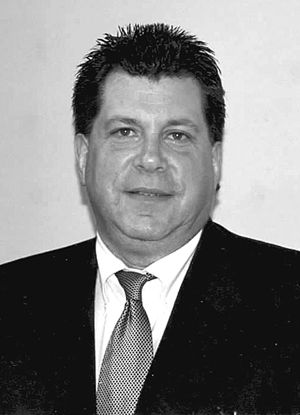 State Representative Kevin Bailey was recently named one of the three most influential legislators from the Houston region by the Dallas Morning News.
According to the news report the paper assigned points to lawmakers based on which committees they are on, their party, seniority, and in the House, how they lined up on the critical speaker’s race vote.
Dallas and Houston were compared because of their status as the state’s dominate cities and their traditional rivalry.
“We all know that Houston is still Number 1 and that will never change,” joked Rep. Bailey when informed of his rankings by a reporter for the Dallas Morning News.
The News report described Bailey as a “Power Player” with seats on top committees that give him clout and better position him to support policy goals that are beneficial to his district.