Snake sighting on the back porch

Have to pull duty on Saturdays from 0900 to 1200 every month or so. Yesterday was one of those Saturdays.
Just before noon, the Mrs. called and said there was a snake on the back porch under the shed. The snake was wrapped around the post, apparently trying to climb up and get a bird.
The snake crawled under the lawnmower and the Mrs. wanted me to know so I could get it when I came home.
Well, no snake and I walked around the yard as well. Also went out this morning several times meandering slowly with shovel in hand snake hunting.
The Mrs. had no idea what kind of snake it was, except it was about four feet long, brown and yellow looking; sounds like a water snake to me.

There were some king snakes outback and if that is what this one is, it is welcome as long as it stays out of sight and out of the garden.
Hate the thought of reaching into a tomato vine for a tomato and that thing crosses my hand or arm.
Went over to the gardening gurus house last week and admired his garden. Its a sight to see. He said he doesnt do anything special to his tomatoes except a little cotton burr compost and water on occasion. He did mention you have to pinch off suckers everyday.
His garden is like looking at something on a television show. Why if Oprah had a gardening spot on her show, Id recommend this gents garden for it is simply a pleasure to see and admire. It is amazing what a little TLC will do with dirt.
Just a reminder, postage goes up May 14th to 41 cents for first class.
Two days last week, we received somebody elses mail for two days in a row. Dont know where our mail went and it is not here yet. You think my creditors will believe me when I say I didnt get a statement?

END_OF_DOCUMENT_TOKEN_TO_BE_REPLACED 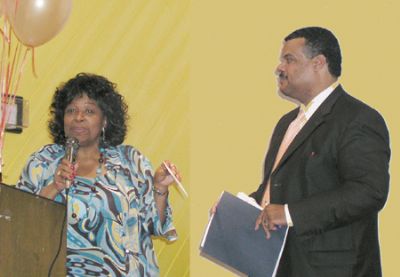 ALDINE Supporters and friends of YOUTH met last Wednesday, for a luncheon and awards ceremony to mark the 17th anniversary of the founding of this unique private social service organization.
Founded in 1990 by Sylvia Bolling, Executive Director, her vision and goal was a group to empower positive change in the lives of youth and their families.
Bolling has seen this vision succeed through her hard work and partnerships with community members. The luncheon was to thank these supporters, and honor those in the community that have helped. Participating in the ceremonies was emcee Jerome Gray of KPRC television, and Bollings daughters Shawna and Kenyetta.
Awards were given as follows: Christian Community, to Jen Van Kirk of Young Life; Community Education, to Margarita Byrum, AISD area superintendent; Service, to Juanita Honeycutt, YOUTH board member and volunteer; and Business to Gilbert Hoffman, Northeast News Publisher.

In addition, informal recognition was given to Paul McDonald for his Christian Ministry, and Steve Mead, AISD school board member, Optimist club president, and community activist, Shirley Reed, Grandparents raising Grandkids, Viola Garcia, AISD school board member and original GED teacher at North Harris College, and Martha Fowler, volunteer and early staff member. Pastor Jerry Martin received his Light of Hope Award.
In his remarks, emcee Jerome Gray recounted being raised in a poor section of Philadelphia, and the importance of a community center, Heritage House, to his life. There he learned the lesson to Never Give Up-Always Give Back, a message similar to Bollings at YOUTH.
Bolling told the history of the Youth Organization United To Help (Y.O.U.T.H.), and its start from her car and no facilities in 1990, to the acquisition of a building in 1995, and the current facility which has over 20 programs for youth and serves hundreds of children and their families. She closed by performing a song in sign language, Never Give Up, Keep the Dream Alive by Yolanda Adams.