Too many plots weaken Shrek III 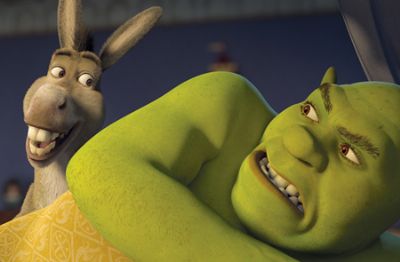 Just so you where we stand: I adored the first Shrek movie. I own the DVD and have watched it at least a dozen times. The animation, the voice acting, the musical numbers … magic.
Shrek 2 was pretty good, too. The addition of Antonio Banderas as Puss in Boots was a stroke of comic genius. And while the sequel wasnt as magical as the original, I still thought it had a lot going for it.
Which brings us to Shrek the Third.
Gah. What a snoozer.
I cant believe that a movie that is so beautifully animated and rendered could be so boring. Even most of the cast sound like theyre reading their lines in their sleep (Cameron Diaz and Justin Timberlake, Im looking in your direction). The jokes are the same tired, rehashed gags weve seen a thousand times. Sure, there were a few times I chuckled, but I didnt have the belly-laughs I got when watching the original.
Shrek the Third has three plots: 1. Shrek (Mike Myers) dealing with the Mega-Angst of becoming a father; 2. The king is dead, and because Shrek has Mega-Angst about becoming king (because for some reason, the kings Daughter By Blood, Fiona, cant become the monarch), he goes in search of Arthur (Timberlake) to take the crown; and 3. Prince Charming plots to assume the thrown while Shrek is away on his Quest, leaving Fiona (Diaz) and a gaggle of princesses to defend the land of Far Far Away.
Thats a lotta plot  and it gets in the way of what makes a good Shrek movie. Its the relationship between Shrek and his friends that makes the movies great  the comedy of diverse personalities, not self-consciously hip pop culture references.
I really cant recommend that you pay full price to see Shrek the Third. Catch it at a matinee if you simply MUST see it. Otherwise wait for it to hit the dollar theater or home video.

From Sunday to Sundae

The Rev. Kristi Shay Moore is a young Presbyterian Minister back East. She has been in the pulpit, perhaps some ten or twelve years. A couple of weeks back she stood in the pulpit and did a fine sermon on Extreme Church Makeover.
As you might expect she used illustrative stories from some of the current happenings in our society including a TV show or two. Space does not allow me to talk about her entire sermon but I would like to tell you one of her stories.
This history lesson explains a little about the makeover (perhaps extreme) of our society in the past several years.
Go back some fifty, sixty or so years, to the days of my youth, and one would find the local ice cream confectionary a standard on almost any main street in villages, towns and cities across the land. Many associated with drug stores. Rev. Moore brought back some good memories.
She told of a businessman from Wisconsin named Smithson who was the owner-manager of such a store. It was popular amongst the town folk.
On warm afternoons these folks headed for Smithsons confectionary and ordered these cool, flavored desserts. They would sit at a table eating ice cream and having friendly discussions with their neighbors.
Many times Smithson found he was particularly busy on Sunday afternoons. That, he found, was a problem! Huh! How could being busy on a Sunday afternoon be a problem you ask?

Smilingly the Pastor explained it this way. One does not go back far until our society was much changed from what we see today. Little was open on Sundays back then and deliveries of ice cream? Never! Smithson found himself frequently running out of ice cream when business was still good. Refrigeration being what it was then, ordering more on Saturday was not the answer.
The enterprising owner had a stroke of genius. On these hot Sunday afternoons he began stretching the ice cream he had available by adding toppingshot fudge, strawberry, cherry, and a variety of other flavors. The ice cream went further and his additions were popular. You guessed it; he began calling his new concoction a Sunday. Everyone was happy!
Well, not quite, some of the religious folk of the day were upset Smithson was taking the name of the Sabbath Day and turning it into an ice cream treat. Not to be outdone, our neighborhood businessman merely changed the name from Sunday to Sundae. Now you have it.
And the treat grew and grew until now we enjoy these hot fudge, strawberry, cherry, etc. ice cream treats every day of the week. More power to Smithson. I love a Sundae!!
Such are the people, places and things that have touched my life in my West Virginia home!

Up and at it early this morning and managed to get in some fire ants before 0700.
Got a fresh (skint) pork picnic in the oven that was started last night @ 1900. That is 12 hours @ 325° and so tender the bone will pull out very easily. A fresh pork picnic @ 77¢ lb is hard to beat if you eat the poke meat.
Had lunch with old buddy Dufus here a while back; he was surprised that I had broke down and finally got cable for the television after all these years. He called me a tight old wind and said I was as tight as his dad.
One must admit by having the high dollar cable the food network shows are worth their time. Know what E V O O is? Thats what Rachel Ray calls extra virgin olive oil and she uses it frequently.
Been on the road a lot lately and happened to pick up Paul Harvey one morning. He is a very interesting fellow to listen to and has a few words of wisdom at times; hes also funny.
He mentioned something about this church getting its hand dryer torn off the wall. After it was replaced by an electric hot air machine, somebody wrote on front of the machine: For a sample of todays sermon, press this button.

Got invited to the Chamber of Commerce across the river last week to hear Congressman Ted Poe. Anything for a free meal where they use real napkins and the food was prepared by the San Jacinto College Culinary Department.
After nearly 30 years living here in the same ole house on Goose Creek, the Mrs. made a statement that she would like to move because of the neighbor on one side.
At times there appear to be numerous persons staying in the house with as many cars outside double and triple parked in the street.
They do not mind throwing trash out of their cars which usually blows into our yard.
This subdivision has deed restrictions and at one time or another, this neighbor is violating them from grass growing in the driveway, trash cans out front, not mowing, to keeping a mop bucket and mop out front of his fence.
Their hours and ours are different on weekends as we go to bed before sunup. Not these people. Seems like it is party time each weekend or something.
If I catch the one who is dumping his ashtray out onto the street, he will be confronted, just hope it will do some good.
Dont want to move, we were here first and dont relish the thought of a house payment by moving.
Told the Mrs. Im keeping mine locked and loaded, aint moving. Guess the neighbor dont know southern hospitality or common courtesy. 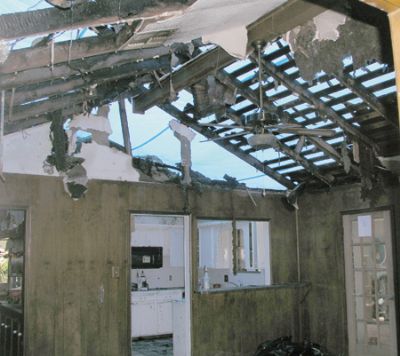 NORTHEAST HOUSTON An early morning fire, last Monday, June 4th, destroyed the Greenspoint area home of State Representative Kevin Bailey.
Bailey and his wife Marilyn were awakened about 3 a.m. by unusual noises and the smell of smoke, and they went through the house trying to find the source. As Mrs. Bailey approached the kitchen, the ceiling collapsed in front of her, and she could see the flames above in the attic space. Although the home had smoke detectors, they did not sense a fire in the attic, investigators said.
The Baileys immediately left the house, calling 9-1-1 as they went. After some delay explaining the street name, they awaited fire trucks. However, when the fire raged and the wait became extended, Mrs. Bailey drove to the Houston fire station nearby on Aldine-Bender. The trucks were just leaving, and they all returned to her house.

Firemen were unable to save much of the roof structure, and estimated that it had been burning for quite some time before the Baileys discovered it. The rest of the house below was ruined by water and smoke damage, and will have to be razed and rebuilt, according to Bailey.
Fire department investigators believe that the fire started in the aluminum wiring to an air conditioning unit in the attic. This type of wire material was common when this house was built about 20 years ago, and is known to overheat at times. Baileys said the a/c had been acting erratically recently, and they had planned a service call.
Although the Baileys escaped the house safely, most of their possessions were destroyed. Several cats were able to escape, but one is still missing.
Bailey issued a statement, saying I am thankful for the quick response of our local firefighters and the continued support of friends and neighbors. The outpouring of concern from the community is appreciated during this stressful time.
Bailey has lived in this home in the Imperial Valley subdivision since 1988. He serves as a state representative for District 140. 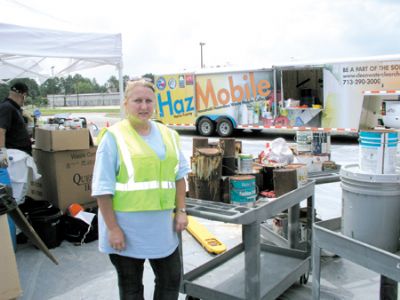