Pirates 3 suffers from too much plot, not enough Depp 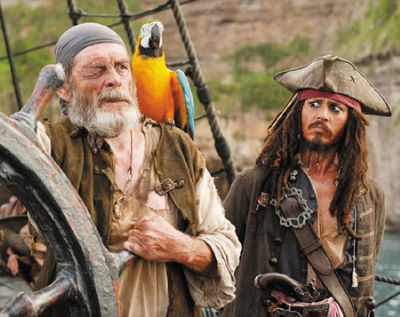 The third (and hopefully final) installment of the Pirates of the Caribbean series suffers from the misapprehension that more is better.
Sometimes it isnt. And in the case of At Worlds End, more is too much: Too much plot, too much exposition, too much Keira Knightly and Orlando Bloom (Zzzzzzz), and at nearly three hours in length, too much movie.
What Pirates doesnt have enough of is Jack Sparrow. Lets be real here: Johnny Depp carried the first movie. It was his portrayal of the swishy, swashbuckling savant Jack Sparrow that made the first movie the hit that it was. It wasnt the love story. It wasnt the special effects. It was Depp. Depp. Depp. … Period.

In this film, there arent enough scenes of Depp doing what he does best, chewing up the scenery as the scheming, bumbling cad we adored from the first film.
Instead, we get a convoluted plot concerning the alliance between the East India Company and Davy Jones and the search for nine pieces of eight (yes, you read that right) and a pirate congress and plots within plots and people sitting around yelling Arrrr! and talking about what theyre supposed to be doing  instead of just DOING IT.
But no. For a three-hour pirate movie, its a crime that we have to wait nearly two hours before we see a monkey get shoved into a cannon. A pirate movie should have PIRATE STUFF in it. Not a bunch of talking. And certainly no boring love story  especially when the two people in love are portrayed by two of the most dull, emotionless actors on the planet.
Keira Knightly, whos looking more and more like an anorexic catfish every day, thinks that projecting emotion is simply a matter of sucking in ones cheeks. The more she sucks, the more emotion shes supposedly emoting.
Orlando Bloom reads every line as if hed just had a chemical lobotomy performed. Needless to say, SuckFace & Durrrrrr pretty much ruined most of the movie for me.
I cant recommend At Worlds End. It had the potential to be a Great White Shark, but instead, its just a blowfish.
GRADE: D

END_OF_DOCUMENT_TOKEN_TO_BE_REPLACED

By Gilbert Hoffman
Northeast News
As a prelude to the 25th Annual Intercontinental Airport Festival, a Scholarship Awards Luncheon was held last Thursday at the Wyndham Hotel Greenspoint.
The scholarships and festival are sponsored by three area Chambers of Commerce, in conjunction with the Houston Airport System. The Chambers are the Houston Northwest, the North Houston Greenspoint, and the Humble Area. The scholarship program was originally started by the Houston Northwest Chamber, and has grown to include the others.
Fifteen scholarships of $1500 each were awarded to students who applied, on the basis of academics and community service. These students are expected to go to college to pursue careers in aviation or hospitality, according to Committee Chair Steve Hrncir. Scholarships were sponsored by local businesses and individuals with an interest in the airport system.
Scholarships went to students from the Aldine, Klein, Cypress-Fairbanks, Spring, Humble school districts, and NHMCCD college.
This is the 25th year for the Airport Festival, which featured public displays of current and vintage aircraft, games, drawings, exhibits, music from live bands, zoo mobile, airport rangers, search dogs, free food and drink, and door prizes.
The Airport Festival was held at Continentals 777 Hangar Building E at the airport. The theme was IAH-Houstons Silver Lining, a reference both to the 25th anniversary and the airports impact on the region.

END_OF_DOCUMENT_TOKEN_TO_BE_REPLACED 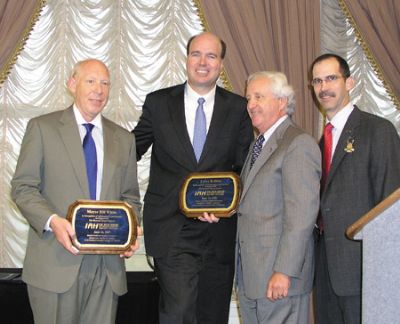 Hundreds of well-wishers packed the ballroom of the Wyndham Hotel Greenspoint last Thursday, to honor the recipients of the Airport Festival Scholarships, and to hear leaders of the community talk about the progress that the Airport System has made over the years, and the importance it has to the regions economy.
Pilot Capt. A. J. High recounted how he was the first official plane to land at the new Intercontinental Airport in 1969, flying for Texas International.
Mayor Bill White extolled HAS for being the best air system in the world, and noted that Intercontinental airport now has risen to have the second most flights in North America. He noted that Houston has historically invested in public transportation, which has fostered the growth in the region.
Continentals Larry Kellner noted that his airline now land 750 flights a day at IAH, the fastest growing airport in the nation. He thanked those who supported Proposition G in the last election, necessary to support the airport.
Rick Vacar, Director of HAS, announced that money had been appropriated for a new master plan for IAH, and the airport will continue to grow, with two new runways planned.