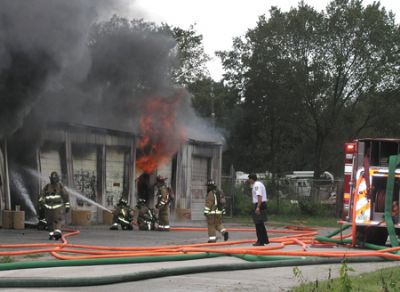 Harris County Commissioners approved an agenda item last week to take advantage of a new law authored by State Representative Kevin Bailey. The Commissioners instructed the countys Salvage Yard Committee to reconvene and consider the logistics for permitting automotive salvage yards in light of the passage of HB 178.
The committee has been instructed to report back to Commissioners Court at the September 25 court meeting.
I am pleased that Harris County is moving forward to implement my legislation to clean up junkyards in our community, said Bailey. For too long we have witnessed these nuisances in our neighborhoods. Finally we will start to see these eyesores cleaned up. And I will continue to fight to make other improvements to our community.
Rogue businesses are encroaching on North Houston homes and churches in clear violation of a state law that requires a 300-feet setback from a church, home or day care.

Junkyards are displaying their damaged vehicles at the edge of the roadway despite a law that prohibits storing or working on vehicles outside the fenced area. Fences should be set back 50-feet from the right-of-way of any public road the fence facing the street should be eight foot with all other sides having a fence that is six feet.
Baileys legislation provides a mechanism for the county to enforce existing state laws.
County governments have the authority to regulate automotive salvage yards and junkyards in its unincorporated areas, but the annual permit fee of $25 was insufficient to defray the cost of regulation. Harris County did not have the resources to exclusively devote to regulating them.
The new law by Bailey will increase the annual fee to $500 in order to provide sufficient funding for a dedicated workforce to police these businesses. 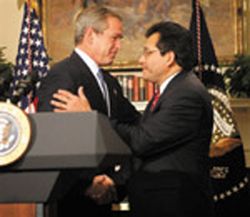 By BOBBY HORN JR.
Alberto Gonzales, the U.S. Attorney General who has ties to the Aldine area, resigned his post last week amidst criticism from both Congressional Democrats and Republicans over his handling and testimony on the firing of eight U.S. attorneys and his support of domestic wiretapping without court orders.
Gonzales is a 1973 graduate of MacArthur High School. Also a Rice University graduate, Gonzales served in the U.S. Air Force and graduated from Harvard Law School. Before becoming attorney general, Gonzales was a member of the Texas Supreme Court and Texas Secretary of State.
The resignation announcement came on Aug. 27. The weekend before that Gonzales met with President George W. Bush at his Crawford ranch to inform him of his decision.
During an address to reporters Gonzales remained upbeat about his time as A.G.

I often remind our fellow citizens that we live in the greatest country in the world, and that I have lived the American dream, he said. Even my worst days as attorney general have been better than my fathers best days.
White House officials say that Gonzales maintained that he did nothing wrong, but that the surrounding controversies were creating an unneeded distraction in the Justice Department.
During his confirmation hearing to become A.G., Gonzales also defended the White House position of detaining terror suspects for long periods of time without access to attorneys or court appearances.
In testimony before Congress over the U.S. attorney scandal, Gonzales response, or lack of response in some cases, brought threats of criminal contempt charges from ranking Democrats as well as Republicans.
Bush attacked congressional leaders for their criticism of Gonzales, saying that he was a good man who was impeded in his work by those who sought to drag his name through the mud for political reasons.

If it were a comedy, it might be called How Perry Cut Shirley.
Dr. Shirley Neeley, the former superintendent of schools in Galena Park who Gov. Rick Perry named the Texas Commissioner of Education in early 2004, left that job July 1, after learning in mid-June that Perry wouldnt re-appoint her.
It started better. On Jan. 12, 2004, Perry called her a results-driven educator (whose) focus on high standards and classroom excellence, her refusal to accept the status quo or conventional wisdom, and her proven track record of success make her the ideal Texan to lead the Texas Education Agency.
At the end, The Governor felt that it was the appropriate time for new leadership and a new energy at the Texas Education Agency, said Perry spokesman Robert Black. Over the last few years, he has been disappointed in the agencys lack of action to deal with the accusations of cheating in our public schools. He looks forward to bringing in someone who will take decisive action to deal with this issue and be willing to work hard to take education in Texas to the next level.
Neeley, the first woman to head the TEA, took her ouster like a  well, philosophically.
I can compare my situation to that of a superintendent when a school board decides to take no action or not extend their contract, she wrote in a letter to TEA employees. Anyway you look at it, the message is clear: when it is time to go, it is time to go.

Although evidence of widespread cheating on the Texas Assessment of Knowledge and Skills test, known as TAKS, may have been a big part of it, some think Neeley had tired of cheerleading for Perry. And there was tension with her deputy commissioner, Robert Scott, who served as interim commissioner before she arrived and now since shes gone.
Neeley had overseen impressive improvement in student test scores during her tenure at Galena Park, despite its lower middle-class status. She had been appointed by Perry in early 2004 to succeed Dr. Felipe Alanis. His tenure of just over a year as Texas Education Commissioner had ended on July 31, 2003. When Alanis left, Perry sent over his staff education adviser, Robert Scott, to temporarily head the agency.
Scott, 38, was no stranger to TEA. He was there from November of 1994, following a stint on the Washington staff of U.S. Rep. Gene Green, D-Houston, until early 2001.
Wizened viewers say Neeley had gotten infatuated with the TEA post before she ever took it, and made a mistake in not claiming more power at the outset. Agency employees had been reporting to Interim Commissioner Scott, who reported to the governor. Neeley agreed to keep that arrangement  becoming, in essence, a figurehead.
Neeley said when she took office that teachers and administrators should not fear school choice AKA vouchers, a Perry pet project. But vouchers not only never got off the ground, they have lost ground.
An occurrence in mid-2005 may help explain why Neeley began to assert herself. Perry invited her to a press conference. During it, he unveiled an executive order that 65 percent of state money for schools be spent in the classroom.
It was the first shed heard of it. She was blindsided. She had no part in developing it, but was left, flat-footed, to try to explain and defend it to the states superintendents and principals.
It was then, observers say, she began to regain her voice. A seasoned adminstrator as a superintendent, she began to assert herself more in policy. She decided her loyalty wasnt to the governors politics, but to superintendents, principals, teachers.
Although as recently as the end of May Neeley told a reporter that because her re-appointment hadnt come up all through the spring legislative session, she was confident of re-appointment. She was wrong.
The Dallas Morning News editorialized against Perry picking Scott as his real rather than interim commissioner, on grounds he was around when the TAKS test problems occurred, and the agency needs someone with experience in classrooms or school administration. But sources say the states superintendents would prefer Scott to some alternatives mentioned.
Those include four who served with Perry in the Texas House of Representatives: former House Education Committee chairman Kent Grusendorf; Texas Association of Business head Bill Hammond; former House Appropriations Committee chair Talmadge Heflin; and Ric Williamson, chairman of the Texas Department of Transportion. Others mentioned include former Bush Administration education official Sandy Kress, and voucher and alternative teacher certification supporter Jim Windham of Houston.
The Austin American-Statesman editorially suggested appointing former state Sen. and acting Lt. Gov. Bill Ratliff, a Mount Pleasant Republican who chaired the Senate Education Committee and now heads up Raise Your Hand Texas, a group dedicated to supporting Texas public schools. But in a Rick Perry Administration, that is unlikely.
Meanwhile, Neeley, 59, ((DOB 6/18/48)) wrote on the TEA website that she revisited priorities after her melanoma returned May 24, after 22 years free of cancer.
We need to remind ourselves whats really important in life, Neeley said: husband Bill, her 80-year-old mother, three precious grandsons, daughter, son-in-lawand time to ride Harleys, continue ranching, travel and cross-stitch.
Adios, TEA.

Eating my way across the Carolinas

Had to conduct some bizness the other day in Liberty, Texas. Thats across the Trinity River and up some from Day Lake if you know where that is. Anyway, found myself on the courthouse square at a little buffet style restaurant called SHARONS KITCHEN.
One of my banker friends recommended this place and said they also cater to the Lions Club and Rotary Club of Liberty, adding the food is very good and priced right as well.
The food was good and plenty of it, so go hungry; they are open seven days a week.
Do enjoy checking out new places to break bread because it is a change from the same ole same ole.
Back when I was on the road working for Liggett & Myers and for Purex, you can bet I checked out new places and enjoyed it immensely. Mind you now this was on the eastern seaboard between Kinston, North Carolina and Georgetown, South Carolina.
Ate dozens of Hardee burgers enough to last a lifetime and it has.
Three places stand out in the recesses of my long term memory although their names have already faded away.

A boarding house in Tabor City, North Carolina had a daily buffet dinner (lunch to you city folks) which was as good as any Ive ever had to this day. The one thing that sticks out particularly about that boarding house was the desserts. When in season, a huge strawberry shortcake was put before you and delicious it was. Another time would be a fresh peach shortcake.words cannot describe the tastiness of those desserts.
Two other places are pool halls, one in Tabor City, NC and the other in Wilmington, NC.
Tabor City would fry their hotdogs in oil over a piece of steel with the fry bowl battered down from it. They served Cocolas (Coca-Cola) in the small bottles if you remember those.
The pool hall in Wilmington was another place that was most unique in its own way. It had the usual burgers and hot dogs and they also had Bean of the day. Simply one of the many beans and a few peas at times served in a bowl with a scoop of onion and two slices of bread. It took a large Coke to wash those down at times and they sure were good.
How dry is it?
A buddy of mine said Alabama is so dry:
The Baptist have started sprinkling.
The Methodists are using a wet wash cloth.
The Presbyterians are giving rain checks and
The Catholics are trying to turn wine back into water.
Charlie A. Farrar is author of many columns of homespun Georgia thoughts, that have appeared in local newspapers. He has published a book with some of the best, Two Cents Worth. To purchase a copy, send $12.95 to NEWSpaper, PO Box 405, Highlands, TX 77562.