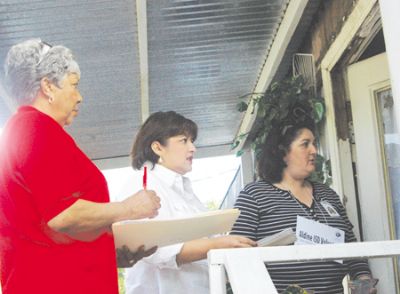 By MIKE KEENEY
In the effort to reduce the dropout rate, Aldine ISD mobilized to encourage students to come back to school.
The campaign had two phases. The first part had dozens of volunteers and staff telephoning the homes of approximately 1,500 AISD students who failed to show up during the first week of school. The phone-bank operation on August 30 and August 31 was in advance of the door-to-door campaign on Saturday, September 8 to encourage dropouts to complete their education. Volunteers and staff were able to reach hundreds of students or their families during telephone operation.
The results of the phone calls also provided AISD representatives with data to map out the homes of 900 students who would be visited during the Reach Out to Dropout Walk. The walk proved successful as more than 300 volunteers that participated in the Saturday event reached more than 600 students, their families or neighbors throughout AISD.

To help students register, all of the high school campuses were opened on the day of the walk.
Of the students reached through the door-to-door phase, 15 dropouts enrolled that day while another 61 committed to enroll this week. More are expected to enroll or call to clear up student records.
Reaching out to dropouts is not a one-day effort, said Ben Wilson, AISD assistant superintendent of community and governmental relations and one of the organizers of the campaign.
The school staff has been working since the first day of school to clear up enrollment records. This effort has resulted in finding hundreds of students, encouraging them to return to school, and even clearing up records in the cases where these were not accurate. We believe we will continue to see more students returning to school because of this effort.
There are many reasons why students dropout of school. In many cases, the families or students have moved away and failed to notify the school, thus leaving records incomplete or labeling the students as dropouts. For others it is a matter of life choices and personal or family circumstances. And even lost interest may have played a role in their decision to leave school.
AISD has counselors, social workers and intervention specialists who can assist dropouts in completing their education. For those who work during the day, the Hall Education Center has a program that allows students to earn their diploma while attending school in the evening. And all of the traditional high schools assist students who are pregnant and want to complete their high school education.
Reach Out to Dropouts receives strong support from district and national leaders. At this years event, U.S. Congressman Gene Green encouraged the door-to-door volunteers at MacArthur Senior High School while many AISD administrators hit the pavement including all seven school board members.
For more information on how you can volunteer in this effort, contact Ben Wilson at 281-985-6202. 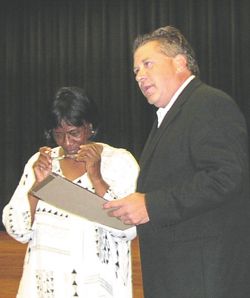 By ARLENE NICHOLS
The Aldine Harris County Chapter of Grandparents raising Grandchildren held their fourth annual conference this week at the M. O. Campbell Educational Building on Aldine Bender. Attendees began the morning with greetings from Dr. Wanda Bamberg, Aldine ISD Superintendent and a tribute to Grandparents sung by Sidney Reed, granddaughter of the groups President Mrs. Shirley Reed.
State Representative Kevin Bailey addressed the gathering saying,
Grandparents who take on the rewarding but challenging role of raising a child help assure that thousands of Houston-area young people receive the care they need. The Aldine Harris County Grandparents Raising Grandchildren Support Group plays a vital role in helping these families stay together and prosper by providing vital information to the Grandparents.

Texas ranks second among the fifty states in the number of households with more than 250,000 grandparents raising grandchildren. Frequently the custody arrangements with parents are informal leaving the grandparents with many legal challenges when they try to access needed educational, medical and mental health services for the children.
The annual conference offered events for both adults and children featuring numerous professionals and public-service officials presenting workshops on a wide variety of topics. The group sessions for adults included discussions on legal issues, social service and well-ness programs, Social Security and Medicare benefits. The childrens sessions included topics ranging from Who Am I and Whats My Name? to Man, This School is a Drag and Breaking the Cycle.
The level of participation by local Grandparents, the school district and government agencies was overwhelming. We received an impressive amount of information from the speakers at the breakout sessions, said President Shirley Reed.  It was particularly gratifying to see the level of participation by teenagers in the group discussions led by Mr. Dalbert Galloway.
Among the other speakers was Congresswoman Sheila Jackson-Lee. Reed said that Jackson-Lee spoke eloquently about the role of grandparents and she appreciated her attendance,
Local sponsors for the event included North Houston Bank, area businessman Steve Mead, Harris County Area Agency on Aging, Amerigroup, Evercare, and Jackson-Lee. Teachers from Hinojosa EC/PK and Head Start Center provided considerable support for the event.

Return of the hummingbirds

The hummingbirds are in migration across Texas on their way to Central and South America for the winter. If you have feeders up, you know what Im talking about.
A magazine had a picture of a lady sitting and holding a small red container with hummingbirds gathered around on her finger. Great photo opportunity, so yours truly tried attracting the birds. They would hover about two feet from me but no closer. It is amazing to see a hummingbird that close and to hear the small bird with the drone sound of their wings flapping at 15  80 times per second.
The hummingbirds paid more attention to me than getting a drink.
While reading about the woman holding the birds, the article said it says it took a few days for them to get used to her hanging around next to the feeders daily for them to land on her finger.
Didnt know it but hummingbirds are carnivores and the sugar water is just for fuel to power their fly catching activity. They have to fly south to get the bugs that cant handle freezing weather.

Several years ago, yours truly walked up behind a hummer on a feeder and picked it up. Lil thing must have been sleeping as it was so easy to do and I let the Mrs. hold it for a second before letting it go. Thats bragging rights.
This hot weather has brought my peppers into the production mode if they are picked regular.
Granddaughter was here yesterday so she and the Mrs. picked peppers, bringing in nearly a colander full; mostly Tabasco Peppers by the front door and Cayenne from the back garden.
Having that many peppers, I couldnt see letting them go to waste so I whooped up a batch of chowchow this morning using one head of cabbage and four yellow onions. No green tomatoes to be found at several supermarkets as they are scarce as hens teeth this time of year.
Tried sampling some of the finished product with Fritos and only took two bites to say no mas. Not sure if allowing this batch to sit for six months or so will calm it down and take some of the heat out or not.
Read an interesting note the other day it says, a persons true character is revealed by what he does when no one is watching.