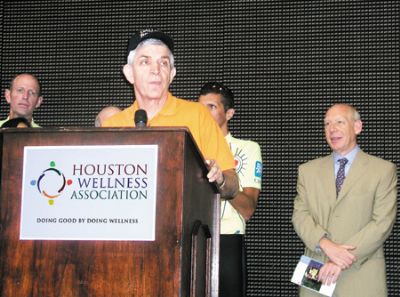 NORTHEAST A team of bicyclists, who started in Connecticut headed by Cigna president David Cordani, pedalled into Gallery Furniture last Friday, Sept. 21st to bring attention to the Worksite Wellness Initiative scheduled to take place this fall citywide.
Also taking place in the announcement were Gallery Furnitures Jim McIngvale, Houston Mayor Bill White, Kelsey-Seybold head Dr. Robert Dickinson, and Houston Wellness Assoc. Exec. Dir. Jonathan Lack.
The Houston Wellness Association, a new organization, has the mission to advance the health and wellbeing of the Houston community. It was developed by members of the Mayors Wellness Council Strategic Planning Committee.
The publicity is for the Worksite Wellness Conference, to be held Friday, Nov. 16th at Minute Maid Park/Union Station. This program for employers is meant to help improve the health of employees and companys bottom line.
Participants are scheduled to be Senator John Cornyn, Astros owner Drayton McLane, Dr. Vivian Ho of the Baker Institute, and Trayce McDaniel of the Greater Houston Partnership.
Additional information is available. Contact Jonathan Lack, Houston Wellness Assoc., 713-357-9515.

END_OF_DOCUMENT_TOKEN_TO_BE_REPLACED

Jumping at the Mall 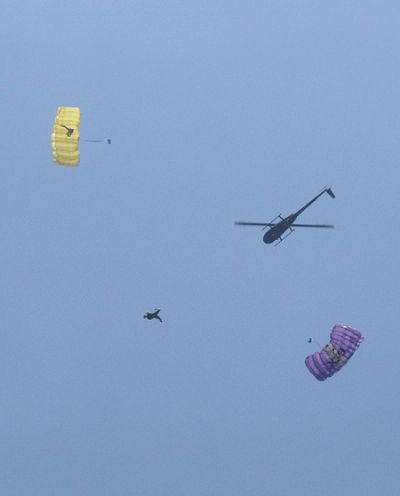 As part of Law Day, held at the Greenspoint Mall last Saturday, a helicopter took off, and from about 1000 feet above the ground, 3 young parasailers jumped from the open doors of the helicopter and landed on the parking lot below, at almost exactly the same spot they had just left. Other events at Law Day included Public Safety groups with displays of equipment, inside and in the parking lot of the Mall.

END_OF_DOCUMENT_TOKEN_TO_BE_REPLACED 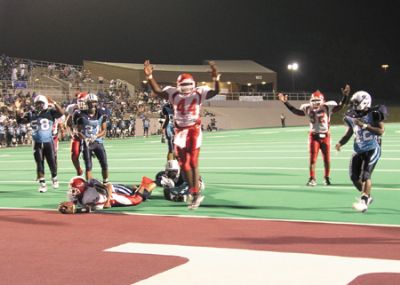 THORNE STADIUM The annual classic match between the MacArthur Generals and the Aldine Mustangs was held last Friday night, and the Generals dominated the game with strong offense and defense lines, winning the match 28-17.
However, Aldines QB Darron Thomas, excelled in his passing game. He completed 15 of 21 passes, for a total of 235 yards and 1 TD. Another outstanding performance was by MacArthurs Jacqualyn Harmeson, with 27 rushes for 163 yards and 2 TDs.
The score was fairly even through most of the game, with a 7-7 tally at halftime. Aldine excited the crowd by passing in the first quarter 33 yards for a TD, the first score of the game. In the fourth quarter, the Generals took a commanding lead, and stopped an Aldine drive, forcing them to settle for a field goal. MacArthurs Isaac Medina intercepted a pass near the end of the game, putting an end to the Mustangs effort to come from behind.

END_OF_DOCUMENT_TOKEN_TO_BE_REPLACED

Are you feeling superstitious?

While preparing breakfast for the Mrs. this morning, there was a double yoke in one of the eggs. Having seen this several times before being the chief cook of the house, its no big thing but does it mean anything? Maybe more yoke for the buck?
Probably not but I ran it through Googleand discovered one site says supposedly it means someone in my family is going to die. Hog wash, pure and simple!
My right hand itched this morning as well, so what does that mean? Actually it was the side of my hand, not the palm, so close but no cigar maybe?
Again searching Google, a site says I am to come into money. Hummm, sounds interesting. Another site mentioned the possibility of having a pinched nerve and to see a doctor.
Another says if it is your right hand that itches then money is coming to you, but dont scratch it because that stops the money from coming. Additionally if your left hand itches then scratch away cause you will soon be paying money.
Or your hand could be dry and in need of moisturizing.
Ho hum you say? How about when your nose itches, what does that mean?
One response says you are going to kiss a fool, while one says you are going to have a fight. Then one says you are going to be visited by someone unexpectedly.
This gets better as one site says that the person you like is thinking about you or talking about you. Another says when your left hand itches you will hear from an old friend and the right hand indicates you are getting money.

This is no doubt superstition, but then again an interesting topic for instance what do they say about somebody whose eyebrows meet? Trust not the man whose eyebrows meet. For in his heart you will find deceit. You believe that?
How bout when your ears are burning? Mean anything? Maybe somebody is talking about you. Also says small ears denote a delicate character and thick ears indicate a person of sensual/coarse nature.
Thin angular ears mean a bad temper while a long prominent ear is of a person with musical inclinations. Would a prominent ear include someone who has ears that look like a car with the doors open? The larger the ear lobe, the greater the intellect.
Lets not forget the lips and teeth. The lips will itch or tingle when someone is about to kiss you. If you bite your tongue while eating, then you have recently told a lie.
A large gap between the teeth means lucky in life; Large teeth mean physical strength while small, regular teeth mean careful and methodical in their habits.
Also, never eat anything when a funeral bell is tolling or a toothache will follow.
Its supposed to be unlucky to cut fingernails on a Friday or Sunday.
Specks on your finger nails mean: yellow is death, black is ill-luck and white is a good fortune to come
Itching feet means a journey to somewhere new.
Flat feet indicate bad temper. To avoid bad luck, do not enter a building left foot first to avoid bad luck.
Sneeze once for a wish, twice for a kiss, three for a letter, four for something better.
If you buy a broom or brush in May, youll sweep the head of the household away.
Crows  One is bad, twos luck, threes health, fours wealth, and fives sickness and six is death.
If a plow kills a daddy long legs the cows will go dry.

END_OF_DOCUMENT_TOKEN_TO_BE_REPLACED

A trip down Memory Lane

Over the past month or so I have had some e-mail conversations with a resident of the Woodlands. Her name is Constance Watters Miles who became a Texan about 10 years ago when her husband got transferred from Pennsylvania to The Woodlands.
I became interested in Constance a couple of months ago when I picked up a fine tourist magazine that had a splendid article she had written on Rock Springs Park, a former amusement park. The park was located many hundreds of miles north of The Woodlands at the spot where Ohio, Pennsylvania and West Virginia join together some 100 or so air miles from the Canadian border.
Although I am certain I am a few decades older than Constance her article took me back to the days of my youth. She talked of taking an annual excursion train to Rock Springs Park from her hometown of Oakdale, Pa. In addition to Oakdale the train traveled through other internationally known towns such as MacDonald, Midway, Noblestown and Sturgeon, Pa. heading for a day at the park. Oakdale was surely the largest with about 1,400 residents.
She quoted the Oakdale newspaper of that day as saying 250 Oakdale Citizens Attend. All Business Houses Closed for the Occasion. The railroad delivered hundreds upon hundreds of daylong visitors to the park from surrounding areas of Ohio, Pennsylvania and West Virginia.

Ah, the days of my youth. I can well remember our special day in the 40s and early 50s when the Pennsylvania RR excursion hit the northern panhandle of West Virginia and we traveled north to Rock Springs. Of course our train picked up kids and adults by the hundreds in other internationally known towns such as Warwood, Short Creek, Power, Beech Bottom (my hometown) and other points north.
I have no idea how many people were on that train but there where hundreds as every passenger car was filled to the brim. Some stood over most of the 50 or less miles from the furthest towns to the park. I can well remember making the trip, say between age 10 and 16, and the enjoyment of a day at Rock Springs as well as the trip going and coming home. We were all dead upon arrival back home. But Constances newspaper headline was quite correct. These small towns closed down on this particular day. Anyone who was anyone was on that train.
I remember one year I was not and I lived hard that day. I must have been in my early teens and wanted a major league baseball. I made the request of my parents during the summer, as was the Rock Springs trip, and having limited funds Mom told me I had to make a choicethe trip to Rock Springs or the baseball. Man, what a decision!! Finally, I decided to get the baseball. My rational? The trip would last for one day, the baseball for the rest of the summer and beyond. I also suspected we would be taking a family trip later to Rock Springs so I would enjoy the park then.
I lived hard that day as all of my friends, and I do me ALL, got up early, took the train that passed by about 6:30 a. m. It was a dreadful day for me, but, I had my baseball for years later. I loved that baseball and made a sacrifice to get it.
Constances article points out that Rock Springs Park opened on Memorial Day 1897 and lasted until it closed on Labor Day 1970. It lost out to a new bridge access on U. S. Rt. 30 that connected Pittsburgh and Cleveland and points east and west. At its peak the park drew 15,000 to 20,000 daily during the summer months. Many big bands played there and she mentions Guy Lombardo, Stan Kenton and Harry James. I saw Guy Lombardo there on one visit and can remember a few others as well.
I left that area in 1954 and returned only as far north as Wheeling and Beech Bottom to visit my parents, extended family and friends. I never got back to Rock Springs or Chester. Thanks Constance for a wonderful trip down Memory Lane. I hope to meet her on one of our winter visits to Crosby and environs.
Constance has had a great career in the east and now in The Woodlands area. As I write this she is in Perth, Australia presenting a paper about her work with the deaf and blind.
Such are the people, places and things that have touched my life in my West Virginia home!
Don Springer is a writer for the Charleston, West Virginia newspapers, but he and his wife often visit in Crosby & Houston. He can be reached at touchlife@ worldnet.att.net