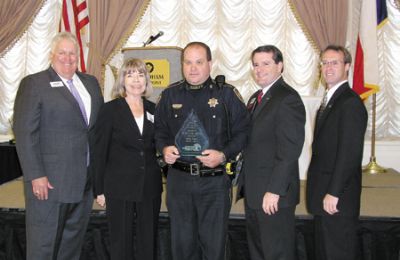 GREENSPOINT Awards for outstanding service in the field of public safety were given out by the North Houston Greenspoint Chamber last Thursday, at their monthly luncheon at the Wyndham Greensoint Hotel.
The luncheon was emceed by Jerry Lowry, past Chairman of the Chamber, and a past police officer with the Houston Police Department.
Lowry punctuated his presentation with personal anecdotes from his career, remembrances of HPD classmates, some of whom were present and award recipients, and a moment of silence honoring Pct. 5 Deputy Constable Jason Norling, who lost his life in the line of duty last week, and Prison Guard Susan Canfield of Huntsville, who also was killed in the line of duty. These cases emphasized one of Lowrys themes, that police work is inherently dangerous, and the men and women who devote their lives to this service deserve recognition and thanks, such as this awards banquet and day to day involvement with their communities.
Special thanks was extended to officers that helped organize the recent Law Day at Greenspoint Mall:
HPD Chuck Bertels, Kathy Janyes, HCSO John Soileau.
Awards were given to the following:
Community Service Award, Larry Lipton, chairman of the 1960 area Community Alliance;
Unit Service Award, to the Aldine ISD Evening Shift, including dispatchers:
Gustavo Adame, Marc Harris, Keith Warren, Renee Hall, Cpl. Sue Frank;
Special Recognition Awards:
HCSO Deputy David Willis, stopped robbery in progress;
HPD Officers David Eagan and Catherine Gentry, worked to close a slum apartment complex;
Greenspoint Mall Security, James Isaac, Max Balderrama, Robert Spencer apprehended burglary suspects with HPD help;
HPD Officer K. W. McDonald, proactive in investigating and apprehending suspects in the burglary of motor vehicles;

Distinguished Service Awards:
HPD Officers Gregory Shaull, John Malott, Brad Tikulski arrested suspects in the robbery and assault at a liquor store on Aldine Bender;
HPD Officers Jim Simmons, Jose Lopez, and Devin Farrell, apprehended a vehicle on the North Freeway with heavily armed occupants with prior arrest records;
HPD Officers Genarrow Patton, Rogolio Ramirez, who helped save the life of a baby that was not breathing by administering CPR;
Distinguished Unit Award:
To Operation Greensweep of the HPD North Division Tactical Section:
Day Shift Lt. C.J. Day, Sgt. R.L. Klotz, Officers J.B. Dillard, D. Smith, D.D. Thomas, M.D. Smith, K.R. Huey, S.W. Kutach, J.B. Norwood, K.A. Buchanan, B.K. Roland, A. Cisneros, G.E. Dillon, C.A. Farquhar, and Data Operator, civilian G.J. Deitz;
Evening Shift Sgt. J.R. Chase, Officers R. Massey, S. Burk, M. Chapnick, C. Rozek, S. Zakharia, K. Berg,l and J. Oliver.
This unit was cited for outstanding effort in a public/private collaborative effort, known as Operation Greensweep.
Utilizing both uniformed and plainclothes officers, the Tactical Section used various techniques to combat the criminal element; including crime analysis reseach and crime pattern alerts, high visibility patrols, tactical crime sweeps, street prostitution investigations, narcotics buy-bust operations, narcotics search warrants, and decoy operations in the area targeting motor vehicle crimes.
Due to the success of this collaborative effort of the police and local citizens in developing, funding and implementing this type of operation, it has become a model or template for similar operations in other areas of Houston.
Here is what they accomplished since Feb. 2007:
-643 citizen and business contacts
-556 self-initiated cases
-389 arrested and charges suspects, including 279 felonies and 140 misdemeanors
-252 municipal citations/warrants served/cleared
-seized $3.5 million of illegal narcotics
-seized $51,000 in cash, and 16 firearms.
Business Partner of the Year:
Ray Bejarano, General Manager, Greenspoint Mall, a former police officer himself, cited for donations of space and support for HPD;
Officer of the Year:
Harris County Sheriffs Deputy Joe Shriver, cited for his work in the Airline District for exemplary service that goes well beyond the call of duty.
Shriver is a graduate of MacArthur High School, having played football there. He has been a deputy sheriff since 1991, a life long goal.
Since Jan. 2006 when he was assigned to the Airline District, he has accomplished the following:
-117 felony arrests
-280 misdemeanor arrests
-1083 citations
-251 charges filed
-4,669 calls for service
-$30,000 in drug money seized.
These statistics average 2.75 tickets or arrests per day, and 8 calls for service per day.
In particular, he was honored for answering a call while on patrol, and saving a woman who was a victim of a horrendous stabbing and assault. With quick action he arrested the perpetrator and helped save the life of the woman.
The awards ceremony luncheon was attended by several hundred business persons, Chamber members, and public safety officers.
Sponsors of the event included Caldwell Companies, Greenspoint Community Partners, Greenspoint District, Greenspoint Mall, Hawes Hill Calderon LLP, Houston Airport Systems, Hydril LLC, Nitsch & Son Utility & Bellmar Civic Club, North Houston Bank, North Harris College, Primeway federal Credit Union, and Wyndham Greenspoint Hotel.

END_OF_DOCUMENT_TOKEN_TO_BE_REPLACED 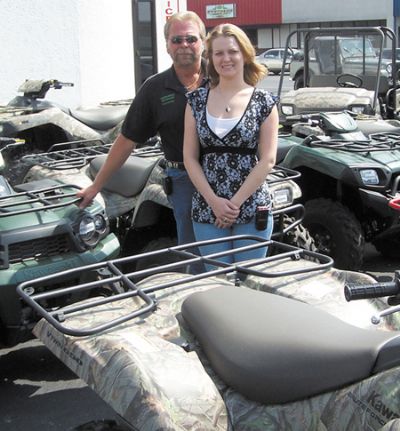 By LEWIS SPEARMAN
HUMBLE – One of the largest volume dealers in North America for the worlds fastest factory motorsports products is expanding to Humble; bringing value, low prices, innovative engineering acquired through years of racing experience and first class service.
The Coble family already has the number one volume dealer in North America selling Kawasaki, Snapper and Massey Ferguson products at Highlands Tractor Kawasaki, located on Main Street at Wallisville Road in Highlands. That location is known through out the state, Arkansas, Oklahoma and Louisiana. The success of that store (founded by R.C. Coble) is partially due to being able to purchase your product at excellent terms and prices, getting it serviced correctly the first time and being able to buy a trailer to haul it away on at the same location.

The new location, off the frontage road a quarter mile before FM 1960 from Highway 59 North, 19322 US 59 North, was designed for visibility, accessibility, convenience, enjoyment of customers and the people working there. Elements that made the original store a success are brought to a thriving crossroads.
What motivates a successful storeowner to take the risk and expense of opening a new location?
Humble is a great community, bottom line – it is growing for a better tomorrow and we were excited to become a part of it. Humble and northeast Houston deserve their own Kawasaki dealership., said Mrs. Casey Coble the newest addition to the Coble family and the best looking in general opinion.
Keith Coble, who started as a mechanic at his fathers original location responds, Well, Highlands is my roots but Ive always wanted to have a stand alone motorsports dealership on the freeway. Knowing about the northeast Houston communitys focus on improvement, I just couldnt help myself. Besides having been a Kawasaki dealer for fifteen years, I have never seen as much demand as I have now. They decide a couple of years ago to compete against themselves for better and better products.
The challenges of opening a new location in what was a 12, 000 square foot store and converting it into a model showroom for motorcycles, jet skis, all terrain vehicles, and the Kawasaki developed, Mules were extensive. Casey Coble implemented the technological, business organization and paper structure – adding aesthetics as needed to the now attractive interior. The couple decided to hold their personal lives behind the development of the new store, it means sacrificing days off and working incredible hours per week. Keith coordinated the establishment of air-conditioned showroom, service and mechanics department, a fully stocked parts department, extending the lighting and re-surfacing the storefront. Years of experience in getting the product ready for the customer lent improvements in the ergonomics of getting the product quickly into service so the product can be in the customers hands faster.
Kawasaki boasts dirt bike of the year, superbike of the year, the new trans utility vehicle, the uniquely powerful 250 horsepower jet ski according to market comparison publications. Everyone in the store (including 2003 Street Bike Drag Racing National Champion, Jeff Peck,) will tell you that research and development is the keystone of the Kawasaki brand, developing two new motorcycle models each year.
Casey explains, Kawasaki is dominating the product market right now. That is the prime motivator for us to come out here and put it all on the line. They are throwing superbike of the year in the trashcan and replacing it. What did they get with that? Superbike of the year – again, and that isnt yet good enough so they go back to the drawing board to make it even better. Its a philosophy for market domination.
The new store has a complete line of new Kawasaki Motorsports products available and parts in stock. Generally, the best inventory available would be at a new location.
Weve got a line of motorcycles we can get out for $3500 to $3600 up to real nice cruiser bikes for $7300 to $7400 with drag bars, custom wheels that come right from the manufacturer that way. I have the 2053 c.c. Vulcan, the biggest, baddest cruiser there is loaded – saddlebags, windshield running boards and chrome everywhere for about $14,500 where everybody expects to pay $18,000 for similar models. Im putting out the quality, dependability and speed that Kawasaki is known for throughout the world. says Keith.
Hunters can find all terrain and Mules built for their needs here. Keith Coble has several Boone and Crocket racks on record and has designed vehicles from hunting weekend after weekend in the field to maximize their potential in rugged terrain.
My Trans 4 is the ultimate hunting machine in my opinion, I would like to invite Houston area hunters to come out and see it for themselves, Keith adds. I use mine for everything, why would you go out and bang up a $50,000 diesel truck when you can get everything you need done in a machine designed to take it and is quiet. I dont care how tough the pulling gets even on sharp rocks; it is a vehicle we use all year long. We do landscaping we work horses. It is versatile.
Keith is partners with Highlands Motorcross Park so his customers can have a challenging track on which to practice and race and has raced since he was 17 years old. He follows the professional motorcross circuit and can detail the engineering developments to produce the KX 250.
He adds, It isnt just speed that will get you across the finish line it takes reliability and dependability. The reason Mr. Stuart dominated the motorcross track this season goes back to the research and development done by Kawasaki. They have the engineers that not only do motorsports, the also make heavy equipment. I am sponsoring six dragracers now including Gilbert Coronado, we had a X 14 here that sold the second day we put in on display. Every spec on that bike was learned at the racetrack.