An Underground Movement via MySpace

By AISHA FARHOUD
“Rock hasn’t died, it’s just moved underground”
That’s what someone said to me when I told him rock was dead. At the time I thought it was just a nicer way of saying it was dead, but I’m beginning to realize that the underground movement in music is growing stronger by the minute with the help of the Internet.
Popular networking websites such as MySpace and Facebook aren’t just for teenagers looking to message their friends anymore, these sites are becoming powerful tools for musical groups. Musicians can create a profile and upload full-length songs off of their latest album, list upcoming tour dates and locations, post photos and articles, and, perhaps more importantly, include a link to a page where fans can purchase their album on mp3. Fans can add their favorite performers to their friends list, further increasing Internet exposure.
In essence, the music industry is changing completely thanks to these websites. 10 years ago we wondered what tiny media we would be purchasing for our music, as the bulky record had transformed into the cassette tape and then the nearly paper-thin CD. But with the advent of the mp3, tangible music media began to vanish. Even MTV has let music fans down, evolving from a kooky 24-hour music video channel into a commercialized empire that airs programs such as “The Hills” and “Pimp My Ride” over music videos in what looks like a ratio of 20:1.
A few nights ago I went to a concert of a band named I Am X (with Chris Corner of the Sneaker Pimps, a trip-hop group that had decent radio exposure in the mid-90s). I stumbled upon their MySpace page and noticed that under “Label” they listed “Unsigned”. Yet the turnout at the concert was fairly good, and they seem to have a pretty strong fan following, with some people travelling all over the state to see them perform. This means that even without label support bands are able to sell digital copies of their albums and organize concert performances; websites such as MySpace and Facebook help them do just that. The music industry has definitely taken notice. Universal Music even threatened to sue MySpace over “copyright infringement” in 2006, which arguably shows that they felt endangered by the website’s increasing prominence.
It appears as though television is following a similar path with the help of websites such as YouTube. In fact, I know several people who no longer own a television and instead watch their favorite TV shows online. Although YouTube frequently deletes copyrighted videos uploaded by users, this does not stop them from reappearing later, nor does it stop similar websites from offering copyrighted material (in a similar fashion to what happened after the music-sharing network Napster was shut down in 2001). We may even see independent television shows and movies appearing on websites such as YouTube in the near future.
The revolution will indeed not be televised, but rather broadcast over the internet for the whole world to see.

Aisha Farhoud is the Youth Editor of the Northeast News. She can be reached by email at aishafarhoud, yahoo

SANTA is scheduled to arrive this Saturday, Nov. 17 at the Greenspoint Mall. He will arrive by helicopter, at 3:30 pm. Christmas Activities will take place in the Food Court from 1:30 to 4 p.m. including a Fashion Show and Radio Disney Live.

It happens to the best of us…

Death, sometimes it is unwarranted, unwanted and uncalled for, but it happens to the best of us.
As someone who reads obituary columns daily in three newspapers, I find more and more people I know or remember from back when in the papers now a days.
Read in the Baytown paper a couple weeks back that Bill Kurtz had passed. Having known him for a good while, not close friends you might say but wed speak when we ran into each other. He was a friendly fellow and not the kind of fellow Id go down another aisle at the Wal-Mart to avoid. As his obit read, one of the good guys.
Another obituary notice bought back old memories this morning when I read about Jim Adams passing away. Jim was the president of Highlands State Bank and hired me to come aboard back in 1981. Then I was slim and trim @ 170 pounds and in my prime @ 35 years old.
Boy howdy does time change things, eh?

An old finance company man, Jim had worked with Dial Finance. From there Jim went on to McGregor Park National Bank and crossed the river to Highlands State Bank.
Employees would come to work early each morning and have coffee in the break room as sections of the Houston Post were passed around.
Came to work one morning and poured a Styrofoam cup of coffee as I sat down and took a quick sip. I spewed the coffee back into the cup as Jim had dumped a salt shaker of salt in the pot.
I sort of paid him back for that prank when the bank had a covered dish dinner for something or somebody. Anyway, I took chicken livers and wrapped them with bacon, browning until the bacon was crisp; then poured BBQ sauce over all the pieces.
Jim looked at my dish and took a couple pieces not knowing what it was. Needless to say he hated liver. I watched as he put one in his mouth and began to chew; he stopped chewing and said, Thats liver!
He got up and went to the trash can and spat out the liver and bacon.
Jim was a good guy too. He helped me in my career and introduced me to many things and I do appreciate him for doing that.
Jim enjoyed Rotary and finally got me involved with it as well.
We were going to the valley once to go bird hunting with our sons. Jim said not to hunt next to two particular fellows. Said you will not get any birds as the two guys were expert shots and shot with very expensive .410 double barrel shotguns. I watched them shoot for a bit, they didnt miss. Sure would like to have one of them high dollar shotguns too.
I dont think 67 is old, do you? 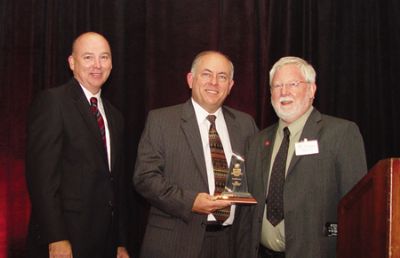 The evening was emceed by Bennie Lambert, VP of Student Development at North Harris College. Also speaking was Chancellor Dr. Richard Carpenter, who took the occasion to announce the new name for NHMCCD, which is Lone Star College District.
The Small Business Development Center is under the direction of Sal Mira, who spoke about the logistics of the awards and the banquet, and thanked those who helped.
This included the title sponsor, Capital One, and other sponsors including Amegy Bank, UHY Advisors, Harry Bucalo, CenterPoint Energy, Greater Conroe Economic DC, Greespoint District, Joiner Partnership, Kingwood College, Newtek Business Services, Schubot Law Firm, Schulte Building Systems, Sterling Bank, and Resource Protection Mgmt.
Music for the evening was presented by the Ace Jazz Orchestra.
Mira explained that the process to choose the finalists had started with nominations for 180 firms, which had been narrowed to 15 businesses.
These included Boullion Graphics, Perry Pools & Spas, Schubot Law Firm, Frost Construction Company, Lets Mechanical, The Filter Man Ltd., Biogime International, Daniel Office Products, Homewatch CareGivers, Magoos PrintShop, NorthEast News, Vest Rea & Associates, Chaparral Management Company, Schulte Building Systems, and SERVPRO of Spring/Tomball.
These firms had been judged by a committee of the SMDC advisory council, and judged on several submissions and letters of recommendation.
Each of the 15 finalists participated in a video interview that was presented during the evenings ceremony. They had one minute to talk about their company and the reasons for its success, and the importance of the award to their business.
Also, after the awards were announced in each category, the winner was given an opportunity to address the audience with additional thoughts.
Other speakers during the evening included Jerry Lowry of the Greenspoint district, Paul Davidson regional president of Capital One, and Ray Laughter, Vice Chancellor of the NHMCCD.
The 15 finalists also had booths set up in the prefunction area to display details about their businesses.