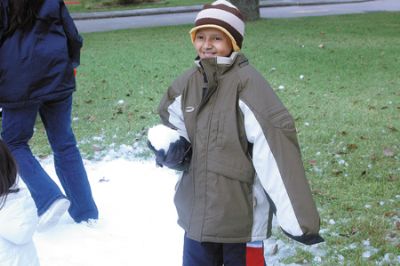 NORTHEAST HOUSTON Angel Martinez is a brave and happy young boy, a student at Orange Grove Elementary on E. Mt. Houston in the Aldine ISD.
But Angel has had a serious health problem since he was one year old, bone cancer. He lost an arm to the disease when he was only three.
Yet he faces life with a smile and bravery that lifts all around him: his family, classmates, teacher Norma Leza, and principal Betty Morrow.
And Angel had a dream, to see some snow and to take a trip to Disney World. His wishes were made known to Channel 13s Marvins Angels, and Lori Reingold and Melanie Lawson from the station came to talk with Angel, and film his story, which was presented on Channel 13s news. They enlisted the help of some of their Angels, including the McIngvale family from Gallery Furniture, and Paul Carpenter of Ice Express.
So last month, the school had 2 inches of snow, made by Carpenter with 5000 pounds of ice and a snow machine. Linda and Laura McIngvale were also on hand for the event, and Angels classmates and he got to make snow angels by lying in the snow and waving their limbs.
Then a limousine took Angel and his family, including a favorite aunt that flew in from Chicago, to the airport and a fantasy week at Disney World Florida.