Dozens of parents and community members lined Homestead on Saturday, Nov. 10 to catch a glimpse of pride as North Forest ISD celebrated Pride Week 2007 with a myriad of events. The week was highlighted by the district parade, which included school and community participants.
NFISD Interim Superintendent of Schools William Jones said he was excited by the showing. Pride Week served as proof of the support the people of North Forest have for this community and this district, he said. Each of the districts campuses participated in the event with dancers, cheerleaders, drum corps, majorettes, campus kings and queens and much more. A Battle of the Bands was also held on Nov. 10, featuring NFISD bands.
During the week leading up to the parade and Battle of the Bands, there were other Pride events, including essay and poster contests for students, a Student Exchange Day and pep rallies to celebrate the week. One of the livelier campus activities took place at Thurgood Marshall Elementary School, where the Lions held a Pride Week pep rally, featuring the schools cheerleading squad. At Fonwood Elementary, cheerleaders, dancers and the drum corp staged a parade in the school hallways for their classmates during Pride Week.
Students at the elementary and middle schools took part in Student Exchange Day during the week, with some playing host to students visiting from other campuses. A committee led by NFISDs Fine Arts Instructional Coordinator Toni Dunn organized Pride Week Events.
The Pride Bowl between M.B. Smiley and Forest Brook High Schools also drew a crowd, with Smileys Golden Eagles besting their sister school and advancing to 21-4A playoff action. An overall record of 8-2 and district record of 6-1 earned the Eagles the co-championship title for their division.

END_OF_DOCUMENT_TOKEN_TO_BE_REPLACED 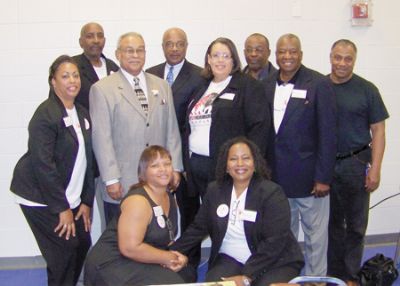 By Gilbert Hoffman, Publisher
NORTH FOREST Rod Paige, former U.S. Secretary of Education, was the featured speaker at last Saturdays meeting of the North East Education First organization, at Shadydale school auditorium.
Paige brought a message of hope to the group, recalling his own modest beginnings in southern Mississippi, and how a good education and good behavioral upbringing in his home instilled the qualities that eventually brought him to his education post at the White House.
His meaning to North Forest was that they could aspire and succeed also. But the problem is not the students, he said, but the adults. The school system must want a superior educational experience, and know how to achieve it.
To that end, Paige represents a national educational consulting firm, Chartwell, that he co-founded. It specializes in system-wide, district turnaround and restructuring to achieve an effective learning environment.
The meeting was moderated by Robin German Curtis, and opening remarks were made by Jackie Mayhorn, Albert Coleman, and Paula Settles. Also present was Sharon Jacobson, a Houston education consultant working with NEEF.
Notably absent from the meeting were any members of the school board. However, interim superintendent William Jones was present.
In closing remarks, Curtis challenged the community. She said the group wants a quality education, and to keep North Forest ISD independent. No consolidation, no busing. But as Paige asked, How bad do you want it? North Forest, you have a lot of work ahead of you.

END_OF_DOCUMENT_TOKEN_TO_BE_REPLACED 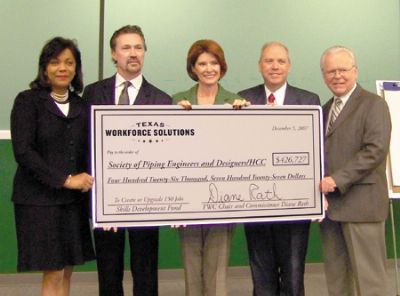 AUSTIN  The Gulf Coast area workforce will benefit from a $426,727 job-training grant from the Skills Development Fund that the Texas Workforce Commission (TWC) administers. The Society of Piping Engineers and Designers has partnered with Houston Community College to provide the training.
The grant will be used to create 60 new jobs and upgrade the skills of 90 piping designers and drafters, among others. Upon completion of training, workers will receive an average hourly wage of $22.07.
Through this job-training grant, jobs will be created and workers will receive the training they need to become more successful in the workplace, state Rep. Gary Elkins said. I applaud the hard work put forth by Houston Community College, TWC and this piping engineers and designers consortium.
The partnership of private enterprise and public education has been a powerful force in economic development in Texas, said TWC Chair and Commissioner Diane Rath. This Skills Development Fund grant continues those efforts, and we are all indebted to the Governor and the Legislature for their continued support of customized training that benefits both employers and workers.
In Fiscal Year (FY) 2007, Skills Development Fund grants created or upgraded 20,831 jobs, which paid an average hourly wage of $19.04. These grants assisted 281 Texas employers with their customized training needs. The Legislature has appropriated $50 million to the Skills Development Fund for the 2008-09 biennium.
Employers seeking more information about the Skills Development Fund may visit the TWC Web site at http://www.twc.state.tx.us/svcs/funds/sdfintro.html.

END_OF_DOCUMENT_TOKEN_TO_BE_REPLACED 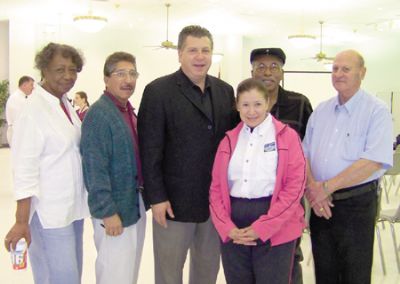 NORTHEAST HOUSTON Tasfield residents, public officials, area residents, and others held a breakfast ceremony last Saturday morning at the Northeast Community Center on Bentley. The occasion was to mark the completion of the wastewater project in the nearby Tasfield neighborhood.
This pilot project started in construction in 2006, but the actual planning can be traced back to the beginnings of the East Aldine Management District in 2001, when state representative Kevin Bailey had legislation passed to create the management district, with one of the goals to provide water and sewer to residential areas in Aldine that were not connected to any central system.
This is a pilot project, and there are currently several others, including North Houston Heights, Parkwood Estates, and Inwood Estates. The next project to start construction will be North Houston Heights, when the engineering work is completed and bid are requested. This is scheduled for 2008.

Speakers included public officials representing entities that had helped finance the project. These included County Commissioner Pct. 2 Sylvia Garcia, U.S. Representative Gene Green, and Texas State Representative Kevin Bailey. Also present were board members from the East Aldine Management District, who actually spearheaded the work on this and the other pilot projects.
Two themes were common to the speakers remarks: that this project was a cooperative effort in funding and execution by several public bodies; and that the pilot projects are designed to set an example that can be followed in many other areas of the county, to solve the wastewater and fresh water problems in many neighborhoods.
In Tasfield, it was a unique partnership that brought household sewage treatment to a forgotten Houston neighborhood, according to Garcia. She pointed out that 92 homes in Tasfield were never annexed by the city, and the result is aging septic systems, and sometimes unsanitary living conditions.
It took the collective resolve of the three elected officials Garcia, Green, and Bailey and the East Aldine Management District, to find a solution to this problem.
They found a solution to funding the project in a way that Harris County would not have to enter the wastewater business. Additionally, an agreement with the City of Houston has been worked out, allowing for the new system to be tied into their present facilities.
Using Harris Countys Office of Community and Economic Development as the funding mechanism, the three officials found a way to work within state statutes so that the County could construct the much needed wastewater system using federal grant funds.
The result is a $1.4 million project providing pipes and a lift station to 92 homes which will become a part of the City of Houstons wastewater treatment system.
Streets involved are Nuggent, Three Sisters, and Vivian. Funding sources include: Community Developement Block Grant through HCCEDD, $1,147.743; East Aldine Management District, $171,461; and HCPID/Engineering $99,700.