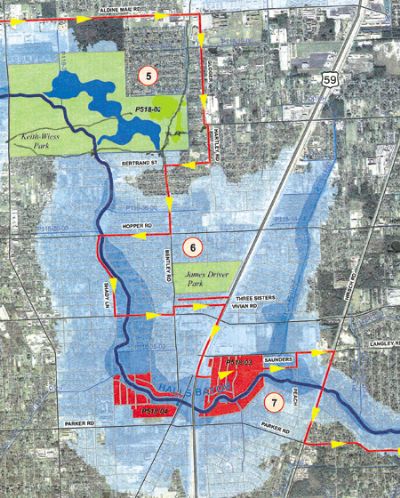 By Gilbert Hoffman
Officials of the East Aldine Improvement District, and some representative residents of the community, were treated to a tour of the almost completed improvements in Keith-Wiess Park, and along Halls Bayou last month.
Completing the tour, with officials from the Harris County Flood Control District, were East Aldine Improvement District Chairman Clyde Bailey, and Director of Services Mike Ledbetter.
They reported back that many improvements in the park are nearing completion, and that the public will have access to these new areas and amenities sometime in the Spring of 2008 when they are completed.
Bailey said that 5 new 5 acre lakes are done, and besides their flood control function, they will be available for fishing from a pier. The pier, walkways and a pedestrian bridge are now under construction. The lakes will hold about 300,000 gallons of water in a flood situation, and lower Halls Bayou about a foot.
The tour took a route on city streets around Halls Bayou, noting much flood control work under way. A major holding basin has been cleared along Sauders, east of US59.
The map on page 1 shows possible road improvements, including the extension of Bentley to JFK through the park, and the east-west connection of Gulf Bank Road to East Mt. Houston. These roads are in various stages of planning and financing, and not all of them are set to be built at this time.

However, new parking areas and access roads inside the park will be opened this year, as shown on the map.
Keith-Wiess park is owned by the city of Houston, having been donated by Margaret Wiess Elkins and her family in 1979. It is a total of 500 acres, one of the larger parks in the city.
Improvements are being financed by Harris County, the City of Houston, and the East Aldine Improvement District. The HC Flood Control District will spend $10,000,000 to reduce the risk of flooding along the Halls Bayou waterway, and the Texas Parks and Wildlife Department has given a grant of $2,000,000 for the park amenities.
These will include a one mile concrete paved hike and bike trail, a 2 mile soft surface nature walking trail, a footbridge over Halls Bayou, 3 new soccer fields, a fishing pier, and a boardwalk and further development of the wetlands environment.
These will be added to existing facilities, which include 2 lighted tennis courts, a practice basketball court, a multi-use field for football, soccer and rugby, 5 picnic areas and 2 picnic shelters, a playground for children, and some existing walking trails.
The total area of Keith-Wiess Park is 500 acres, and the new work is involved with about 112 acres of this land. 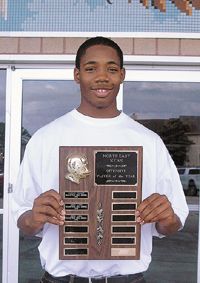 The Eisenhower Eagles had a big question mark heading into the season, namely how well would junior quarterback Kenneth Guiton perform. The Eagles coaching staff figured they had enough talent on that side of the ball to make some noise in the District 19-5A race, but they knew they would need a strong season from Guiton to make the offense click. Well, Guiton turned out to be the perfect fit as he led the way to the 19-5A title and a bi-district playoff victory over Westside.
Guiton completed 146 of 281 passes good for 2,522 yards and 17 touchdowns. He also added 254 yards on the ground and 10 touchdowns and led the Eagles to an 8-4 record (7-0 in league play).
That effort earned Kenneth Guiton the Northeast News Offensive Player of the Year honors and the good thing for the Eagles is he has another year to get even better.
He had a tremendous season, said interim head coach Ray Evans. Hes one of the best kids Ive ever been around. Hes a leader on and off the field. Hes not very vocal, but he leads with his actions.
Evans said Guiton and his receiving corps formed a strong bond during the summer of 2007 when they participated in 7-on-7 competition against other teams from across the Houston area. He said that was an important component to the success the Eagles enjoyed on offense this season.
It (the success of the offense) started with Kenny and his receivers taking part in 7-on-7. They formed a bond during the summer and it carried over into the season. They learned to trust one another. Once we saw Kenny throw the ball in practice, we knew we had something special.

The 6-4, 185-pound Guiton caught the eye of quarterbacks coach Marlon Taplin early on in pre-season drills. Taplin knew his squad had a cool and talented customer under center and that gave him hope for the season.
Kenny is very coachable and mannerable, Taplin said. I dont think Ill coach another quarterback like him. Hes a born leader. He motivates others around him and hes accountable. When he makes a mistake, he owns it. Hes got a great arm, hes mobile with decent speed. Hes not Vince Young, but hes pretty darn good. He also has good vision and a good knowledge of the game.
The Eagles lost their three non-district games to some formidable opponents (Humble, North Shore and Lufkin, all three of whom made the playoffs), but Evans said they entered league play confident they could be a factor, and he was right. They went undefeated, upsetting pre-season favorite Stratford and start quarterback Andrew Luck to earn the 19-5A title.
Evans said the Lufkin game was a turning point in the season for Guiton and the team.
Lufkin jumped out on us early, but we came back and made a game of it. Kenney was very fired up in that game. That had a carryover effect for the rest of the season.
Taplin is excited about Guitons future and he knows the young signal caller will work hard to improve his game heading into the 2008 season.
I know he wants to get better and hell put in the work to get there, Taplin said. Hes a very humble young man and he wont let last years success go to his head. I tell him stats in the paper dont mean anything. Its your results on the field that matter.
Guiton should receive a lot of attention from college recruiters. Hes received letters of interest from Virginia, Oklahoma, Cal and Oregon.
The neat thing is Kenney will be the first quarterback at Eisenhower who is recruited as a quarterback, Taplin said. Im blessed to have another year to work with him. Im really looking forward to that.