By BOBBY HORN JR.
Layoffs and loss of some services are expected as North Forest ISD begins looking at ways of making up a $7.3 million budget shortfall.
During a special called meeting of board of trustees on Jan. 19, the district said that they will not be getting as much money from the state as previously expected so they would have to make up the lost revenue by reducing their M&O or maintenance and operations budget.
According to Interim Superintendent William Jones the Texas Education Agency (TEA) is withholding $7.3 million in state funds, saying that it overpaid the district for the 2006-2007. School districts receive funds from the state based on student enrollment. The state says that the school district over-reported its enrollment. Williams admitted that no one at the district had updated the enrollment figures that went to the state. Sources indicate that over the past five years the district had seen an over 3,000-student drop in enrollment.
In most districts when an emergency comes up such as a natural disaster or expected loss of state funds they can turn to their fund balance, which is a type of rainy day fund. This is not an option for North Forest. Williams said that overspending and inaccurate budgeting has left the district with a $5.1 million deficit in its fund balance.
In order to make up for the lost state funds Williams said that each department would have to come up with at least an 11% cut in their budget. How this will affect the approximately 1,400 district employees is yet to be determined. However, it is believed that cutting back services and non-employee related expenses would not be enough to make up the $7.3 million.

This month students returned to Forest Brook High School after attending classes at Smiley the first semester while repairs were made at their campus. One suggestion offered by Williams is that consolidating the students into one high school would cut costs. He also favored keeping the students of Hilliard and Tidwell Elementaries combined. The Tidwell campus was closed in October when mold was discovered in the school.
Financial troubles are nothing new to North Forest.
Last year the TEA began an investigation into FEMA funds sent to the district for school repairs. In 2001 $10 million was sent to the district to pay damages caused by Tropical Storm Allison. Later another $13 million was sent to the district. When the district was asked to document how the funds were spent it could not produce adequate records.
During this time the district also used school bonds that were supposed to go for new construction to make the repairs based on the promise that 75% of the money would be reimbursed if documented. The documentation did not come.
In March 2007 the TEA appointed a conservator to the district to oversee its finances. The same month the school board fire Superintendent Dr. James Simpson. The missing documentation occurred before Simpson came to the district.
Simpsons firing led to a wrongful termination lawsuit being filed against the district. Last week the board voted to rehire Simpson as superintendent.
The district also had unexpected building expenses with the mold remediation at Tidwell and then $1 million in repairs and renovation at Forest Brook High School following last summers vandalism. 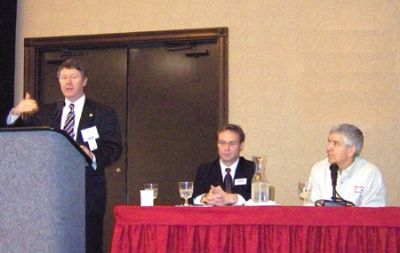 NORTH HOUSTON Five speakers at the NHG Chambers Annual Economic Forum looked for the bright side of the economy in their areas of expertise, but the keynote speaker, Mark Dotzour, thought we are on the verge of a recession, and that the government and business ought to admit it as part of the remedy for getting out.
Although he admitted that economists are often 50% wrong in their predictions, nevertheless he reviewed various factors in our nationwide economic picture that are in trouble, including credit markets, housing, commercial real estate, and commodity prices.
However, in contrast to the nation, he saw Houston and Dallas maintaining a bright spot in their local economies, especially in real estate.

Although he predicted that 2008 will be a difficult year, he saw things improving in 2009, and after 2010 he thinks the economy is set for a very good future. Lower federal interest rates will continue, and the adjustable rate mortgages will expire, helping that market. Even oil prices should fall, he said, perhaps to the real cost of $60 a barrel.
His suggestions for current investments to protect your capital in a falling market include gold, high quality commercial real estate, land, foreign currency, and 10 year treasury bills.
He noted that Oil prices, such as $100 per barrel currently, are cyclical, and will adjust downward. Currently these prices are benefitting Texas towns with economies based on oil.
Other speakers included Gallery Furnitures Jim McIngvale, who welcomed participants and spoke on the retail economy. Although he saw 2007 as one of his slowest years, he suggested that chaos always should be looked at as an opportunity for innovation and improvement. He also announced that Gallery will furnish 132 USO offices throughout the world without cost, as a donation to servicemen and women.
Judge Ed Emmett spoke on transportation matters, and how they affect the economy. Historically and currently, he felt that Houston was a transportation hub, with great promise for the future if we continue to develop a coordinated system that includes rail, highways, toll roads, and port facilities. He said that Houston has the potential to become the Global Port for the whole United States.
Fred Caldwell spoke on the strong commercial real estate market in Houston and the Greenspoint area. He indicated that nationally, the Texas area is considered desirable by corportaions that are relocating, due to a pro business climate, and a high quality of lifestyle.
Sue Payne, of ExxonMobil, spoke about energy need in the future, and how oil companies are developing plans to meet the needs, beyond current methods. 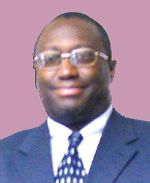 By Gilbert Hoffman
North Forest ISD trustees, after months of searching for a new superintendent to replace the one they fired last March, came up with a surprising answer last Wednesday night  they chose the fired school head, James Simpson as the lone finalist by a 4-3 vote. This spread, similar to the vote that fired Simson, is an indication of the inherent strife present between the board members. Yet the vote in one way indicates the desire of the board for reconcilliation, and a new course for the district.
After a state mandated 21 day waiting period, and another vote, Dr. Simpson will be able to return to his office and continue the work of fixing the problems with this troubled school district.
Simpson was one of three finalists considered by the board, as a result of search work done by TASB. The others were not named, but the board indicated that the presentation for Simpson had been very positive.
North Forest is now operating under the guidance of two state TEA conservators, one for financial matters and one for academic problems.

During the meeting, controversy continued, as T. Marie McCall explained that she had changed her position, and voted for Simpson this time, because she thought this was best for the children of the disrict, and that Simpson would land on his feet with momentum for improvement.
In contrast, when Trustee Pastor Charles Taylor Sr. voted, it was a resounding Hell NO that later elicited an apology for the profanity from Trustee Williams. Taylor said in his remarks that he thought Simpson had the worst record of any of the candidates, and should answer for previous NF problems, including the finances and the control of the administration.
Several board members indicated that they had voted for Simpson with the hopes that the boards involvement in affairs would end, and he could run the administration without micromanagment from the board.
Provost and Ross indicated that the vote was in the best interests of the students, and looked forward to the board and administration working more as a team. Provost indicated that previous problems were not created by Simpson, but before he took over and that he had been working to correct them.
This included hiring bonuses for teachers, a new curriculum, and working with local community colleges on credit courses for high school students.

Here it is the fourth week in January and Wal-mart has tomato plants. Its the single pot variety of plants which cost more than the six packs and dont cut the mustard as far as the gardening guru from Highlands is concerned. Just dont have the luck with planting them compared to the multi-plant sets he said.
Manage to get two bundles of the onion, one Texas 1015 and Georgia Sweets AKA Vidalias from the Wal-mart this morning. Kills my back to plant them thangs but they are so good once the tops dry out.
The guru will have tomatoes in the ground next month if you can believe it. Ive seen it, fact. Tis!
Speaking of believing and there bouts:
Would you believe?
Coca-Cola was originally green?
Moons ago in Scotland the game called Gentlemen Only.. .Ladies Forbidden was invented, thus the word GOLF came about.

In the 1400s, a man couldnt beat his wife with a stick any bigger than his thumb. Then ya got, the rule of thumb. That dont work at our house, shell hit back or says, you got to go to sleep sometime.
Its impossible to lick your elbow.
The cost of raising a medium-size dog to eleven years old will run you over $16,000.00.
If a statue in the park of a person on a horse has both front feet in the air, the person died in battle. If the hoss has one front leg up, the person died because of wounds received in battle. If the horse has all four legs on the ground, they died of natural causes.
Back in poetic times, mattresses were secured on bed frames by rope; just like a sailors rack. When you pulled on the ropes, the mattresses tightened, making the bed firmer to sleep on. Hence the phrase.. .Goodnight, sleep tight.
In the ole bars when one had too many pints and quarts, the old bartender told them in a loud voice, Mind your pints and quarts and settle down. Then you get the phrase mind your Ps and Qs.
Those days are dead and gone but its the new age.
The age when you have more Pins than you can remember; not to mention passwords.
Ive tried to use my phone as the mouse many times and vise versa.
Your phone book is your cell phone.
Youve entered phone numbers on your keyboard in lieu of your phone.
Had to use another phone to call your cell phone so you could locate where you left it.
Finally leam how to text message someone.
Call someone in the house to come help tote in the groceries.
Send personal emails on company computer,
Oops, NOT!