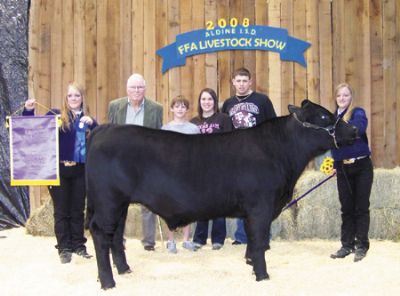 ALDINE A new auctioneer, more show entries, and vertical groups with record donated amounts of money all combined to make last Friday night an outstanding event for 58 student exhibitors, at the 49th Annual Aldine FFA Livestock Show and Sale.
Last year, the FFA Livestock Show& FCCLA Country Fair as it is named, raised a total of $112,950 for the exhibitors. This year the total came to $155,500 before any resale figures were taken into account.
Prices were considerably higher than previous years, due to the aforementioned largess. An example would be the Grand Champion Steer, raised by Ashlee Palermo of Nimitz High School. It was purchased by First Construction Group for $19,000, compared with last years price of $18,000 which was also a record.
The money raised by the students is theirs to use for college scholarships or to fund future FFA projects during the 2008-09 school year.

Franklin Higgins, director of career and technology education, and in charge of the show, said We are so pleased and proud that our students hard work was so richly rewarded. We are also so thankful and appreciative to the many members of the Aldine community, from our business partners to school district staff, who committed their resources and time in support of our students. This years show was indeed a great success.
This years auctioneer was Nick Hinze, of Missouri City, who kept the action moving and the prices high. Ag teachers who helped with the show included Aldines Bobby Josey, Michael Kocian, and Kimberly Kohler, Eisenhowers Troy Carlisle and Andrea Johnson, MacArthurs Dexter Arkadie and Sarah Fish, and Nimitzs Michael Johnson and Chris Ruscher.
Community organizations that helped with the show included Aldine Optimist Club, who held a raffle for additional scholarships, the Greenspoint Rotary Club, who sponsored banners for the grand and reserve champions, and Component Sales and Services Steve Mead, sponsoring the Sale of Champions.
The outstanding buyers included First Construction Group, W. G. Burchfield, Axa Equitable, UBS Financial, First Southwest Bank, Beasley Tire, Republic Central Realty, Kidd Pipeline, Jostens, Optimist Club, John Kohler III, North Houston Bank, JSD Auto, Fisher Meats and McCauley Lumber.
In addition, a major influence in they buying was the school groups, including the Vertical Groups from each high school, the Superintendents Group, the Buyers Group from Aldine HS, the Lasso Club, the Operations Group. The vertical groups had raised $63,000 to bid toward the exhibitors.
Other highlights of the event included a special award to Laura Reyes of Nimitz High School for her artwork, and musical presentation by the MacArthur High School Choir.
The event was held in the newly renovated and expanded M. O. Campbell Center, on Aldine Bender Road. 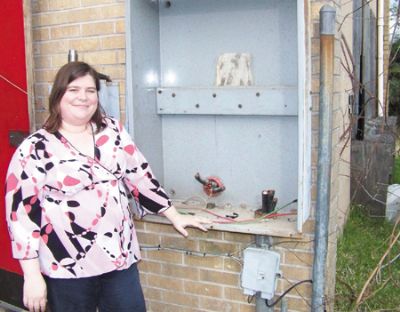 NORTHEAST HOUSTON Copper thieves stuck again last weekend in the Aldine Mail Route area, and several businesses found themselves without power.
Y.O.U.T.H. has not been able to use their main building for a week, since the wiring in their outside panel box was cut and taken in two successive thefts last Saturday and Sunday, according to director Shawna Roy.
CenterPoint Energy indicated to Roy that a continuing problem has existed in this area for many months. Other establishments that have had their copper stolen, either from electrical boxes or air conditioners, include the Sheriffs substation, MacDonalds, and St. Leos Church on Lauder Road. Authorities said that a shopping strip center beside Y.O.U.T.H. also had their wiring stolen at the same time last weekend. In an email to her board and friends, Y.O.U.T.H. Exec. Dir. Sylvia Boling said I propose that we do something as a community to make everyone more aware of the number of incidences in our area.
In the meantime, Y.O.U.T.H. continues to serve its clients and students by crowding into the two buildings still powered.

NORTH FOREST In a move that may suggest future action, Texas Education Agencys financial conservator Henry Boening, exercised his power and cancelled a called board meeting that the NFISD had scheduled for last Friday evening.
The meeting had one item on its agenda: a final vote on a new superintendent for the district, Dr. James Simpson.
The embattled district has been struggling with deficits and low performing schools, and had hoped to move forward through its problems after choosing a new superintendent.
However, the choice of a superintendent was complicated by two issues: one, the preliminary choice had favored the prior fired head, Simpson, on a 4-3 vote; and second, the board president Tobie Ross, Jr. had subsequently indicated he would not support Simpson in a final vote.
This chaotic background, as well as calls for dissolution of the districts board by the public and the Houston Chronicle, come in the wake of a statement by TEA that they are preparing a plan for corrective action according to TEA spokesperson Debbie Ratcliffe. She indicated that new action would take several more weeks to formulate and announce.
Meanwhile, the district has announced a regular board meeting for Monday, Feb. 18, but the agenda is only for normal business matters.