By GILBERT HOFFMAN & BOBBY HORN, JR.
NORTHEAST HARRIS COUNTY Although most media in the area are concentrating on the presidential race, voters in the state Legislative District 140 have one of the more interesting races before them.
Incumbent Kevin Bailey, who has held the office since 1990, has faced his most formidable challenge in recent years, by newcomer Armando Walle.
Bailey has gained wide recognition in the area for his active advocacy in local issues of safety, environment, water and sewer, and governance. He is credited with introducing the legislation that created the successful improvement districts in the area, namely Greenspoint, Aldine, and Airline. These three taxing bodies have made a considerable difference in the quality of life for local residents in the unincorporated areas of the county. Bailey has used his position in the legislature to advance other issues of importance to local voters. These include the CHIP program, or Childrens Health Insurance, where he successfully voted to add 130,000 additional children to the program; flood control issues; control of junkyards and auto salvage businesses; and education issues, including voting for a teachers pay raise.
When he was chairman of the Investigative committee, and later of the Urban Affairs committee, he was involved in hearings that resulted in legislation to certify crime labs statewide, and to close labs such as those in Houston that had a record for problems in their DNA and other samples. He is now pushing for a regional crime lab system to replace local labs, which would be certified as to accuracy, and avoid the problems of trials that have been nullified due to faulty lab analyses.

Baileys terms in office have not been without controversy, however. The most recent, and the one that has caused some in his party to oppose his re-election, came in the last legislative session when he voted to support Republican Tom Craddicks bid to remain Speaker of the House. Bailey made this vote, he said, in the best interests of his district in Houston.
However, the crossing of party lines, and Craddicks subsequent financial support for Baileys re-election, alienated some local democrats, and the result was a concerted effort to replace him with a new candidate, Armando Walle.
Walle is a local Aldine native, who went to MacArthur high school, where he is remembered for playing football. After graduating, he went to the University of Houston. Later he worked for several politicians, including Rodney Ellis, Carol Mims Galloway, and for six years as a staff member for Congressman Gene Green.
Walle is keenly interested in public service and local issues. He serves on the board of the YMCA, Hardy Street TIRZ, Harris County Hospital District-Aldine advisory board, and was elected Chair of the Harris County Tejano Democrats.
Walle says he feels the main issues are a better public education, improved Childrens Health Care for more children (CHIP), flood prevention, and improved public safety, with an emphasis on eliminating gangs.
Walle is endorsed by many local democrats, including Gene Green, Rodney Ellis, Adrian Garcia, and Carol Galloway. He recently received the endorsement of the Houston Chronicle.
Polls are open across Texas March 4 as voters cast their ballots for their Democratic and Republican nominations in races ranging from Harris County to the White House.
Polls will be open from 7 a.m. to 7 p.m. and may need to stay open longer if crowds are present at closing.
Since each party will hold their own primary, not all voters will use the same polling locations. Polling locations can be found on the Harris County Clerks election website www.harris votes.com.
Under state election law, voters may only cast ballots in either the Republican or Democratic Primary, but not both primaries.
The winners in Tuesdays races will be listed on the November 4 General Election ballot by party.
Third Party groups such as the Libertarian and Green Parties will not participate in Tuesday elections, but will rather hold their own convention later in the year.
While the national attention will be focused on Texas and its impact on the presidential race, there are several local races that have been heating up as of late.
One race that will directly impact Eastern Harris County is Precinct 3 Constable. Ken Jones, the incumbent, faces two challengers in the Democratic Primary. They are Randy Rush and Bill Norwood. The winner draws Republican Tony Lewis in the fall.
Constable Jack Abercia, a democrat, is seeking relection to Precinct 1. He is being challenged within the party by Art Aguilar and Jack Boatner. Nat Gutierrez is unopposed on the republican side.
There are six candidates vying for sheriff. Incumbent Tommy Thomas faces Paul Day and Michael Plagens in the GOP Primary while on the other side Adrian Garcia, Charles Massey El and Guy Robert Clark are seeking the democratic nod.
District Attorney Chuck Rosenthals personal problems, and decision not to seek another term has opened up a horse race on the Republican side. Seeking the nomination are Jim Leitner, Kelly Siegler, Doug Perry and Pat Lykos. Former Houston police chief C.O. Brad Bradford is the lone democratic candidate.
In the race for Harris County judge, which is the senior administrative official, the incumbent is republican Ed Emmett, and his party challenger is Charles Bacarisse. The winner will face either Ahmad Hassan or David Mincberg on the democratic ticket.

END_OF_DOCUMENT_TOKEN_TO_BE_REPLACED 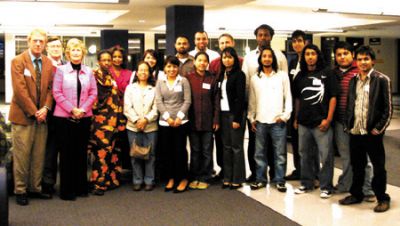 HOUSTON– For more than 20 years, the Rotary Club of Houston Greenspoint has hosted a dinner honoring International students attending Lone Star College-North Harris as a sign of friendship and goodwill.
We wanted to make sure that we (as Rotarians) welcome international students who came to the United States seeking an education and a future, says Elvin Franklin, long time Greenspoint Rotarian and owner of Elvin Franklins Insurance Agency representing State Farm Insurance. We also encourage the students- who represent a wide-range of countries-to embrace each other as they seek their higher educational objectives and personal goals.
The mission of Rotary International is service-in the community, in the workplace, and throughout the world. Since 1910, The Rotary Motto has been Service Above Self.
This years International Student dinner was located in the colleges student center with key note speaker Nithyanantha Sevanthinathan, director of International Programs and Services for the Lone Star College System.
Sevanthinathan spoke to the students about developing personal and professional networks (such as the Rotarian Clubs), cited personal examples of his own experiences, and encouraged the students to realize they can achieve their dreams.
Currently, Lone Star College-North Harris has an enrollment of 280 international students-representing more than 65 countries. We are thrilled to have such a global community of students on campus each semester, says C.C. Sutphen, LSC-North Harris manager of media relations. The different cultures, views and experience truly add to the wonderful tapestry of our student body.

END_OF_DOCUMENT_TOKEN_TO_BE_REPLACED 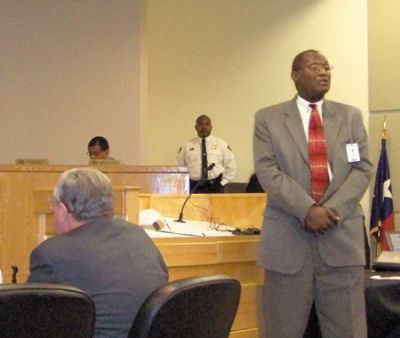 NORTH FOREST Faced with a large deficit and pressure from the state of Texas TEA, the School District board of directors listened to a presentation of alternatives to regain the districts financial and academic standing, from Interim Superintendent William Jones at last Fridays board meeting.
Jones presented a detailed plan with 5 phases, which included various scenarios of personnel cuts and school consolidations. He recommended to the board that they accept Plans 1 and 3. Plan 1 called for immediate cuts in school personnel, and Plan 3 called for combining the High Schools and elementary schools Hilliard and Tidwell, with additional major reductions in staffing in the school year 2008-2009.
The board voted 4-1 to implement Plan 2, but after a lot of discussion, they did not act on any other plans. Plan 2 was similar to Plan 1, but called for additional personnel cuts in the central administration department, which Trustee Williams said repeatedly during the evening made more sense than cutting a lot of lower paying jobs. It is expected that a total of about 45 staff will be terminated in this school year, starting almost immediately, Jones said. Plans 1 and 2 also called for selling district assets, such as the Langley elementery building, 130 acres of vacant land, and some temporary classroom buildings. Also included were department budget cuts of 20% across the board, and postponement of completion of work at Kirby middle school. Jones projected an annualized savings of about $7, 708,000 for Plan 2.

The total deficit that the district is trying to recover is about $17 million, so additional cuts will have to be made, he said. This will include combining the high schools, two elementary schools, and perhaps combining the middle schools.
The board agreed with Jones that the district had too many school buildings for the student population, and too large a staff.
The board indicated they were not prepared to make any additional cuts at this time, but would consider them at the next meeting, scheduled for March 10. At that time, consolidation of some of the schools will be the major topic, it is assumed.
The evening started with a public meeting, to hear comments from the community. About 5 persons came forward to comment, with a variety of praise and complaints.
A highlight of the evening was a report from administrators Dr. Sharp and Dr. Lewis, who said the new plan to combine the high schools would result in retaining the better teachers, retraining all the staff, implementing new technologies including distance learning, new and more AP and pre-AP courses, and a new magnet school.
Jones made a power point presentation, noting that NF student population has been losing 500 students a year, and he anticipates a drop from the current 8300 to about 7700 by 2010.
TEA representative Ron Rowell spoke, praising the board for action on Plan 2, but noting that further action must be taken soon to meet contractural deadlines for staff reductions.
Plan 2 was moved and approved, with YES votes from trustees McCall, Taylor, Provost, and Ross, and NO from Williams. Trustees Gaston and Lemons were not present.