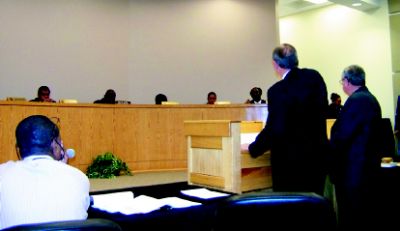 By Gilbert Hoffman
NORTH FOREST The North Forest board, in a special called meeting last Saturday, voted in a short meeting to eliminate one high school and one elementary in an effort to get the finances of the district under control. The move recognizes the fact that the student population has declined greatly in recent years, helping to create the financial burden that the district is trying to resolve.
Previously, in a dramatic meeting last Monday March 10th, the North Forest ISD school board had voted 4-3 to rehire Dr. James Simpson as the Superintendent of the district. Immediately following that vote, state TEA representatives spoke to nullify the action. The boards vote came in spite of warnings from Texas Education Agency representative Ron Rowell that the vote was overridden by the authority of the state, and had no legal status.
Members of the board all evening had hurled criticism at the TEA and its representatives, Henry Boening and Ron Rowell, who are present in North Forest as overseers for the state TEA.

The vote was seen as a defiance of the states intervention in the district, which faces financial and academic problems that it might not be able to solve on its own. Rowell cautioned that the district had been placed on an Academic Accreditation PENDING status, which could lead to more serious sanctions and even dissolution. After tempers flared, the sides cooled and agreed to have their attorneys meet to discuss the legal standing of the vote.
However, TEAs Rowell closed the meeting with the notice that Simpson was not the new superintendent.
At Saturdays meeting, the parties were more cordial and cooperative. However, only 5 of the board were present. Trustees Williams and Provost were absent for the discussion and vote.
Two motions were presented, namely to combine high schools into one, and to combine Tidwell and Hilliard elementaries into one. In each case the five members present voted unanimously in favor of the recommendations that had been presented at the last two meetings by interim superintendent William Jones.
After the meeting, TEA representative Ron Rowell expressed his approval of the action. This is a step in the right direction, although much work is still to be done.
This was a reference to the fact that the board did not vote on any reduction of the staff at this meeting. Although Jones had presented plans for cutting up to 200 staff members in the school consolidation plans, the board preferred not to act on this item until the next meeting, which is now scheduled for Tuesday night, March 25.
In a surprise move that differed from Mondays plans, superintendent Jones said that he now felt that the combined high school should be housed in the present Smiley High School campus, because it has more facilities and more land. However, he acknowledged that some repair work is needed to get that building ready for use, and in the mean time he feels that Forest Brook could be occupied on a temporary basis.
Assistant Superintendent Paul Johnson told the Northeast News that a rough estimate to refurbish Smiley was about $6 million, and that the construction funds from the previous bond issue had about $13 million available, so this work was feasible economically. However, this money was previously designated for Kirby middle school renovations, so more decisions are obviously due.
Trustee Albert Lemons spoke about the pressing need for one good high school, to symbolize the progress of the district, and he also suggested that one good middle school would suffice. He suggested that this might end up being housed in the Forest Brook building.
Trustees McCall and Lemons called for a new name for the high school, with input from the public and students, and to serve as a symbol of a new beginning for North Forest.
Asst. Superintendent Carl Williams indicated the he and TEAs Henry Boening had determined that the district could probably recover another $2.8 million from FEMA, helping to ease the deficit that the district faces, which currently stands at about $17.2 million. A total of $9 million would then be due from FEMA, when all the paperwork is finished, Boening indicated, narrowing the deficit that the district must make up by the start of classes in August.

By BOBBY HORN JR.
Citing a need for new instructional facilities and infrastructure upgrades, the Lone Star College System will ask its patrons to approve $420 million in bonds.
The election will be held May 10.
The lions share of the bond package will be $262.4 million for instructional facilities. Another $44.2 million has been set aside for student service facilities. Among these are performing arts facilities and a second University Center.
According to demographers the college system will grow to 80,000 students by 2015.

College officials said that one area of interest is health sciences. The field, they say, suffers from a lack of trained healthcare and emergency services workers.
Industry watchers say that it is more common for those entering these field to study at a community college than a university. To meet this need Lone Star College will, if voters so authorize, build a new health professions building at North Harris College and a science and health building on the Montgomery campus.
During formation of the bond referendum, input from the community suggested that the college system set traffic and safety as a priority issue. The proposed package has $38.3 million going to these areas.
The system also plans to add $25.9 million in technology infrastructure.
Trustees said that they originally planned to ask for $461.7 million. However by cutting out $41.7 million they can avoid a tax rate increase.
This is the college systems second attempt in the last two years to gain approval for bonds. In 2006 voters turned down a $200 million package forcing the college to assess their needs and the communitys desires.
The May 10 election will also feature four positions on the systems board of trustees. Fourteen candidates have filed for a spot on the ballot. Early voting is from April 28 to May 6.