By ARLENE NICHOLS Special to the NE News
Residents in area neighborhoods receiving water and /or sewer service from Texas American Water have received notice that the company will be raising rates for water and sewer service. The current increase comes shortly after residents received a refund on the last rate increase by the company. The new rates will go into effect on an interim basis subject to approval by the Texas Commission on Environmental Quality (TCEQ).
Last year area residents served by Texas American Water, led by State Representative Kevin Bailey and community leader Irene Garcia, formed Aldine Ratepayers Association to challenge a rate increase by the company. After two day-long hearings, the group reached a negotiated settlement with the company that resulted in a reduction in rates and a refund to the customers. Notice of the most recent rate increase was received the same week that customers received the refunds on their water bills.
We are determined to fight this outrageous increase. I am working with area residents to file a protest of this latest increase in rates that has been filed with the TCEQ, said Bailey.  We have already collected more than 300 signatures on petitions but will need an additional 100 signatures of residents who are customers of Texas American Water.
Bailey went on to explain that he has requested assistance from the
East Aldine Improvement District so the residents will have legal support when the contested rate case goes to hearing. The hearing process is required by law if more than 10% of the utilitys customers request a hearing. Since Texas American Water has expanded the number of customers by merging two companies, Southwest Utilities and Walker Water
Works, the number of signatures required to successfully require a contested rate hear has increased significantly. Residents of the
Greenwood Village and Colonial Hills neighborhoods have been going door to door with petitions to reach the threshold required to force the hearing. If you have any questions regarding the upcoming meeting or about the contested case hearing, please contact Baileys office at 281-847-9000.

END_OF_DOCUMENT_TOKEN_TO_BE_REPLACED 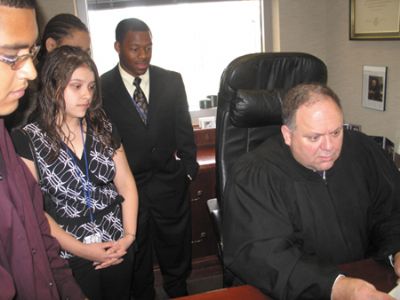 Aldine High School Law & Public Service Academy attended an educational experience on Thursday March 27, at the Harris County Criminal Justice Center County Criminal Court at Law #6 with Judge Larry Standley presiding.
The Honorable Judge Larry Standley is a graduate of Aldine High School class of 1975. While in the court room the students observed the court room process, such as plea agreements, plea bargains, seeing defendants being placed on community supervision (adult probation), and jail sentencing.
Judge Standley and the chief prosecutor interacted with the students about the courtroom process. The deputies and judge allowed the students to tour the entire courtroom such as the hold over cells where non-bond defendants are held in the courtroom and the judges chambers. The students walked away with a better understanding about the criminal justice and courtroom process.

END_OF_DOCUMENT_TOKEN_TO_BE_REPLACED

Exercising, the body and the phone…

Decided to join the gym while the Mrs. was in Pennsylvania and after eight trips to the gym, I cannot tell any difference. Except it makes me realize that I have muscles in places I did not know I had places. Only go every other morning and give it a good twenty minutes.
In between working out on the exercise machines, I watch the weight lifters who are toward the back of the building and in front of the mirrors. Guess if I looked like some of them, I would want to look at myself too.
Sure hopes this turns out better than the Charles Atlas course I took back when someone kicked sand on me. They never did send me my muscles.
One would think doing yard work and gardening would be enough to keep a person in shape. If you have ever had a stress test, that is what twenty minutes in the gym does to me. Makes one breathe deep and a heap.
Thankfully, Shipleys Doughnuts is just up the street.
Finally, the end of the month and the end of the quarter rolls around. Back in my finance company days, it was like a race at the end of each month to get the past dues down or lowered.

We made car loans, trailer house loans and personal loans. My job was a CSR and that is a Customer Service Representative also called an Adjuster. Always called it a collector myself because that is what I was always doing.
On any given day, I was assigned up to and sometimes over twenty accounts to go see. Problem was the first call was over 60 miles away down in tobacco country.
Addresses were Routes, for instance, Route 4, Box 478. The hardest part was to find the route and then follow it along to the number – that seemed to go on for miles and miles.
Saw many cases with people down on their luck.
Had one friend who worked back then with G-MAC, down in South Georgia. She did the same thing I did and that was continuous Dialing for Dollars and outside field calls.
Per her recollections, this one account was a disabled vet and his parents were poor poor poor. Said it took every thing he received in disability payments to keep them afloat and he was way past due on his car loan. So far, it was at the point of repossessing or collecting the bucks.
Anyway, she said she left and went home and cried her eyes out over the conditions those people were living in. Even went so far and made a payment for him with her own funds.
Sometimes life is not fair and sometimes a true guardian angel comes along.