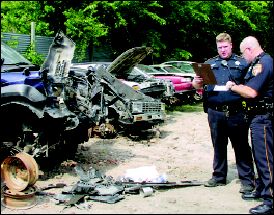 A pilot project has begun to enforce existing state laws regulating junkyards. The purpose of the project is to gather sufficient data and information to determine the need for increased scrutiny of the businesses. A team of law enforcement officers, environmental investigators and a flood-plain management inspector have been visiting junkyards along Aldine Mail Route and Airline Drive.
Unregulated junkyards are causing visual blight, depressing opportunities for economic redevelopment and potentially polluting the environment. The environmental impact of these unregulated businesses illegally disposing of petroleum products has been a major concern, said Rep. Kevin Bailey. When junkyards that are polluting our waterways are locating within a few feet of homes with backyard water wells that are 25 -50 feet deep, the need for stricter enforcement is obvious. State law requires that junkyards be set back 300 feet from homes, schools or churches.
Program to last 3 months

The pilot project will last for about three months before the team reports to a committee that will make recommendations on enforcement to Commissioners Court. Team members are armed with a checklist covering all of the items that are regulated by existing laws. Junkyard operators are being provided a copy of violations along with a date for a reinspection of the business. In some cases, tickets are being issued immediately. The data collected will enable the county to establish long-term strategies to reduce contamination caused by the junkyards.
Multiple violations found
During their initial inspections in North Houston, the enforcement team has found violations of every law that is listed on their check-sheets. The areas violated most frequently include requirements for outer fencing; setbacks from streets, homes and churches; display of work outside the fence and improper documentation of records for car being salvaged. Pollution control laws are also being violated including those regulating municipal solid wastes, water quality and storm water drainage.
County given enforcement
Legislation authored by Bailey during the last legislative session provides the county with greater authority in regulating junkyards. Formerly state law granted the county the authority to regulate automotive salvage yards and junkyards in its unincorporated areas, but the permit fee of $25 was insufficient to defray the cost of regulation and Harris County did not have the resources to exclusively devote to regulating them. The new law by Bailey increases the annual fee to $500 in order to provide sufficient funding for a dedicated workforce to police these businesses.
The East Aldine Management District and the Airline Improvement District have abatement deputies who are working with the inspectors on the pilot project. The pilot project will focus on junkyards located within the districts boundaries. 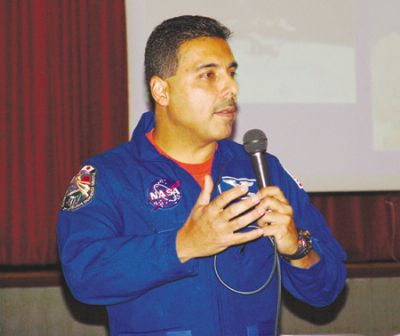 By BOBBY HORN JR.
They have seen them on television and they have seen them portrayed in movies, but last week students at Hambrick Middle School got meet a real astronaut in person.
On April 28 NASA astronaut Jose Herndandez and Congressman Gene Green visited the Aldine ISD school.
Hernandez spokes to the students in an assembly about the benefits of science, technology and math education. He also spoke about his experiences at NASA.
Henrandez became an astronaut in 2001. He is assigned to the Astronaut Office Shuttle Branch, where he supports shuttle launch and landing preparations at the Kennedy Space Center in Florida.
Hernandez continues to serve as role model, especially in the Hispanic community. He is a recipients of the Society of Mexican American Engineers and Scientists Medalla de Oro for professional and community contributions and the Hispanic Engineer National Achievement Award Outstanding Technical Contributions as well as being a Graduate Engineering Minority Fellow and Eta Kappa Nu Electrical Engineering Honor Society Member.

The month of May marks the fourteenth year Two Cents Worth and Thoughts of an Old Country Boy has been in publication. From all this typing, hope you have: learned something, brought back an old memory or had a laugh. What do you want for two cents?
The month of May gives me spring fever with the itch to go somewhere and get out of Dodge if you have ever had the hankering. With the price of petrol, guess I will do like Four Dog does and just itch it.
Aint no telling where all of this high price of gas will end much less when? One can vision brokers price hiking like they did with the electricity power brokers. Somebody is sure in high cotton with all this money going into deep pockets.
Funny thing (not really) but the government wants to bail out the big banks for their greed but us poor boys dont get bailed out from this price gouging of gas. Sounds like a case of the tail wagging the dog maybe?
I will take a piece of cheese with that whine, thank you very much.

Anyway, in what started out as an intelligent conversation with the Mrs. the other evening, the subject of retirement came up.
In carrying on what sounded like a good idea about retiring, we spoke of what all I could do since I have no real hobbies like golf or yachting or something of the sorts.
Somehow, the conversation came around to me being domesticated so I could take over the house cleaning, etc. She does not want me using her high dollar washer since I really messed up a load of laundry with a green work apron I brought back from Georgia. Wore green drawers and t-shirts for a while.
Still weaseling to get out of that part, I mentioned going to San Jacinto College couple times a week and playing golf and to the community center with the old folks.
There is possibility of volunteering at the hospital, but those old sick people make me hurt so that is out.
It is good to marry a younger woman that way she has to continue working until her retirement and give me freedom to read and write and sleep until sunup.
Somehow, painting the garage and fixing the shutters popped into the picture and this and that and the list kept growing.
Needing to get on to a different subject, I told her I could gigolo on the side.
When the laughter finally finished, I got up and started supper.