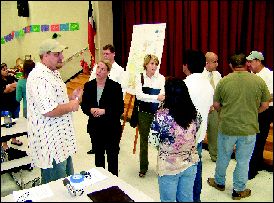 Airline District residents met last Thursday night, May 8 at Carroll Academy on Gulf Bank, to hear a presentation by Melissa Hamous, a senior planner with the Harris County Public Infrastructure Department. This was the third and final meeting in a process that has developed a plan for new water and sewer services in the Airline District area. As explained by Hamous, this plan is necessary before funding for engineering and construction of a system can take place. She said that the plan is a 30 year study, but emphasized that the search for funds is a current, ongoing process that has already resulted in construction of new water and sewer lines in two areas of East Aldine, as an example of what can be accomplished.
Hamous said that she could forsee the design work for an area taking 3 to 4 years, and construction and completion in about 4 to 5 years, for any area that would be designated as the first pilot project area, as in East Aldine.
As part of the presentation, Hamous emphasized that many wells are contaminated, and homeowners should test their well water for purity. To aid in this, she passed out bottles and instructions on how to get the test done. More information is available from the Harris County Health Department at 713-439-6260.
The audience numbered about 150, mostly homeowners in the district. Although the discussion was mostly about the water and sewer plans, other topics brought up for discussion included junk yards, annexation, sidewalks, subsidence and Metro rail plans for the North Corridor. Most of these were deferred, since the meeting was primarily about infrastructure planning.

In the detailed presentation, Hamous pointed out that an arrangement had been made with the City of Houston, to take over all water and sewer lines that are constructed, and to provide services to the homes at the current city rate. This is expected to be about $50 per month as projected today. She emphasized that no MUD district would be created, and homeowners would become customers of the City of Houston water department.
As an added incentive, the hook-up costs of switching from well and septic systems to city systems would be absorbed by the Airline District, with no additional expense to the homeowners.
Most of the audience acknowledged that their systems had a limited life, perhaps only 25 years for a septic system, Hamous said. Even with correct maintenance, they eventually age to the point of needing replaced. One audience member said she had priced this replacement cost at $9000 for her homes septic system.
Hamous said that the switch to a new system would be voluntary, but with Airline District paying for the disconnect/connect, which is valued at many thousands of dollars, it only made sense to change to a new system.
Some objections were heard from the audience, because the county will require that old systems be entirely abandoned. Some homeowners wanted to continue to use their wells for yard and garden watering, but Hamous explained that this could not be allowed, if a new city system was on the property, because cross contamination is possible and the city could not risk this. The only cost to the homeowner for a connection would be the water department deposit for new customers, now $100, refundable after a year.
However, this new infrastructure would only be available to single family houses at this rate, she said. Apartments, mobile home parks, and businesses would not be able to connect without paying normal fees to the city for a commercial hook-up. She said that the state TCEQ has a small business division that might be willing to cover costs for some of these types of installations.
Hamous said that preliminary information from the study indicated the extent of the problem, as follows:
 Septic overflow has occured in 477 reported cases, or citations, since 1991.
 Half of the properties in the study have private sewers, and just under half have private water wells.
 About 1 of every 8, or 12% of the septic systems, are failing and this rate will increase with time.
In the public discussion, it was noted that septic systems do not function well in the soil that Harris County has. There is too much clay for good absorption to occur.
The Airline Improvement District (AID) is receiving a grant from the Texas Water Development Board (TWDB) for a Water and Wastewater Planning Study to determine the economic feasibility of alternatives to replace failing septic systems and provide a potable water supply to the Districts residents and business. The state grant is for $125,000.
For more information and updates on studies and meetings, Teri Koerth suggested checking with the district website at www.airlinedistrict.org, and notices in the Northeast News.

Aldine ISD was named the winner of H-E-Bs Excellence in Education Award. The announcement was made on Sunday, May 4, at an awards celebration held at The Woodlands Conference and Convention Center.
By being named the winner in the large school district category, Aldine ISD was awarded $100,000 from H-E-B.
This is a tremendous honor and we are so thankful to H-E-B for the generous contribution they have made to our district, said Aldine ISD Superintendent Dr. Wanda Bamberg. This award will be shared by our entire team, from our board members, to our administrators, teachers, support staff, parents and especially our students. This award validates the hard work of Aldine staff to produce the Nations Best! This has been an incredible experience for us. All school districts in Texas work really hard for their students, and we want to do right for our students as well.

Aldine ISD competed in the large school district category with Aransas County ISD (Rockport), Kerrville ISD, McAllen ISD and Round Rock ISD. Aldine and the four other finalists were chosen for their commitment to Texas children and their communities. The H-E-B Excellence in Education Awards is the states largest monetary recognition program for Texas educators.
The Excellence in Education Award highlights the great things going on in Texas public schools, to spotlight best practices and to celebrate the work of Texas educators.
Officials from H-E-B conducted a site visit on March 11. During the visit, H-E-B officials, along with members of the Aldine community, received an overview of the district by Dr. Bamberg. Additionally, the group visited four Aldine ISD campuses. The purpose of the visit was to determine the systemic capacity of the district to deliver high quality education in terms of its organization, processes and curriculum.
Created in 2002, the H-E-B Excellence in Education Awards are designed to honor outstanding public school systems and professionals and to thank them for their dedication and commitment. Through this program, H-E-B seeks to pay tribute to educators, administrators and districts who go the extra mile each and every day to serve their students and their communities and who inspire others to do the same. 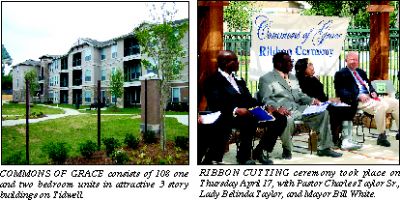 By Gilbert Hoffman
NORTH FOREST A ribbon cutting on Thursday morning, April 17 marked the opening of a new Senior Housing project at 9110 Tidwell that brings attractive new housing units to the North Forest community, and promises to serve as a catalyst for continued improvements in the area, according to the sponsors.
Attending the ceremony were representatives from the city, and the Grace Cathedral Community Development Corporation, who sponsored the project and since 2000 have worked to bring it to realization. Participants included Houston Mayor Bill White, Pastor Charles H. Taylor, Sr. of Grace Cathedral Church, and Executive Director of GCCDC Lady Belinda E. Taylor. Master of Ceremonies was Mr. Willie R. Taylor, CDC president. Others that were present included State Representative Senfronia Thompson, Senator Mario Gallegos, and City Controller Annise Parker. City Council Members that sent representatives included Jarvis Johnson, Sue Lovell, and Peter Brown. Also attending were Board members from CDC and their advisory board, and church members from Grace Cathedral. A total of over 100 persons attended the event.

The project was conceived in 2000, and took advantage of a state program for tax credits that helped with the financing and the rental levels. The Homes Funds grant in the amount of $700,000 was received in 2005 from the City of Houston, allowing the project to move forward. Groundbreaking took place in February, 2007. Construction development proceeded with the help of NRP Group LLC, a national specialist in senior housing, with offices in San Antonio and Cleveland, Ohio.
Residents of the project must be at least 55 years old. There are two types of apartment homes. The one bedroom unit has 750 square feet, and the two bedroom, two bath unit has 987 square feet. Each type of unit includes an outdoor balcony/patio, a laundry space in the unit, and a desk/work area as well as a kitchen, dining room, and bedrooms with walk-in style closets.
Residents also have use of the clubhouse, which has meeting rooms, fireplace, swimming pool, fitness center, computer center, picnic area with barbecue grills, and more.
The site is on a METRO busline, and has a gated entrance for security. Pets will be welcome at the project, according to the management. For senior living, there will be planned activities and social events.
In addition to Senior Housting, the GC CDC has received grants to fund Summer Youth Programs for children in the area.
The housing was built on land that Grace Cathedral Church originally purchased in 1997, according to Pastor Charles Taylor, Sr., Founder of the GC CDC and Senior Pastor of the church.