Art on the Move 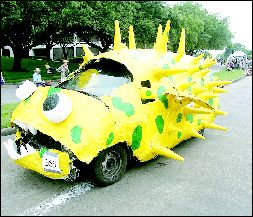 On May 10, the Art Car Parade travelled through Memorial Park, and ended up at the new Discovery Green for an afternoon of fun, food and frolic for all of Houston.
What began in 1988 with 40 decorated vehicles and a handful of onlookers is now the Worlds Largest and Oldest Art Car Parade. The event features over 250 Art Cars, 200,000 plus live spectators and media from all over the world.
Scores of lowrider, classic cars, costumed roller skaters, musicians on floats, art bicyclists, hot rodders, and hard-to-classify rolling contraptions join in and shine in the spotlight.

END_OF_DOCUMENT_TOKEN_TO_BE_REPLACED

A $420 million bond referendum to build new facilities and infrastructure for fast-growing Lone Star College System sailed to victory Saturday night by a 62-38% margin.
At the same time, Pos. 3 incumbent Stephanie Marquard and Pos. 9 incumbent Priscilla Kelly were re-elected to new six-year terms on the colleges board of trustees. Pos. 6 incumbent Alan Quintero, appointed to complete an unexpired term, was defeated by challenger Bob Wolfe. Robert J. Adam was elected to fill the Pos. 4 seat vacated by trustee John Fox, who did not seek re-election.
Final unofficial tallies showed the bond proposal passing in every segment of the community college district with 13,574 votes for to 8,232 against. The district is comprised by 11 independent school districts: Aldine, Conroe, CyFair, Humble, Kingwood, Klein, New Caney, Splendora, Spring, Tomball, and Willis. The proposition drew 21,806 voters.

We are extremely pleased with the outcome of this election, said LSCS Chancellor Dr. Richard Carpenter. We got our message out, and residents responded.
We are greatly appreciative of the confidence voters have placed in us, Dr. Carpenter said. We will move aggressively to fulfill the promises we have made to the community, and look forward to meeting the needs of the students we serve.
Lone Star College System enrolled 49,263 students in credit courses last fall, and is adding about 5,000 new students every 24 months. At the current rate of growth, the system anticipates more than 72,000 students by 2015. College officials have said that the systems five college are at or beyond total capacity as defined by the Texas Higher Education Coordinating Board.
Trustees elected
According to final but unofficial tallies in the trustee election, Pos. 3 incumbent Marquard received 5,165 votes to 3,798 for Fred Blanton, 3,485 for Jerry Albrecht, and 1,897 for Robert Gandy.
In Position 4, Adam defeated Terry Morton, 6,716 to 6,368.
Wolfe was victorious in Pos. 6 with 4,942 votes, Jason Roper with 4,642, and Quintero with 3,834.
In Position 9, incumbent Priscilla Kelly won with 3,839 votes, followed by Joe Williams with 2,806, Diane Porter with 2,742, Gail Stanart with 2,264, and Jean Iverson with 1,901.
Trustees are elected by a plurality of votes cast; there is no run-off election.

END_OF_DOCUMENT_TOKEN_TO_BE_REPLACED

Been in the briar patch picking blackberries, got two large freezer bags full from two pickings. The Mrs. suggested blackberry jam out of the pickings but my thoughts are on another batch of wine.
Picked a few tomatoes out of the garden of weedin and some of the onions are ready already. Nothing better than a toasted BLT samich with homegrown tomatoes.
Dug up a few red potatoes but what little mess there is would not sustain a family over winter.
The bucket with two tomato plants growing out the bottom finally has a tomato on one of the vines. A far cry from the photos I have seen loaded with nice size tomatoes.
Sure did hate to hear of Eddy Arnold passing on, he was 89.
My mother truly enjoyed the music of Eddy Arnold on the old tube radio in our kitchen back in Georgia. Still have that old tube radio from back 50 years ago; Eddy Arnold, Hank Williams, and Ernie Ford were all popular back then. My mother would listen to the radio during the day when she was in the kitchen cooking biscuits or whatever; some of those old songs she could play along with a biscuit pan and right good at it.
Received news this past week of an old family friend who also passed away, at 93. Beulah Louise Irvin from Morristown, Tennessee.

She lived her life in my hometown of LaGrange, Georgia and her husband was a mechanic. He was also a racecar driver of ole number 1084. AJ were his initials but he was known as Jute. 1084 was the Lodge number of the BPOE.
Louise worked at the Cake Box off on one of the main streets in town back when I was a bicycle riding fool. After the picture show, I would go by the Cake Box and get a Coke in the bottle and a brownie. They had the best brownies you would ever want to eat.
The time on these events was when gas was in the price of cents if you savvy.
I would give Louise a case quarter and never paying any attention to the change, I would put it in my pocket and proceed to gnaw into those brownies and wash it down with a Coke and then a large belch of which I could do some CATTLE CALL.
Once I noticed the change and she said do not worry about it and I did not.
Being all this on a Saturday and the Cake Box closed on Sundays as did every other place in town they also closed on Wednesday afternoons back then too.
Louise would give me whole cakes, which they would have to throw out or give to some of the help. Fortunately, for me, I have bicycled over a mile and a half, up hills enough to wear one out to get a German Chocolate cake to the house with one hand, thanks to Louise.
R I P Beulah and Eddy, two Tennessee folks.