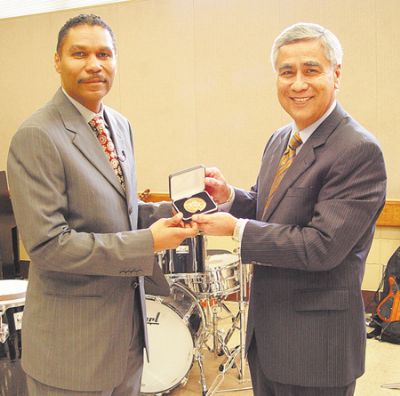 For the last 23 years, Jose Diaz has shared his love and knowledge of music with the students of MacArthur Senior High School.  His devotion to his students, and the MacArthur community, was richly rewarded when he was named the recipient of the Jefferson Award, presented by Channel 2.
Channel 2 news anchor Bill Balleza presented Diaz with the award in May when he visited the Aldine ISD school to interview Diaz for a segment that ran on June 5 on the NBC affiliate.
The award is presented to individuals in the Houston area for their achievements and the contributions they make in the community.
Diaz, who was nominated for the award by MacArthur parent Susan Robles, said winning the award was humbling.

This award lets me know that the time I spend volunteering and working to help others is appreciated by people in our community. That means a lot to me, he said.
Diazs boss, MacArthur High principal Nancy Blackwell, said Channel 2 could not have picked a more deserving person than Diaz to receive the honor.
Mr. Diaz has impacted the campus of MacArthur and the members of the community in countless ways, she said. He has what I call, stickability. He sticks with the school and the kids and motivates them in every way possible. It is fitting that the parents chose to nominate him for this award.
In addition to teaching music and directing MacArthur Highs band and award-winning Jazz Ensemble, Diaz also runs the Diaz Music Institute, which was founded in 1999. The highlight of the yearlong Institute is the Summer Music Workshop, which is held in June.
Diaz said the Institute inspires young musicians to hone their skills and make them realize the talent they possess.
The most celebrated aspect of the Institute is the Summer Music Workshop. This conservatory style program has a very aggressive curriculum to develop students to a high performance level, he said.
Music has played an important role in Diazs life ever since he was a young man growing up in Chicago. It was music that helped to shape his life and allow him to focus on the future.
Music has helped me develop the self-esteem and courage I needed to survive in our world, he said. Developing my music skills has helped me to become more disciplined, motivated and competitive. Performing with a group has taught me the social skills I need to get along with others and to work for a common goal.
And for the last 23 years, the students of MacArthur High School have had the good fortune to benefit from Diazs vast knowledge and caring style as a teacher and mentor.
I think its important for everyone to know that what we do does not go unnoticed, Diaz said. It is also imperative for our students to know that charity work is essential and it is part of what we do as citizens in this country.
Indeed.

END_OF_DOCUMENT_TOKEN_TO_BE_REPLACED

Several days ago I received a local historical society Newsletter. History is important to any town, city, county, state, etc. but unfortunately there are not enough of them around in most communities to really get all the information down in a timely manner and pass it on to the next generation, etc. But, people who put for the effort do a good job.
The editor has some items in this latest issue that may now be among sought after facts in history but they brought smiles to my face and I thought you might be interested as well.
Facts from the 1500s in EuropeMost people got married in June because they took their yearly bath in May, and still smelled pretty good by June. However, they were starting to smell, so, brides carried a bouquet of flowers to hide their body odor. Hence, the custom today of carrying a bouquet when getting married.
Baths consisted of a big tub filled with hot water. The man of the house had the privilege of the nice clean water, then all the other sons and men, then the women and finally the children. Last of all, the babies. By then the water was so dirty you could actually lose someone in it. Hence the saying, Dont throw the baby out with the bath water!

Houses had thatched roofsthick strawpiled high, with no wood underneath. It was the only place for animals to get warm, so all the cats and other small animals (mice, bugs) lived in the roof. When it rained it became slippery and sometimes animals would slip and fall off the roof. Hence the saying, Its raining cats and dogs.
There was nothing to stop things from falling into the house. This posed a real problem in the bedroom where bugs and other droppings could mess up your nice clean bed. Hence, a bed with big posts and a sheet hung over the top afforded some protection. Thats how canopy beds came into existence.
The floor was dirt. Only the wealthy had something other than dirt. Hence the saying, Dirt poor.
In those days, they cooked in the kitchen with a big kettle that always hung over the fire. Every day they lit the fire and added things to the pot. They ate mostly vegetables and did not get much meat. They would eat the stew for dinner, leaving leftovers in the pot to get cold overnight and then start over the next day. Sometimes stew had food in it that had been there for quite a while. Hence the rhyme, Peas porridge hot, peas porridge cold, peas porridge in the pot nine days old.
After reading the above I was glad I didnt live in Europe during the 1500s. Can you imagine one bath a year!! Such was life then I guess.
Such are the people, places and things that have touched my life in my West Virginia home!

END_OF_DOCUMENT_TOKEN_TO_BE_REPLACED 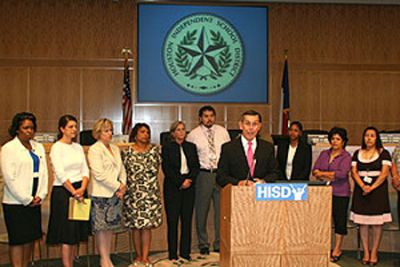 The Texas Commissioner of Education has ordered HISDs Sam Houston High School closed because it failed to make enough academic progress, but Superintendent of Schools Abelardo Saavedra said he is working with the commissioners office and the Board of Education on ideas to repurpose the school with exciting new programs for students beginning in August.
Although Sam Houston High has made academic progress, the progress in math was not enough this year to earn a rating of Academically Acceptable from the state. Dr. Saavedra and board members met Wednesday with Commissioner Robert Scott, who said the school must close because this is the sixth straight year it has been rated Unacceptable.

This is not the end of the story, though, Dr. Saavedra said. We will work with parents to develop a plan to take to the school board and then to the commissioner to repurpose Sam Houston High School and to start exciting new programs with many new teachers beginning in August. We will continue serving the community that has been proud of the progress at Sam Houston.
Dr. Saavedra said the school district will first meet with parents of incoming ninth-graders and with parents of current Sam Houston students in a series of sessions June 10 and 11 designed to get the communitys thoughts. The superintendent wants to take a proposal for new school programs at the Sam Houston site to the school board for approval June 12 and submit it to Commissioner Scott on June 13 for review and approval.
The Texas school accountability system requires that all students and student groups (African-American, Hispanic, white, and economically disadvantaged) meet the academic standard in every subject before a school can be rated as Academically Acceptable. At Sam Houston High School, HISD officials were not able to help the school make enough progress in math.
Sam Houston has made some good progress these last few years. Were all proud of the hard work of the teachers, the students, the parents, and the community, and we are committed to many more great things in the future for that community.
The programs opening next August at the repurposed school would be entirely new. The HISD administration wants to talk with, and get thoughts from, parents about an exciting new program with an emphasis on math, science, and technology.
Commissioner Scott said up to 75 percent of the teachers at the school must be replaced. The teachers reassigned from Sam Houston High will have a chance to be hired into positions elsewhere in the district.
Dr. Saavedra said he will ask the school board to approve special bonuses for new teachers who agree to take on the assignments at the new, repurposed Sam Houston.
A new principal has already been appointed. Jane Crump, the very successful principal of Robert Louis Stevenson Middle School, was named last month to lead the Sam Houston campus next year.
We are all very proud of the hard work that has gone into improving Sam Houston, and of course were very disappointed that we were not able to get the kind of academic growth we needed. But there is extremely strong support in the community for the educational needs of the children in the area, and we are excited about working with the parents, the school board, and the commissioner to start great new academic traditions at the repurposed Sam Houston, Dr. Saavedra said.
Sam Houstons performance on the state TAKS test has improved over the past four years. This year, 81 percent of Sam Houston students passed the TAKS reading test, up seven points from last year, and 83 percent of students passed the social studies TAKS test. In fact, Sam Houstons scores in reading and social studies are so good they are at the Recognized level, the states second-highest academic grade.
Overall, Sam Houstons passing rate on both the math and science TAKS improved from 45 in 2007 to 50 percent in 2008.
Sam Houstons progress across the board is better than the state-average progress in reading, math, and social studies from 2004 to 2007 during those four years.