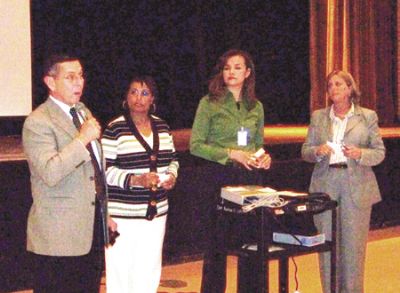 NORTHEAST HOUSTON Houston ISD board of trustees approved a plan at their regular meeting last Thursday, to repurpose the Sam Houston High School, which was closed in a dramatic move by the Texas Education Agency for failing 5 years in a row to meet state accountability standards.
Since the closing, the district has formulated a proposal that will be submitted to TEA. If they approve, then Sam Houston will change to two new schools: a 9th grade freshman school, separatge from the high school, which will become a school with emphasis on Math, Scince, and Technology.
Following TEA guidelines, the new schools will have to have 75% new teachers, 50% new students, new names, and a new principal.
At least temporarily, the schools have been named the North Region Ninth Grade Preparatory Academy, and Sam Houston Center for Math, Science, and Technology.

HISD is prepared to offer bonuses up to $5000 to new teachers that have a proven record of improving students test scores, superintendent Saavedra indicated. However, on the subject of 50% new students, he said that all passing current students would be eligible to return, although they could also opt for another school, since HISD is an open enrollment district. Saavedra indicated that TEA head Robert Scott had liberally interpreted the law to allow HISD to keep current student in the new school. This is also due to 9th grade and graduating seniors not counting in the new student body.
Saavedra and others also noted that this years Sam Houston had made considerable progress in improving student test scores, and he questioned why state accountability standards did not recognize so much improvement, instead of only using benchmarks that did not recognize this effort. He suggested that the state should reconsider their accountability program when the next legislature meets.
In a related discussion, Armando Walle, who is scheduled to be the next state legislator for the area, told the Northeast News that he would work for legislation to revise the accountability standards.
Part of the problem, as indicated by educators close to the situation, is that only a few students in one of the minority categories have not been able to meet the math standards in TAKS testing, in spite of extensive tutoring and special effort by the school. These few students have lowered the accountability results below the state standards.
PTA president Marina Mendoza indicated to the Northeast News that she has seen the proposals for the repurposed schools, and thinks they have a good chance to succeed in bringing up the quality of education and test results.
HISD has appointed Jane Crump as the new principal, replacing the current principal Aida Tello. Crump was previously at Stevenson 9th grade school, where she brought about a successful improvement.
Crump led the presentation last Tuesday night, to parents at Sam Houston auditorium. She emphasized that the new school would continue the successful programs, would offer more career paths, and would keep in daily contact with TEAs Scott to insure that the school was on the path to acceptabile performance.
She specifically assured parents that programs such as Pre-AP/AP/dual credit, special ed, off-campus programs, arts, band, and others will continue.
She indicated that the school will emphasize keeping in touch with each individual student, knowing their needs and helping them to succeed. She encouraged parents to contact the school regularly, and use email and the school website often.
Some changes that will take affect when the schools open in August will include uniforms for all grades, and the 9th grade students will be required to take an extra hour of class instruction beyond what they now do.
Crump explained that the uniforms will aid the administrators in keeping the two schools and their students separate from each other, even though they will be on the same campus.
She said that for now the 9th grade will be housed in a combination of existing buildings and portable classrooms assembled in their own area, away from the 10-12 grades.
The plan for the new 10-12 school, will allow it to have a new name, state number, and to forgive the accountability failures of the previous Sam Houston – in other words, a fresh start.
The repurposed plan will cost HISD a reported $3.6 million additional dollars, to be spent in hiring bonuses, reconfiguring the buildings, and rewiring the high school to be a wireless WiFi campus.
The new school will offer combined high school and college credits, and to emphasize this, the president of Houston Community College – Northeast, Dr. Margaret Ford, was present for the presentation.
The high school will require that students declare a career path, in engineering, information technology, or the transportation industry.

Me and the Mrs. took a little R & R last couple weeks and went on the longest vacation ever for the two of us. It was the longest we have been away from home since we eloped 39 years ago.
Took off to South Dakota to look at the stone faces of Mount Rushmore, dodging tornadoes in Nebraska on the way. Managed to get to York, Nebraska on the first day of travel. The Data for Extreme Weather team (Storm Chasers) were there with their equipment and we got some good shots of their tornado vehicle.
Stayed up in Wall, South Dakota the next night and managed to visit Wall Drug if you know what that is.
Got to see and drive the Badlands Loop as they are named properly so and ever so great to see.
Next day we drove to Mount Rushmore and saw the stone faces on the side of the mountain.
On the way back to the main drag, we came upon a park called Bear Country and the girls (The Mrs. and my old sister) said they would like to see it. Dang near choked when the young girl said forty-five dollars but it was worth it after we finished looking at all of the bears, elk, puma, badgers, wolves and otters. Saw a Magpie for the first time as well.
On through Sturgis, South Dakota and stayed over in Spearfish, South Dakota for the night on our way to Billings, Montana.

Detoured the main road and went to the Devils Tower, which the girls wanted to see too and it was nice. Drove into rain, sleet, then it started snowing about the time we got up into the clouds thick as Goose Creek fog. Mercy day, I did not like driving in that but managed to come out on the other side of the mountain into a clearing and could see.
There is an Indian tale about Devils Tower and they enjoyed the visit in the wet weather.
At the tourist center @ Devils Tower, they had all sorts of junk and what knots. On in the back of the store they had a big old cured rattlesnake in a wooden glass box. Got old sister to come back there and look at it. She shuttered and grunted when she saw it.
Asked the store clerk where they got it and she said TEXAS. That made me smile.
On to old cousins house for a few days to visit and talk about all the relatives. Her momma and my momma were twins so she and old sister were tight growing up, like Mutt and Jeff if you savvy the drift.
Bird country in that part of Montana and they like the birds as much as we do with feeders and all. More nice shots of some winged friends.
One day we stopped to have lunch (this was preplanned) in a restaurant/casino and just enjoy each others company. As we were being seated, I went one server and asked if she will be our server and she was. I told her to bring us an order of Mountain Oysters and just sit them on the table and do not say anything about it. So she did.
Old cousin told me to order them cause she was fraid the girls would get mad at her. I was used to that so I placed the order and they all dug in when the fried morsels arrived.
They were served with a red horseradish sauce and were right tasty.
Hated to leave good company but our trip was ahead of us, so on to Yellowstone National Park from the Northeast entrance though Red Lodge, Montana.
We tried going through Beartooth Pass a couple of days before but it was closed due to an avalanche. After three days, Beartooth Pass reopened and through it, we went. 10,947 feet up and a site to see. Have heard talk of the little or lack of oxygen up that high and trust me, it is a fact. Just crossing the road for a photo opportunity and coming back wore me out. Tuff on a fat boy I tell ya.
They had over a hundred inches of snow up there this year and we rode through where it had been cut out. Talk about a big wow!
Yellow Stone National Park was pretty and populated with lots of grazing buffalo and Yankees.
One can usually tell a Yankee with his Bermuda shorts on with T-shirt and black socks with sandals or tennis shoes. Tacky, Tacky!
One of our twins said, The old geezer goes to see the old geyser.
Down through the Teton Mountains and into Jackson Hole, Wyoming where all the rich folk stay, we hung a westerly direction through Idaho just to say we been to Idaho.
Headed down country, we entered Utah and Idaho a couple of times on these side roads, just a looking and looking. Talk about a neck ache.
Drove the loop through the Flaming Gorge Recreational Area and it too was neck ache country.
Antelopes galore and many other animals through out the trip. How ever, the road kill caught my attention and especially the 30 dead skunks on the trip. Eight others were smelt but not seen.
Lots of coons but the three badgers caught my attention too, as did the cougar lying on the side of the road, two pheasants, fox, numerous deer and antelope.
Crossed the 44th parallel and the Continental Divide on occasion, seeing things we will never see again but always remember hopefully!
Highest gas was $4.29 and diesel was @ $5.19.
Bunch of rocks, mountains, snow, and beautiful country but when I saw that pheasant cock stand up in a grain field in Montana that made my day.