North Forest Board says TEA wrong on Districts status, will fight to stay 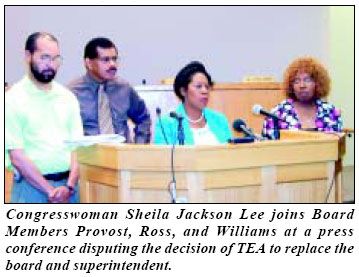 NORTH FOREST  At a press conference called last week, and then subsequently at their called board meeting, the trustees of the North Forest School Board criticized the announcement of Texas Education Commissioner Robert Scott to replace the board and the Superintendent.

They were joined in their comments by Congresswoman Sheila Jackson Lee, who said she supported the present board, and opposed the TEA decision. However, in carefully chosen words, she emphasized her job was to all the people in the district and insure that after cutting out the problem, what is left must work for the good of the whole community and its children.

Lee said her goals were Fairness, and Preservation of this Historical District. She said she wanted a stable school board, so that it could attract money and help from outside organizations.

Lee said she felt the TEA action may be a violation of the federal Voting Rights Act of 1965, and noted that the Board Members are protected by law. She called for a review by the U.S. Dept. of Justice.

Lee mentioned that she already had commitments of about $1 million, in escrow from private sources, to be used for improving math & science expertise in the district. She indicated that there could be other federal, state and private funding available in addition to this.

Lee said she viewed North Forest as potentially a good place for people to move back into. She thought an appointed Board would probably not be as responsive to the community as an elected board.

Board members read statements and made comments about the TEA decision, feeling that it was unwarranted.

President Ross said the board had worked hard, and that improvements were obvious. He cited higher TAKS scores, a balanced budget, and reduced staffing and expenditures. He indicated that he felt the announcement was a racist and biased decision by Scott against a black district.

The board indicated they will appeal to TEA to reconsider the decision.

In an emotional statement, board member Sylvia Brooks Williams said Revocation of my right to serve is a revocation of your right to vote.