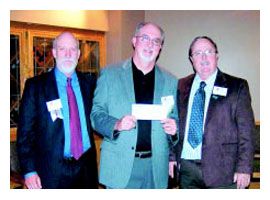 The East Aldine District has as one of the goals in their Service Plan, the furthering of education and leadership for students and residents in their District. To this end, they have been contributing each year to scholarships for Aldine ISD students, through the Aldine Scholarship Foundation.

At a reception last week, celebrating the 20th anniversary of the Foundation, representatives from the District presented ASF with a check for $30,000. This will allow two additional named scholarships to be set up in perpetuity, for use at Lone Star College. Making the presentation were David Hawes, EAMD Executive Director, and Clyde Bailey, chairman of the EAMD board. The amount of this scholarship award represents an increase over past years, from $15,000 to $30,000, according to ASF president Bill Townsend, who received the check.

Speaking at the anniversary celebration were Townsend, emcee Reggie Gray of the North Houston Greenspoint Chamber, Stan St. Pierre on the History and the Mission of the ASF, and Dr. Stephen Head, president of Lone Star College-North Harris, on the opportunities that these scholarships provide to Aldine ISD students, and new programs and facilities planned for North Harris college in the future. Dr. Head in particular spoke of a Construction Trades Program that will be started by the college as a response to needs in the community, and the opportunities it will bring to the Aldine area. He also mentioned that LSC encourages high school seniors to have a “mind-set” of going on to college, especially by waving tuition fees for dual credit classes in high school, which gives them a big step into the community college program.

St. Pierre said that since 1989, the Aldine Scholarship Foundation has awarded full tuition scholarships to more than 700 AISD graduates. The goal, he said, is to be able to provide first year tuition and fees to all AISD students that complete their high school graduation.

The Foundation establishes named and planned endowments on behalf of contributors, for the purpose of providing these scholarships. A full endowment takes $15,000, which can be funded over seven years. To date, named scholarships have been contributed by the following:

Additional information about the ASF is available at www.aldinescholarshipfoundation.org, or by calling 832-813-6500. 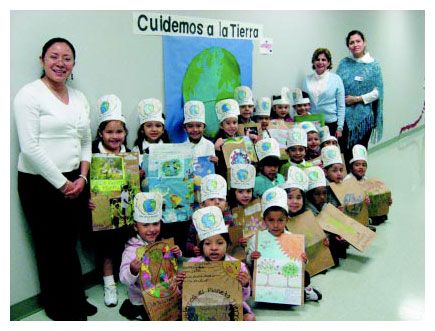 Last week, students at Keeble EC/PK received a hands-on lesson in ecology and recycling when the school celebrated Earth Day.

Telma Gonzalez’ classroom sent home a project for the family to do in celebration of Earth Day.

This project incorporated many PK Objectives: they had to write the year on their hats in decimal system grouping numbers the 2 – thousand in green, the 0 – hundreds in red, the 0 – tens in blue, the 9 – ones in green, then the most wonderful part of this project was that the children were given grocery store paper bags to take home and decorate with their families.

The lifeblood of our all-volunteer army

The United States Army is the finest in the world. Throughout our country’s history, these brave men and women have demonstrated unparalleled patriotism, valor, and resolve. I join my fellow Texans in saluting the often unsung efforts of the American Soldier.

The Army’s achievements would not be possible without the efforts of its Non-Commissioned Officers (NCO) Corps. These Soldiers — ranging in rank from Corporal to Command Sergeant Major and responsible for the “nuts and bolts” of daily training and operations in the Army at home and overseas — are truly the backbone of the Army. Oftentimes, commissioned officers are the public face of the Army, but NCOs work behind the scenes to get things done. Whether it’s the drill sergeant training new Soldiers, the squad leader caring for young Soldiers and their families, or the platoon sergeant leading a patrol in Iraq or Afghanistan, NCOs are out front, making things happen Army-wide every day.

The U.S. Army is celebrating 2009 as the “Year of the Non-Commissioned Officer.” Since 1775, the NCO Corps has distinguished itself as the world’s most accomplished group of military professionals. Historical and current accounts of NCO actions are exemplified by acts of courage coupled with a dedication and willingness to do whatever it takes to complete the mission. NCOs have been celebrated for decorated service throughout our nation’s military history – ranging from Valley Forge to Gettysburg, to charges on Omaha Beach and battles along the Ho Chi Minh Trail, to the current operations in the mountains of Afghanistan and streets of Iraq. The recent actions of Texas’ own Staff Sergeant Matthew Kinney, from Nacogdoches, represent the tremendous level of leadership, dedication and courage epitomized by the Army’s NCOs.

Staff Sergeant Kinney had already served twice in Iraq when he was deployed to Afghanistan in 2008. Kinney, a flight medic, responded to an urgent MEDEVAC request for four casualties in the rugged Korengal Valley of Afghanistan on October 16th. Once on the ground, Staff Sergeant Kinney discovered six American casualties in a small mud hut, as well as several other Soldiers taking cover from fire.

Demonstrating strong and decisive leadership in a very difficult situation, Kinney ordered all nonwounded Soldiers to secure the outside area as he triaged the casualties and stabilized the critically wounded. As hoist operations began, the aircraft and the shelter came under heavy machine gun fire. While completing a hoist, Kinney was able to locate the direction of the fire and redirect Apache gunships to take out the enemy threat, ultimately saving the crew in their MEDEVAC aircraft as well as the Soldiers still on the ground. As Kinney continued the evacuation, he repeatedly exposed himself to enemy fire as he diligently cared for his fellow Soldiers, without regard for his own physical well-being. Then, while en route to the Forward Surgical Team’s location, Kinney single-handedly treated the wounds of five critical patients.

His heroic actions that day earned him a Silver Star, our nation’s third highest military award for valor. He has also been awarded a Distinguished Flying Cross for a separate engagement in Afghanistan.

Staff Sergeant Kinney epitomizes the critical role played by our Army’s NCOs, and he and other NCOs like him provide the gold standard for others to follow. Today’s NCOs are more innovative and capable than ever; they lead by example, all while taking care of their fellow Soldiers, adapting to ever-changing environments, and taking on growing responsibilities. This year of recognition for our Army NCOs serves as an opportunity for Texans and all Americans to become better acquainted with the significant functions that NCOs carry out within our Army. They are truly a national treasure, deserving of our utmost gratitude and respect.

Please join me in celebrating the accomplishments of Staff Sergeant Kinney and these fine American patriots. I applaud the efforts of the Army’s NCOs as they train and fight every day to preserve our way of life and care for the American Soldier. I also offer my sincere thanks to our Army NCO veterans who have sacrificed in defense of our freedom and who continue to represent the best of both Texas and the United States. I am humbled by your dedicated service. Well done! 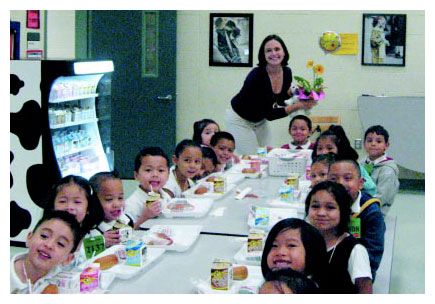