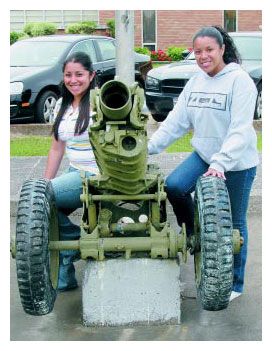 There is a saying that twins often act alike. But the Garcia sisters at MacArthur Sr. High have taken this a step further. Deidra and Cinthya Garcia are the number one- and number two-ranked students of the Class of 2009, which will graduate on Saturday morning. The sisters got the official word earlier this month.

“It was a relief,” Deidra said. “If we didn’t get it, it would have been a shocker.” As juniors, the pair was told they were the top-ranked students. In December 2008, another ranking came out which showed they had maintained their ranking.

And news spread quickly. “Soon after the announcement came out,” Deidra said. “I got a text message from last year’s valedictorian at (Texas) A&M congratulating me.”

Cinthya, who was away on a band trip, said that she didn’t learn about it until two hours later. The sisters said that they never set out to be top-ranked, just to do well in school and hope for the best.

“When we were in ninth grade we really didn’t think about our rankings,” Deidra said. “Because all we saw were ninth graders. But when we got here (MacArthur Sr. High) we saw how important rankings were.”

“I just wanted to be in the top five,” Cinthya added. The sisters attributed their success to their work ethic, which they got from their parents.

“They always told us that education was a priority,” Deidra said. “They taught us that if you’re going to do something do it right.” She added that their parents had been active in their education from elementary school, either as volunteers at the school or attending every meeting.

When the rankings came out this month, the girls learned that their grade point average was separated by a margin of .0195. Cinthya said that actually her unweighted G.P.A. was higher, but when the classes they took were taken into account Deidra came out ahead.

While taking some of the same classes, the girls learned that each had their own strengths and weaknesses.

The girls said that they never tried to compare themselves to each other, or turn their grades into a competition. “If we had been competing,” Deidra said. “It would have been a lot harder because we would stress out over each assignment. Then you miss the bigger picture.”

The girls said that they didn’t start getting stressed about grades until this month. “Since the school already knew the rankings we didn’t want to fall behind and disappoint anyone,” Deidra said.

After graduation, the twin Honor students will take similar professional paths. But then, just as in high school, the paths will separate.

Both intend to study biomedical science and attend medical school. Deidra said that she plans to specialize in cardiology while Cinthya’s specialty will be in neuroscience.

The girls will not have the chance to repeat the rare “1-2 punch” at the university level. While Deidra will stay local and become a UT Longhorn, Cinthya is leaving the Lone Star State for Johns Hopkins University.

END_OF_DOCUMENT_TOKEN_TO_BE_REPLACED 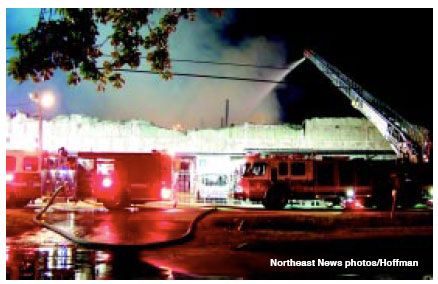 HOUSTON – Officials of the Houston Arson Squad, and the federal bureau of ATF (Alcohol, Tobacco and Firearms) made a surprising announcement last Thursday at a news conference. ATF asst. special agent Robert Elder, and Houston Arson chief Alison Stein stated that they had ruled out all possible causes of the massive warehouse fire at Gallery Furniture from accidental causes, and that meant the only remaining explanation was intentional arson. A faulty generator, originally cited as the source, was checked and did not cause the fire, he said.

The fire started last Thursday night, May 21, at about 8:40 pm in the northeast corner of the warehouse, behind the showroom on the North Freeway. Within a short time it had grown to engulf the whole warehouse, and the Houston Fire Department fought the four alarm fire with about 40 pieces of equipment and about 150 firefighters.

They were able to contain the blaze after about 2 1/2 hours, but the warehouse and its contents were completely destroyed, and the main showroom building experienced smoke and water damage. Owner Jim McIngvale reported that the sprinklers in the showroom areas went off, damaging much inventory.

ATF agent Elder estimated that the total loss will grow to between $15 and $20 million dollars. The BATF became involved soon after the fire was contained, and they sent one of their four National Response Teams to the site. These 20 man teams, equiped with special vehicles and equipment for investigations, are only activated when fires are large and of suspicious origin, according to ATF representative Franceska Perot, who spoke to the Northeast News.

After the fire, owner Jim McIngvale and his staff reopened the next morning at their second location in the Galleria area, at 2411 Post Oak Blvd. Since then, they have been trying to sell and deliver their furniture and electronics in a normal manner, until the main store can reopen, which may be in several weeks.

After the announcement of the arson investigation, McIngvale issued a statement saying that he was “shocked and stunned” at the ruling, and hoped the responsible parties would soon be apprehended. ATF agent Elder said the investigation so far had pursued at least 100 leads, and that all employees, neighbors and witnesses were being interviewed.

He noted that the fire started in an area not normally accessible by the public. As to motive, he said “there’s all kinds of motive – spite, revenge, or just a firebug. They run the gamut of why people set fires. But we don’t have an accident, we have an arson.”

Anyone with information regarding the fire is asked to call Crime Stoppers at 713-222-TIPS, or the ATF number, 1-888-ATF-FIRE.

END_OF_DOCUMENT_TOKEN_TO_BE_REPLACED 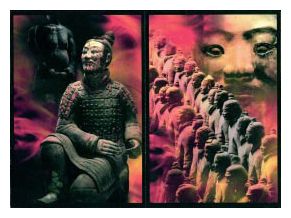 The Houston Museum of Natural Science presents one of the most extraordinary archaeological finds of the 20th century, considered by many to be the Eighth Wonder of the World: terra cotta warriors from the tomb complex of China’s First Emperor, Qin Shi Huang.

Intended to protect him throughout eternity, the warriors stood guard over a vast necropolis commissioned by the Emperor when he was only 13 years old.

Over 8,000 warrior statues between six and six and half-feet tall were found in three pits at the emperor’s tomb.

Marvel at more than 100 amazing objects, the largest display of terra cotta figures and tomb artifacts to travel to the U.S.

Did one of the statues just move?

One of the statues is not what it seems. Meet Jarry Cheng, a renowned terra cotta warrior actor who will amaze and entertain visitors in the exhibit through September.

Terra Cotta Warriors: Guardians of China’s First Emperor was named one of the top five “must” exhibits by Time Magazine. Tickets for the exhibit are $25 for adults and $18 for children 11 and under. Museum member tickets are $12. Admission price includes admission to the museum.

An optional audio guide is available to expand on your experience in Terra Cotta Warriors: Guardians of China’s First Emperor. Explore the exhibition in greater depth as you consider the research.

Experience the Eighth Wonder of the World through the stunning exhibition catalog and exquisite replicas of the warriors themselves are now available online.

END_OF_DOCUMENT_TOKEN_TO_BE_REPLACED 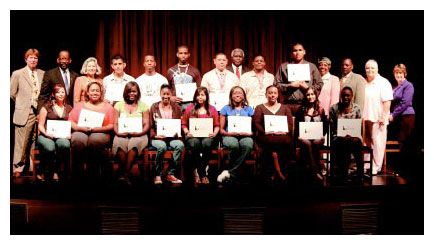 Pictured are the 15 Aldine ISD seniors who received Broad Prize college scholarships on Wednesday, May 27, during a surprise ceremony held in their honor at Carver High School. Pictured with the students are members of the Aldine ISD Board of Education and Deputy Superintendent Dr. Archie Blanson, back row, center, and Superintendent Dr. Wanda Bamberg, right. See related story in the print edition, p. 2.