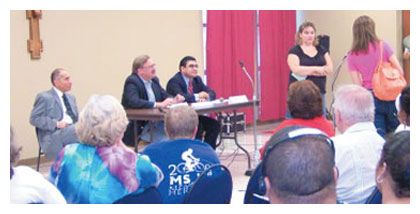 NORTH HOUSTON – As Congress debates the Health Care Reform bill, and prepares for a vote in September, local citizens and organizations have been meeting to voice their opinions and concerns.

One of these meetings was held last Friday night, July 24, at Assumption Catholic Church on Roselane St. near Little York. Hundreds of speakers and listeners turned out for this forum, hoping to influence the details of the bill.

Most of the comments and discussion were about features of House Bill HR675, known as the Single Payer bill. However, panelists pointed out that the bill is over 1000 pages in detail, there are several versions, and much of it is subject to change. Therefore many comments and answers could not be absolute.

Another approach is known as the Public Option, allowing citizens and companies to choose whether to have government insurance or not.

HCHD CEO David Lopez stated that Medicaid only covers 40% of healthcare costs today, and was in favor of reform. Armando Walle pointed out that Congressman Green is working on opening 2 new Federally Qualified Health Clinics in the area, one in San Jacinto City and one in the Airline/Little York area.

James Mason of Texas Impact spoke on initiatives that are happening now to improve healthcare delivery, including a new small business support by Texas, to start in summer 2010. Other organizations that were represented and spoke included the TMO, and the Annunciation Church.

Some spoke bitterly of lack of help with medical needs, others spoke about government programs that were better in Europe; others feared the bill would support abortion, or provide inadequate care, or mandate end of life decisions.

END_OF_DOCUMENT_TOKEN_TO_BE_REPLACED

A former Gallery Furniture was arrested and charged last week with setting the May 21st fire that destroyed the warehouse adjacent to the store’s main location on the North Freeway. Robert Carroll Gillham, 66, is charged with arson, a first-degree felony. Gillham was employed by the store five years ago.

Gallery Furniture’s owner Jim McIngvale said he was happy that the arrest was made, and even more so that no one was injured in the fire. Investigators say that Gillham told several people, including his girlfriend, as early as last year that he was angry with McIngvale and wanted to burn the store.

During a press conference last week, it was revealed that Gillham had borrowed his girlfriend’s red Dodge Stratus the day of the fire and when he returned it the girlfriend said she smelled gasoline in the vehicle. Arson investigators found melted red plastic and traces of gasoline in the northeast corner of the warehouse where the fire originated.

Witnesses have also come forward to say that Gillham offered them money to start a fire at the furniture store.

Two delivery drivers also reported seeing a white man in a hoodie sweatshirt driving in a red car away from the area behind the warehouse where the fire began. The two witnesses said the driver squealed the tires and almost hit one of the men as he drove off, shortly before smoke appeared.

The fire occurred May 21 at 6006 Interstate 45 North. Houston Firefighters were able to keep the blaze from spreading to the showroom and no injuries were reported. The location reopened earlier this month. Officials have said the total loss was between $15 million and $20 million.

Gillham is currently being held in the Montgomery County jail with a $150,000 bond after being arrested two weeks ago on burglary of a habitation charge.

END_OF_DOCUMENT_TOKEN_TO_BE_REPLACED

NORTH HOUSTON – A Job Fair that drew almost 4000 applicants, and a celebrity filled Ribbon Cutting marked the Grand Opening of a new production facility and corporate offices in Houston for Farouk Systems, a company that makes hair care products, such as CHI irons and BIOSILK hair care products.

The company was founded in 1986 by Farouk Shami, and has led the hair care industry with its technological innovations. Recently, Farouk has made a commitment to move his manufacturing and labs from overseas locations to Houston. He challenges other companies to follow his lead and help stimulate the U.S. economy.

On hand as celebrity ribbon cutters at the ceremonies were Governor Rick Perry, Houston Mayor Bill White, North Houston Greenspoint Chamber president Reggie Gray, and others. Farouk’s Houston facility is over 500,000 sq. ft. and will eventually employ over 1000 people. If his marketing approach is successful, Farouk said that many thousands more could be hired for his Texas production facility.

In his remarks at the opening, Governor Perry credited Texas’ predictable regulatory climate, low taxes and skilled workforce with attracting jobs and companies from around the world. The governor spoke at the press conference at the factory site in North Houston, on E. Richey Road, where Farouk Systems announced the relocation of its manufacturing facility from South Korea and China to Houston, creating more than 1200 jobs and generating $26 million in capital investment, according to Perry.

Part of the ceremonies included a stage show with entertainers, and a Texas BBQ. A job fair was held in conjunction with the grand opening.

This took place at Greenspoint Mall, where hundreds lined up outside and inside the mall, to fill out preliminary applications, and to be called back for a detailed interview later. Most of the first jobs are expected to be assembly line workers, and managers. Starting wages were said by the company to be about $10 per hour.

By the end of the day, the company announced that it had almost 4000 applications, for openings in the factory of about 1000 jobs. More hiring is expected in the future, they said. Applicants were also treated to a bus ride to the factory, and free hair styling with CHI and Bio-Silk hair care products.

END_OF_DOCUMENT_TOKEN_TO_BE_REPLACED

I have an important issue I want to share with the community. On April 28, 2009, North Forest ISD had to cancel school because standing water caused by inclement weather conditions and drainage problems made some of the roadways along the bus routes unsafe. The North Forest High School campus encountered leaks that resulted in the high school’s closure. While the conditions for some campuses were not as critical, canceling classes across the District was the best option for safety and uniformity. I want to thank parents, the NFISD transportation department, administrators and staff at our campuses for making the dismissal process as efficient as possible.

While this incident was unfortunate, it has served to bring an important matter to the forefront. The rainstorms were heavy, but they were not catastrophic. Our schools could have remained open if drainage systems in our area worked better; and any avoidable event that interferes with the education of our students is unacceptable.

On behalf of the entire North Forest community, I have been and will continue to call on city, county and state officials to make them aware of the District’s pressing needs and the needs of the larger community.

I have requested that available resources be directed to address necessary repairs to drainage systems in the area.

I have also taken a similar course of action as it relates to the heating and cooling issues at some of our campuses.

NFISD administration and staff are working to prioritize District needs and address those that we can within our budget constraints. Still, this will not solve this problem entirely, and I need your help. I need every North Forest resident to take PRIDE-a Personal Responsibility in the District’s Environment.

Many of the drainage problems throughout the community could be lessened with the removal of debris and litter from storm drains and ditches. Both the City of Houston and Harris County have ordinances that make illegal dumping and littering crimes. If the only way to stop illegal dumping, which can and will eventually clog our drainage systems and cause blight in our community, is to crack down on offenders with criminal charges and fines, I will advocate for that approach for the benefit of our students. We will do all we can to ensure that our children learn m a safe environment. However, I believe that if everyone takes PRIDE in the District and the community, we will achieve our goals. For example, these simple steps can help alleviate some of the drainage issues:

• Do not block any part of the drainage system including ditches, culverts or the drains themselves.

• Do not dump any material into a drainage system.

• Report illegal dumping if you see it in your community.

• Do not litter. Remember this school district and community belongs to all of us. If we don’t take PRIDE in it, we can’t expect others to.