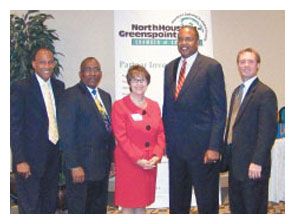 The North Houston Greenspoint Chamber held their annual Tribute to Education Luncheon last Thursday, with presentations by the three area Superintendents of the Aldine, North Forest and Spring Districts.

Chamber president Reggie Gray emceed the event at the DoubleTree Hotel, which was well attended by Chamber members and educators. To set the tone of the luncheon, he reported on a meeting he had with State Representative Sylvester Turner regarding the use of federal stimulus funds this year to pay for educational needs, but that in the next budget session in two years, local districts will be faced with making up the monies that the state does not have available.

In spite of the funding problem, two of the districts reported optimistically that they were meeting the needs this year for growth with new facilities that will open in their districts in the fall.

Aldine ISD now has 61,000 students on 72 campuses, according to Superintendent Dr. Wanda Bamberg. A new Pre-K will open on E. Mt. Houston, next to Excamilla, and be named for Norma Garcia-Leza. In the following school year, Aldine will open a new Intermediate and a new Middle School. Also planned, for 2012, is a new high school on Ella Blvd. She was able to report that a majority of Aldine schools, 72%, are either Recognized of Examplary by state TEA standards.

Even though her budget is balanced this year, she admitted that next year Aldine will look at a “rollback” election that would result in an increase in taxes, if the stimulus money is not available. In an effort to avoid a deficit budget, the construction of a new Pre-K has been delayed, and federal grants and Broad finalist monies have been pursued. She reported on the importance of the hiring of 3 new football coaches to the vaunted athletic programs in Aldine.

Superintendant Dr. Adrain Johnson is starting his second year as head of the North Forest system. He joked about the importance of a football coach to a district, but then said he had hired a new one, with experience at Yale University, to replace the coach Aldine had hired away. Also hired were a new CFO and a new Police Chief, he said.

“Things are changing at North Forest ISD”. He spoke about a new full day Early Childhood Program, funded by a $1,000,000 federal grant. He is putting emphasis on improving teaching quality, training them better, he said, so that if you can succeed at North Forest you can succeed anywhere. He has started a new Urban Teacher Transition Program, similar to medical residency, with 8 new teachers paired with Master Teachers for their training. Johnson mentioned that he has to deal with the community as well as the district, addressing problems of drop-outs, unemployment, health, and crime.

Unlike the other district who are planning for the future, he said, “My game is helping a District Survive. I have the comeback role. I am planning for today.”

Dr. Ralph Draper, Superintendant, said that his district now has 35,000 students, and is still growing, but not quite as fast as in the past. This year’s 3% growth compares with 6% previously. He is opening 4 new schools, three elementaries and one middle school.

Spring is operating on a deficit budget, about $1.5 million now and perhaps as high as $7 million next year. The stimulus money will have to be made up locally in the future, he noted. In addition, the economically disadvantaged is the fastest growing segment of the community in Spring ISD, he noted.

END_OF_DOCUMENT_TOKEN_TO_BE_REPLACED 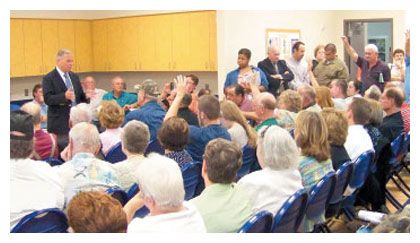 NORTHEAST HOUSTON – U.S. Congressman Gene Green has scheduled a series of Town Hall Meetings throughout his district in August, to report to the people on the work accomplished in Congress to date in this session, and to get opinions from the electorate in return. Normally these meetings during the Congressional break are civil, fact filled, sometimes personal, and not well attended.

But this year, due to a number of factors including the public’s concerns over proposed changes in national health care insurance, the weak economy, and organized opposition, the meetings have been packed, often with raucous and rude audience members.

The first of Green’s scheduled eight Town Halls was held last Monday night, Aug. 3 at the Melrose Park Civic Club, hosted by the club and its president, Judy Hoya.

The room was crowded with about 150 persons in attendance. After opening remarks by Green, about the Stimulus package, environmental legislation known as Cap and Trade, and the Health Care Reform proposals, the audience began a series of questions, and often loud and combative statements.

Several speakers in the audience said they preferred private insurance they now had, over any government programs that might replace them. Others were concerned over the high costs of health insurance, but afraid of restrictions and inadequacies of a government run program.

Green did his best to answer the questions in an orderly way, even when the questioners shouted and expressed anger. He explained that over 30% of the population have no medical insurance, and the Obama proposal is for Universal coverage. He also pointed out that in the U.S. we pay the most in the world for health care, but get less than adequate care in return. Green was questioned as to whether he had actually read the healthcare bill, and knew what it said. He answered yes, although it was 1000 pages long, and he held up an annotated copy as proof. He also pointed out that it is not final, and at least 60 amendments to the bill have been proposed and are under consideration.

The disruption in the meeting continued, with some turning to the subject of Iraq and Afghanistan. Also questioned was the need for “Cap and Trade” which will curtail the energy production in our area, or at least the emissions that result. Green pointed out his work on the Clean Energy Act of 2009, which provides for more energy in cleaner technologies, with more jobs created, and allowances to the local chemical industries.

Green also issued position papers on the Stimulus Act, pointing out benefits to the local economy, and a paper on the Benefits to the 29th District from the Healthcare legislation.

The noisy opposition to the Congressman’s remarks seemed to be planned and organized. According to some sources, a group known as the Houston Tea Party Society has a web site that encourages participation, and in fact disruption, of these meetings as a tactic to defeat the Democratic sponsored bills. Nationally, several organizations including FreedomWorks, Tea Party Patriots and conservative radio talk-show hosts, have been linked to the idea of causing problems at these town halls and therefore not allowing a thorough and objective discussion of the issues involved.