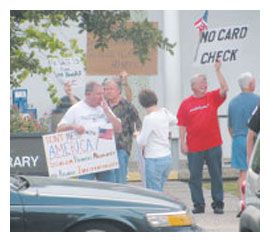 Congressman Gene Green is used to attending town hall meetings with low attendance. Last week was an exception. Over 400 people turned out for a town hall meeting hosted by the congressman. The majority was not silent, with many of those in attendance protesting Green, President Obama or the government in general either by voice or sign.

Among the complaints was that Green’s office was checking the ID of those attending, and allowing only those who reside within Green’s Congressional District into the meeting room. One protester questioned why Green was opposed to Voter ID, but required an ID at what was supposed to be a public meeting. When Green arrived at the site, he was welcomed with boos and catcalls. One constituent, however, congratulated Green on having the backbone to show up at the meeting.

“I have been doing these meetings for 20 years,” Green replied, “And I’m not going to stop now.”

Security was also heavy at the meeting, with the sheriff’s office, constable’s office and local Baytown police department represented in uniform.

Despite the large crowd that gathered for the meeting only about one fourth actually got in to hear Green speak. The meeting room at the Baytown library has a maximum capacity of 100 people and a representative from the fire marshal’s office was there to make sure the crowd did not exceed to the 100-person limit.

Green apologized for the size of the room, saying he had used the room many times in the past and it had never been a problem before. When he reserved the room in June, he added, he had no idea the attendance would be so large and once he realized he would need more space it was too late to find another meeting place.

Green started the meeting voicing his support of the Cap and Trade program, which allows chemical plants to purchase “carbon credits” rather than reduce emissions in order to comply with EPA (Environmental Protection Agency) standards. Green admitted the bill was not perfect but it was the best they could do, considering the amount of compromises required to bring the bill up for a vote. “If you want perfect,” Green added. “Don’t come to Washington.” Health Care was the topic many were interested in, and Green did not back down. After “untold public hearings” and “30 to 40 times it was amended” Congress had a health care plan, which Green says will not affect public debt. The bill, he said, will be paid for “by tax increases and other cuts.”

Green also took the time to take jabs at the Bush Administration, suggesting that the nation’s financial situation was because of tax cuts and big business bailouts. He suggested going back to the fiscal policies of the late 1990s (when Bill Clinton was president).

The question and answer period was when the anger came out, and the shouting began. The first question posed to Green was “Why are you and every other politician in Washington exempt from the Health Care Bill?”

Green was also asked, “why should we back something that is being pushed by someone who has not proved they are a U.S. citizen?”

The question referred to Obama opponents who say that he was not born in Hawaii as he claims, but rather in Africa and that he is ineligible to serve as president.

Green responded that the health care plan does not provide services for non-citizens.

END_OF_DOCUMENT_TOKEN_TO_BE_REPLACED

Back to School Festival 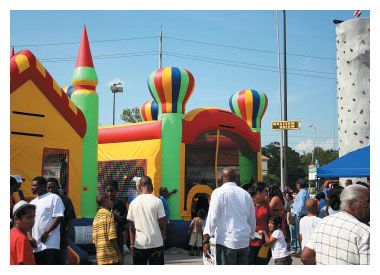 North Forest ISD and Fiesta hosted a Back To School Community Festival on Aug. 15 at the Fiesta Parking Lot on Mesa Rd. The NFISD Back-to-School Fest featured plenty of activities for children including moonwalks and a massive rock wall that offered for kids of all ages. There was also free food and entertainment. Free school uniforms and school supplies were also given to NFISD students.