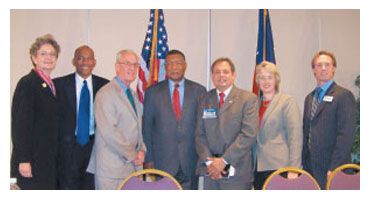 NORTHEAST HOUSTON – The Chamber luncheon was packed for a presentation of their qualifications by the four leading candidates for Mayor of Houston. The election will be held in November, but already the candidates have been to over 40 forums to garner support and votes. Last Friday’s luncheon was no exception, with over 100 chamber members and guests listening intently as the four hopefuls gave 15 minute presentations of their platforms and qualifications.

The program was held at the DoubleTree Hotel on JFK Boulevard, and was moderated by Attorney General candidate Barbara Radnofsky, and emceed by chamber president Reggie Gray.

Mayoral candidates included Peter Brown, Gene Locke, Roy Morales, and Annise Parker. Although billed as a debate, it really was more of a campaign speech by each of the candidates, with no formal challenges or rebuttals. This was partially due to time constraints, and followed the agreed upon format.

The candidates were asked to address three major questions: 1) What experience do you have to be mayor? and 2) Do you support the work of the current city administration? and 3) What do you propose to specifically help the North Houston Greenspoint area? Each speaker was to answer these points in a 15 minute period. There was not time for questions, rebuttal or additional discussion due to the lunch hour time.

The first speaker was Peter Brown. He emphasized his skills and experience as a small businessman, an architect and planner, for over 30 years. This has taught him how to hire and retain talent, he said. He also developed marketing skills that would be useful to the city. His architecture practice included the design of many urban environments, both city-wide and world-wide.

His next experience has been as a city councilman for two terms, working with the administration of Mayor White. Here he learned how important basic city services are, such as ditches and sidewalks, he said. Brown was in support of the current administration, but would put more emphasis on expanding police, and economic development. He also wanted to expand the transit system, and the light rail network. His vision for the future, or “Blueprint” as he named it, calls for tougher policing and better technology.

For North Houston, he wants to extend the North Light Rail line to the area, and reduce traffic congestion. He sees the area as Houston’s “Gateway” and thinks we should emphasize that. He noted that a new Public Safety Center is underway in the area, and thinks it should include a city hall annex, fire, and police.

Next to speak was Gene Locke. He emphasized his work as an attorney, and in government service with Mickey Leland and Mayor Bob Lanier, as city attorney. He currently serves as an attorney for the Harris County Sports Association, and the Port Authority.

His platform includes “4 Pillars” for a Bridge to the Future:

He cites his own hard work, and success in Houston, as an example for others to learn encouragement. He does not criticize the current administration, but says he will emphasize a hands-on approach, and more non-partisan participation. He feels that city hall could use a more business-like approach. Roy Morales was the next speaker. His experience includes 23 years as a team leader in the Air Force, coordinating a major project with NASA and the AF. He also is the chief technology officer for the Harris County Office of Emergency Management, he said.

Morales spoke of tax relief, better control of the city budget, and help to retain local businesses as a way to foster economic growth. He also saw a new soccer stadium as a catalyst for development on the east side of the city.

In his comments on the current administration, he said he wanted a cabinet level position representing education, and more work to keep students in school, and more emphasis on After School programs.

To help North Houston, he wants to extend the Light Rail to the Airports, make METRO more responsive and transparent, offer tax relief, and foster new business in the airport area. He wants to emphasize Houston as an Energy capital, not let places like Dubai claim this.

Annise Parker was the final speaker, and is the current controller for the city of Houston. Some polls place her in the lead of the four candidates. She joked about how many of these forums they have all attended, but got serious when she looked at the audience and asked, “Who do you trust to keep Houston moving forward?”

She said that her experience includes 18 years working for Mosbacher Energy, and as a small business owner for 10 years. She said that as controller she cut her office budget, by 2%, and helped the city cut their tax rate, at least by a small amount. As controller, she manages the money for the equivalent of a $4 billion corporation. Her plan for Houston economy is to emphasize “Hire Houston First.”

She will continue many of the policies of the current administration, but emphasize a collaborative leadership style.

In North Houston, she thinks public safety dollars could be better spent, using new technology. She thinks bad apartment complexes should be targeted for closure and tear down. She would expand transit, but start with buses and then light rail. When asked, “Why do you want to be mayor?”, she answered, “I want to make a difference.”

Only a few minutes were left at the end of the luncheon for one question about improving HPD, but most of the answers had already been covered in the presentations.

Next month’s luncheon will be a State of the County report by Judge Ed Emmett on Oct. 1.

Laura Wilkinson to be featured at NHGCC Gala 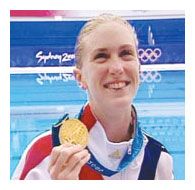 The Starlight Ball is an annual fundraising event, featuring a Dinner, Awards Ceremony, Silent Auction and Raffle. A cocktail reception will be held from 6pm to 7pm, and the main Gala will take place from 7pm to 10pm. Reservations can be made by contacting the Chamber office at 281-260-3163, or yhamlin@nhgcc.org.

Laura Wilkinson, Houston resident and the featured speaker, has a website with the following information.

Laura Wilkinson’s first leap of faith from the 10 meter platform was at the age of 15. After being told by one of her teachers that she was too old to start a new sport, Laura plunged into diving anyway. Nine months later, she was kicked off of her high school diving team for being a “waste of space.” The next year, Laura won her first US National Title, made the US National Team, and earned a bronze medal at the World Cup.

Laura overcame great obstacles to win her first major international gold medal, the 1998 Goodwill Games. She is the only American diver to ever win a gold medal at this prestigious competition. In 1999 after winning her second NCAA Division 1 title, Laura left her college scholarship behind to return home to chase her Olympic dream.

Shortly before the 2000 Olympic Trials, Laura shattered her right foot in a training accident. But with a persevering heart, she was not deterred by this injury. Together, Laura and her coach, Kenny Armstrong, designed unique training methods to utilize the mental aspects of diving to keep Laura’s “head in the game.” She had just three weeks back in the water to physically train prior to the Olympic Trials. The mental training began to pay off when Laura won the Trials making her first Olympic Team. Three months later, while wearing a protective shoe to walk up the ladder to the platform, Laura made history in Sydney, Australia.

Beating what many said were impossible odds in one of the biggest upsets in Olympic history, Laura, starting in eighth place and with a broken foot, came from behind to win the 2000 Olympic platform gold medal. Laura has also won the 2004 World Cup and the 2005 World Championships, becoming the only woman in history to win all three coveted world titles in platform diving. Along the way, she has won 19 US National Titles, been voted by the American public the 2000 US Olympic Spirit Award winner and was nominated for an ESPY award.

People always notice something that sets Laura apart from her competitors, her smile. She smiles during the most pressure packed and fierce competitions, almost like she’s removed from the situation, acknowledging her family and teammates in the stands. Laura explains, “I smile because I love what I do. I make a commitment before the competition to enjoy the experience however it turns out.”

Houston police are investigating the fatal shooting of a man at 390 Aldine Bender about 10 p.m. on Aug. 31.

The victim, Joe Fernandes, 54 of Sugarland, suffered a gunshot wound and was pronounced dead at the scene.

According to HPD Homicide Division Officers R. Figueroa three unknown male suspects dressed in dark clothing entered the Siesta Food Mart at 390 Aldine Bender and robbed the store clerk at gunpoint. At some point during the robbery, one of the suspects fatally shot the clerk.

Police say that from all indications Fernandes was cooperating with the robbers although the robbers could have been agitated that under the stress of the situation that he could not open the safe fast enough to suit the robbers.

The three suspects then left the store and got into an older model, gold or tan four-door vehicle parked on the side of the store in the 15900 block of Cotillion Drive.

The suspects were last seen driving southbound on Cotillion Drive.

A witness told police that the trio had been in the store for less than a minute. Police have not released descriptions of the suspects.

Anyone with information on this case or on the identities of the wanted suspects is urged to contact the HPD Homicide Division at 713-308-3600 or Crime Stoppers at 713-222-TIPS.

In a seperate incident, a woman was killed and two others injured in a drive-by shooting in Northern Harris County on Sept. 2.

Police say that the shooting took place around 2:30 a.m. in the 1000 block of West Mount Houston, just west of Interstate 45.

According to witnesses a black pickup truck pulled alongside another truck and someone inside fired a shot.

Two women and a man were hit by gunfire. One woman, whose name has not been released died at the scene. The other two were transported to Ben Taub General Hospital for treatment.

Police have not released a description of the suspects. A motive for the shooting is not known at this time.