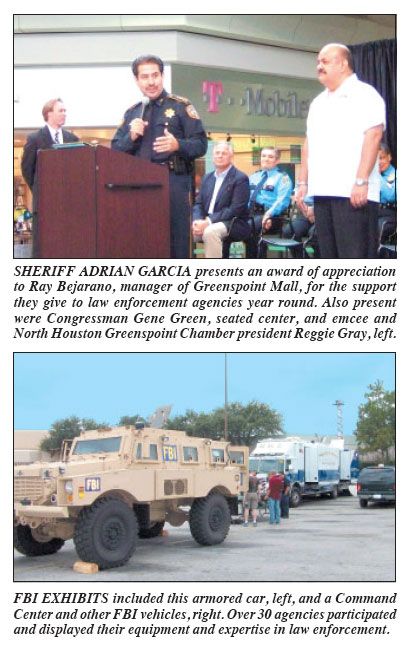 GREENSPOINT – The 24th Annual Law Expo, an exhibit of resources by over 30 Law Enforcement Agencies, was held at Greenspoint Mall this year. Last year the event had to be canceled, due to Hurricane Ike damage throughout the community. This year the weather was sunny and calm, and over 30 agencies participated in exhibits inside and outside the mall. The appreciative audience numbered over a thousand.

In addition to displays, families could have their children fingerprinted, and their Child car seats inspected for safety. Inside the Mall, awards and appreciation certificates were presented, and government officials spoke about the quality of public safety agencies serving out area. The audience was also entertained by YMCA kids performing gymnastics, by McGruff the Crime Dog, and music before and after the presentations.

The event was sponsored by the Greenspoint Mall, in partnership with the NHGreenspoint Chamber, Harris County Sheriff, and Houston Police.

Citizens could view exhibits, and in many cases sign up for classes or citizen participation. 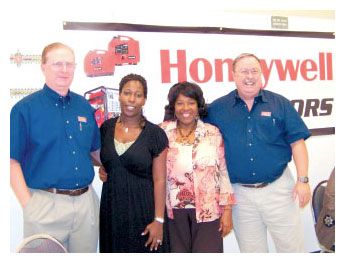 Jed’s Hardware owners Weldon and Clyde Bailey in their blue Jed’s shirts, and Y.O.U.T.H. officials Shawna Roy and Sylvia Bolling, at the presentation of the two emergency generators at last week’s East Aldine networking luncheon. The 4000 watt Generators were provided by Northshore Power Systems, licensee of Honeywell Generators, and are meant to be used by the agency when emergencies turn the building into a shelter for the community. 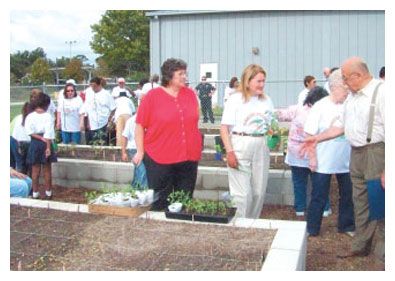 Community Garden to foster ACHIEVE for Seniors and Youth

Pct. 2 Commissioner Sylvia Garcia held a ribbon cutting at the new Community Garden, at the Northeast Community Center on Bentley last Friday, Sept. 18th. Present at the ceremony were seniors and young children that are participating in this ‘Garden Project”, part of a nationwide movement by ACHIEVE to foster healthy eating and lifestyles.

ACHIEVE stands for Action Communities for Health, Innovation & Environmental Change and is sponsored nationally by the YMCA. As part of the emphasis on good health, Harris County Health Director Dr. Palacia was on hand for the opening, as well as YMCA officials including Mariana Rodriguez and some of the children from their ACHIEVE project.

In her opening remarks, Garcia thanked those who had participated and helped in the project, including Master Gardener Lewis Mickler, Joe Dow of Dow Fence Company, Mike Harrison, and Pct. 2 staff Helen Timms, Lisa May, Debbie Copeland and many others.

The garden beds will be used to plant healthy crops of vegetables and fruits, she said, and emphasized the point by planting the first tomato plants with the help of several children. “I was raised on a farm,” she noted, “so I like this activity.”

Also related to her ideas for a better quality of life for everyone, she noted, is the Boys & Girls Club in the NFL YET Center, next door at the Driver Center, and a Health & Wellness Clinic run at the community center.