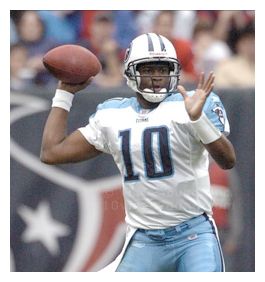 NORTH FOREST — Vince Young, quarterback of the Tennessee Titans of the National Football League, shared toys and gave bicycles to underprivileged kids in the North Forest community, at an event held last week.

Vince Young’s mother Felicia Young and manager/uncle Keith Young were also present on Sunday, December 20, 2009, to hand out gifts and greet children from the Forest Brooks community. The event took place at the Fiesta Mart located at 9419 Mesa Road and Tidwell, from 2 pm to 5 pm. Young, Rev. Gregory Griffin (talk show host) of KWWJ, and Fiesta Mart partnered together as corporate sponsors of this event to share their Christmas with the kids of North Forest.

Santa Claus was on hand to take pictures with the kids, as well as a clown to do face painting. Over 400 kids received toys and bicycles. Children had to be accompanied by a parent or guardian to receive a gift.

Young grew up in the tough Hiram Clarke neighborhood in Houston, Texas, where he was primarily raised by his mother and his grandmother. He wears the number 10 to show love and respect for his mother, whose birthday is June 10. Young wanted to be able to help these less fortunate kids by bringing smiles to their faces at the holidays.

For additional information on the Vince Young Christmas in Forest Brook, contact Mr. Charles X. White at 713-292-3436, or visit www.charityproductions.com.

Newly elected State Rep. Armando Walle held a series of town hall meetings prior to the start of the Legislative Session. The North Houston Greenspoint Chamber of Commerce held their annual awards banquet. Bill Townsend and Bill Ferebee were named Persons of the Year.

The Aldine FFA Auction set a record of more than $170,000 in sales as it celebrated its 50th anniversary. The Houston-Galveston Archdiocese announced that it would close the St. Charles Borromeo School. This was one of four Houston-area schools that the diocese selected for closure.

Aldine ISD and North Forest ISD were among local school districts to benefit from the federal stimulus bill. The funds went toward infrastructure, technology and security improvements. The East Aldine Improvement District changed its name to the East Aldine District.

The Houston Community College announced plans to seek an annexation of the North Forest ISD boundaries, which would provide lower tuition cost for students.

Heavy rains, possible driver intoxication and an ill-timed cell phone call were named as the cause of a car crash which took the lives of five children in a bayou near Greens Road. The father of the children, Briand Jenkins, was later charged with intoxicated manslaughter.

Alma Meza, a student at MacArther 9th Grade Campus, was killed when she was struck by a school bus. In December, the driver, Nellie Cormier, was indicted in the death. State Rep. Armando Walle’s bill strengthening penalties for graffiti passed the House and Senate. The Governor later signed the bill.

Harris County announced plans to buy foreclosed property in the Northeast Area and then resell them at 30% less than resale value to qualified buyers. Gallery Furniture was severely damaged by a fire allegedly set by a former employee.

MacArthur Sr. High was seeing double as twin sisters Deidra and Cinthya Garcia graduated Number 1 and 2 in their class. The local “Pro-Active Unit” of the Harris County Sheriff’s Office was featured on the nationally broadcast television program “COPS.”

The Renaissance Hotel, closed due to damage from Hurricane Ike in 2008, was reopened with full services. The Tradition Party Hall was packed with a standing-room crowd of residents protesting a permit request to expand Big K’s solid waste processing plant on Little York Road.

Gallery Furniture reopened its I-45 store following a devastating fire in May. A man attending a child’s funeral was fatally shot. The alleged shooter, Richard Toussiant, was also in custody of the three-year-old child when it died.

A groundbreaking was held for the construction of METRO light rail North Corridor. The Texas Ethics Commission fined Harris County Commissioner Jerry Eversole $75,000 for ethics violations. The fine was the largest in the commission’s history. The East Aldine District announced $8.5 million would be spent for mobility and other community improvements.

Robert Gillham, a former employee of Gallery Furniture, was charged with setting the May fire which damaged the furniture superstore on I-45. Congressman Gene Green drew irate comments at a series of town hall meetings over health care. Among the complains was that people living outside the congressional district were not allowed into the meeting.

The East Aldine District announced that Aldine Mail Route would be expanded to four lanes with a seven-lane bridge over the Hardy Toll Road.

The Aldine ISD was awarded the Broad Prize, a $1 million award given to the top Urban school district in the nation. The North Forest High School was locked down after gunshots were fired near it and the police sought the suspects.

The North Houston Greenspoint Chamber of Commerce named Lone Star College’s Dt. Steve Head its Person of the Year for 2009. Armando Walle announced his intention to run for reelection for State House District 140.

Arcane Comeaux, a man serving multiple life terms in prison, was captured in Northeast Houston after escaping from guards the week before in Baytown. 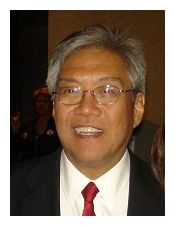 HOUSTON — At a Houston event surrounded by friends, family, and supporters last week, former Houston City Councilman Gordon Quan signed the paperwork to run as a Democrat for Harris County Judge. He would be running against the incumbent, Republican Ed Emmet, the current Harris County Judge.

“I want to bring new ideas to the County Government and look to address the root causes of the problems to develop solutions and not just put a bandage on the problem,” Quan stated during his remarks at the event.

Mr. Quan spoke on several issues he would like to address as Harris County’s next County Judge. Specifically he discussed the following priorities:

The former city councilman said he wanted to work hand-in-hand with the county commissioners, Sheriff Adrian Garcia, District Attorney Pat Lykos, and legislators like State Senator Rodney Ellis, who introduced Quan at the event, to set criteria for fines verses confinement for minor offenses, a centralized jail system for more rapid bonding, the development of a public defender system and a regional DNA lab to avoid wrongful confinement. He also said he wants to explore methods to remove from the criminal justice system people who are homeless and suffering from mental health issues. Quan argued this would remove “frequent flyers” from our jails and emergency rooms where they run up hundreds of thousands of dollars in cost for taxpayers.

Noting that the U.S. is facing difficult economic times, Mr. Quan said he would support the efforts of the Greater Houston Partnership in recruiting large companies and make helping small businesses a priority. He noted that small and medium-sized businesses provide more rapid job growth in Harris County and provide the majority of new jobs in America.

“For the past 30 years, I have been assisting businesses and entrepreneurs in making Harris County home,” Quan said. “In the private sector, I am already working on Regional Investment Centers to attract foreign investment to this County — New York and Chicago have already done this and we need to follow suit.”

“As County Judge, I will designate areas for ‘targeted employment’ for brokers to use in marketing investment opportunities.”

Mr. Quan ended his remarks by touching on seniors’ issues.

“One population I will continue to champion is our senior citizens,” he said. “As life expectancy has been extended, I want Harris County to view this population as an asset, not a liability. I would like to see us as a national leader on geriatric care.”