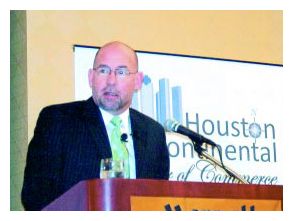 GREENSPOINT  The Houston Intercontinental Chamber (formerly the North Houston Greenspoint Chamber) held a dynamic and entertaining Forum and Luncheon last Thursday, that focused on the subject of Talent Management and variations on workforce deployment.

Three speakers covered various aspects of workers in todays businesses. Jill Silman, of Meador Staffing, spoke at the morning Forum session on the topic of Leading Across Generations. She developed the topic of eliminating conflict and improving productivity in a multi-generational work environment.

In the second Forum session, J. O. Dravis, of Dravis Management, spoke on Succession Development and Planning, and how to plan your business and develop your workforce to retain and cultivate key personnel.

The final speaker at the luncheon was C. J. Coolidge of Administaff, who presented an arousing and at times amusing topic, Harnessing Profit with the Modern Workforce. Speaking about his own success in business, he emphasized that we must embrace the new Gen X and Gen Y workers, and let them motivate themselves in a way they understand and respond to.

In a book he authored, he speaks of an organic business model that has replaced our old mechanical models. Innovation and creativity are the keys to success today, and they must be felt, not taught. He says we must redesign the Business Model to include employees that value relevance, uniqueness, and focus on what matters.

END_OF_DOCUMENT_TOKEN_TO_BE_REPLACED 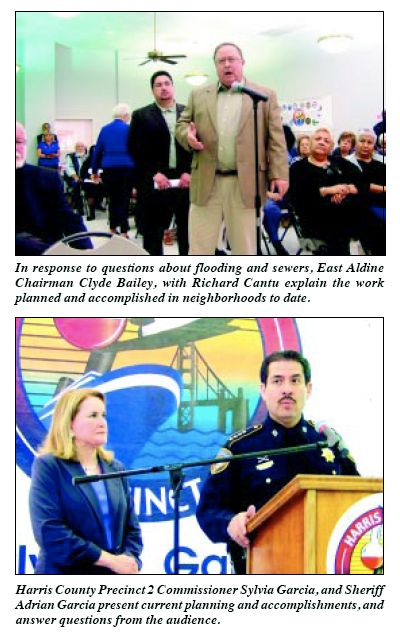 NORTHEAST  The Northeast Community Center on Bentley was packed last Thursday night with homeowners and citizens interested in a dialogue with their County officials and departments.

Several hundred people packed the hall, to listen to a presentation from Harris County Pct. 2 Commissioner Sylvia Garcia about the accomplishments of her administration in the last year, and to ask questions that were answered by many Harris County department heads that were present.

After listening politely to a long list of projects and activities that Garcia had initiated, completed or participated in with the county citizens, a number of residents asked pointed questions about flooding, sewers, crime, preservation of county sites, etc.

Commissioner Garcia spoke about efforts to hold down the County budget, and the reduction of the property tax by 1 cent since she took office in 2003. She said that due to the economic climate, some capital improvement projects that are planned and were to be paid for by the 2007 Bond election, have been delayed until favorable financing terms are available.

Garcia said she was here to listen to the priorities of the citizens in her precinct.

Sheriff Adrian Garcia also spoke to the audience, and then he and his staff answered questions later and took notes on areas of crime or traffic control that need more attention.

The Sheriff mentioned the work of his gang suppression unit, which is working with the FBI on this and the related graffiti problem, and he pointed out that this unit is housed in the area. He also introduced the new Patrol Captain for District II, Capt. Mike Richmond.

When the meeting was opened to citizen question, the topics were wide ranging, and not all involved the Northeast area. For instance, Ted Algon pressed the Commissioner on whether she would save or remove the Sylvan Beach Pavilion, and she said the decision was under study and not made. METRO construction on the North Line, and the disruption of traffic was questioned. A METRO representative answered that preserving movement and access to businesses, clinics and schools was a priority over construction.

A resident of the Greenwood Village area complained about flooding, and the high crime rate. He said he saw nothing done to alleviate these problems. Sheriff Garcia took the information and promised a response. He also pointed out that he was starting a real time crime monitoring system in the next 60 days, that will improve response to the rising crime statistics.

Residents of the Havner Street area near Aldine-Westfield complained about flooding and full ditches with no maintenance. County engineer John Blount, and East Aldines Clyde Bailey, explained the work being done to alleviate area flooding, including new water and sewer systems.

This story has been truncated for the web. For the full story, please see our print edition.

END_OF_DOCUMENT_TOKEN_TO_BE_REPLACED

Also getting votes were Felix Rodriguez Alvarado, Star Locke, Clement Glenn, Bill Dear and Alma Ludivina Aguado. There was a trio of Democrats who want to be the next lieutenant governor of Texas. They were Ronnie Earl, Mark Katz and Linda Chavez Thompson. Earl, with 46%, will face Chavez Thompson in a runoff.

Leading the ballot for county races was that of county judge Gordan Quan beat Ahmad Hassan with more than 80% of the votes.

In a closely watched race for the Congressional seat in District 18, Sheila Jackson Lee defeated challenger Jarvis Johnson by gaining about 67% of the vote for the Democratic position.

This story has been truncated for the web. For the full story, please see our print edition.