We had company from across the Mississippi for a few days, South Carolina to be exact. Ole sister decided it was time to visit her brother and his wife. We took off for San Francisco for a few days to see the sights and to watch her expression when she saw some of the goings on out there on the West Coast.

We didn’t miss much and had a large time seeing things one does not normally see. We rode the cable car to the end of the line which is downtown San Francisco in front of or near Nordstrom and Bloomingdale’s in the high rent district.

We decided to make a pit stop and into Bloomingdale’s we went. Women’s is on the second floor and men’s is on the fourth floor. They call theirs a lounge and a nice one indeed. Afterwards we were sashaying around like we were somebody, looking at things. Came across a nice men’s sweater and checked the price, near spit my teeth out when I saw $395.00 and the same price for a pair of ugly men’s shoes.

Later on out on the street at an intersection, this dude in a dress walked by and crossed the street. Sister asked me if I saw that and what was it, a man or a woman. It was a he dressed as a she with a cigarette in his mouth pointed up, mercy day it was tacky too.

Next day on the street car (F Line) we saw one man (salt & pepper) kissing another man. She looked at me and simply shook her head. I told her it was the city of brotherly love.

The seals are back on Pier 39 and a good many of them. They are as large as a bunch of hogs lying up on the floating docks; some probably weighed 600 pounds.

The women shopped till I was ready to drop; lots of stores sell the “SAN FRANCISCO” colored shopping bags, various colors and all with a zipper closure. The prices ranged from $12.95 to $2.99 for the same bag a couple blocks off the main drag, Chinatown too.

Riding the cable car one day I slipped my Bubba Teeth in and had my own laughter. People were looking at me like we were looking at the sweeties. It was hard not to bust out laughing at some of the younger people staring at my teeth. Of course it didn’t settle well with ole sister as I was sitting next to her.

Think it is fun to ride a cable car and hang on from the side? A little girl down from where I was sitting got tagged on the elbow by the side view mirror on a parked car. It didn’t hurt her but her father scolded her in German. I can just imagine what he said.

If you ever get to the Fisherman’s Wharf in San Francisco, by all means go eat a hamburger and fries at IN & OUT BURGER. Just plain good eating and probably the cheapest burger around the wharf. 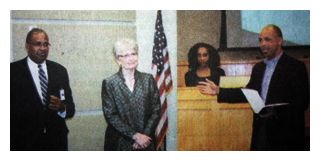 NORTH FOREST — As part of their effort to solve the educational and financial problems that have been a part of this school district, the board and administration have decided to form an educational foundation to provide a method to raise supplemental funds and provide services that are beyond the scope of the district’s reach.

In an introduction to the concept, Superintendent Johnson stated, “This is the chance – and the time – to do something for the district.”

A founding committee made up of interested citizens, alumni, staff and vendors has been meeting monthly to set up a steering committee that will eventually help to establish the education foundation.

A consultant has been hired to help with this process. Dr. Elaine Free, of Dallas, has experience in 19 other districts where she has guided the process of establishing a foundation. The consultant is being paid for with event funds raised outside the budget of the district, Superintendent Johnson explained.

Dr. Free explained that it will take until the end of the year to set up a foundation, and then perhaps two more years to raise the pledges and funds. The money will be used as directed by the foundation, but typically would be used for technology upgrades, student enrichment, and career and technology education for staff.

To attract donations, the foundation would be set up as a 501c3 tax exempt organization. 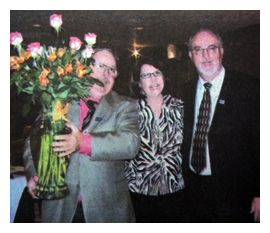 NORTH HOUSTON — In an emotional farewell reception held last week, members of four local organizations gathered to thank Bill Townsend for his work on their behalf while he was an officer at North Houston Bank. Townsend has taken a new position at Prosperity Bank in the Woodlands, and will not be able to serve on the boards he previously helped, due to distance and legal requirements of the various boards.

Townsend was a board member and committee chair for the East Aldine Management District, President of the Aldine Scholarship Foundation, Chairman of the North Houston Greenspoint Chamber (now Houston Intercontinental Chamber), member of the Aldine Optimist Club, and the North Houston Economic Development Council. In addition, as a representative of North Houston Bank he was active in supporting a number of local social and youth organizations, such as Aldine YOUTH and the Aldine Greesnpoint YMCA.

HUFFMAN — A birthday party was tragically interrupted by gunfire from a neighbor early Sunday, May 2.

A man was killed and two others injured by the gunshots. Raul Rodriguez, 44, complained to Precinct 3 Deputies late Saturday about noise at a gathering in the 300 block of Oak Knoll. The Constable Deputy indicates he informed the man who would later be killed of the complaint after determining that the partygoers were in compliance with state law.

Shortly after midnight Sunday, Rodriguez went to the party brandishing a handgun, and carrying a video camera. A beloved local man, a teacher was killed, critically injured was a Houston Fire Dept. Captain, and a third man was treated and released after being shot in the leg, according to Harris County Sheriff’s Detective Sgt. Ben Beall.

Rodriguez admitted shooting the men. He was charged with murder. He told deputies the shooting was in self-defense because the men at the party tackled him. Rodriguez sustained a fracture to his ankle by men at the party during the altercation, according to official statements.

“He had more than ample opportunity to retreat,” Detective Beall added.

Rodriguez is being held in the Harris County jail without bail.

Kelly Danaher, 36, who was hosting a birthday party for his wife and 3 year old daughter, was killed. Danaher was a P.E. teacher at Sorters Mill Elementary in Porter.

Senior HFD Capt. Ricky Johnson, 43, was in critical condition on Tuesday night at Ben Taub General Hospital. He was shot in the stomach area. Surgery is planned after he stabilizes. Johnson, promoted recently to Station 74 Captain, is a respected and dynastic firefighter, married with two daughters.

Marshall Stetson was also seriously injured by gunshots in the leg.

A neighbor reported being awakened by gunshots (not by party noise) and looking out his window to see men holding down one man and other people kneeling over another man’s body.

Although authorities say Rodriguez has no criminal history, “He got it in his head that they were making too much noise, and he decided to take it into his own hands,” Beall said. “The people at the party were minding their own business.