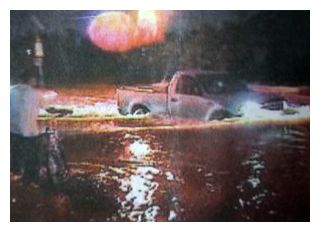 The weather bureau reported 2-4 inches of rain fell during the day and evening in the western and northern parts of Harris County, including Aldine and Greenspoint, and later in Galveston and Chambers Counties. More rain was predicted for the rest of the weekend.

Delays at Bush Intercontinental Airport were experienced by a number of flights. Roadways experiencing high water included frontage roads on I-45 near Parker, Tidwell at McGallion, and Eastex frontage roads near Aldine Mail Route.

Major accidents included an 18 wheeler that crashed on I-45 near the North Loop, closing all southbound lanes, and a car that drove into a retaining pond along the frontage road of I-45 near Parker. The woman driver, identified as Cassandra Bryant, 47, was pronounced dead at the scene, her car having sunk in over 6 feet of water according to HPD Sgt. E. Smith. The officer said it looked like the woman drove into a parking lot for safety, not knowing that a retention pond was under the flood waters, too. Witnesses said they tried to save her, but she stayed in her car as it sank.

Power outages were also reported by Centerpoint, with as many as 13,000 customers without power for several hours. By midnight the storms had passed through the area, and traffic was returning to normal in most areas. However, motorists were cautioned to look for more flooding over the next few days because of predicted storms coming from the west. 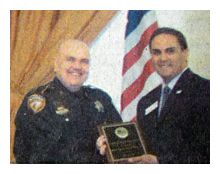 GREENSPOINT — Each year in May, communities around the nation honor their Public Safety Officers for their dedication and courage. The Houston Intercontinental Chamber holds an Awards luncheon each year, with the help fo the Greenspoint District.

The event was held last Thursday at the Hilton Greenspoint, with Chamber president Reggie Gray as emcee, and Greenspoint’s Jerry Lowry as the presenter.

The program included recognition by Chamber president Reggie Gray of the Lone Star College officers that patrol the Greenspoint Center location, including the Chamber offices.

Then Jerry Lowry opened with remarks regarding the dangers and rewards of being a police officer, which he knows from personal experience as an officer. He honored the following officers who had given their lives in 2009: HPD Henry Canales, Chamber County Sheriff’s Deputy Shane Detwiler, and Pasadena Officer Jesse Hamilton.

He then proceeded to present awards for outstanding service.

The main award, not given every year, was to Harris County Deputy John W. Laird, Jr.

Laird received this award for outstanding police work while at the same time fighting a battle with cancer, and raising a family with a wife and two children.

Laird not only is an outstanding police officer, but also is a Marine who saw service in Haiti, Bosnia, Liberia, Central African Republic, and other overseas assignments where he received many medals and honors.

An example of his work: while undergoing cancer treatment in 2009, he also responded to more than 1200 calls for service, and made 85 arrests.

Laird spoke after receiving his award, saying his desire was to emulate the qualities of his father. About law enforcement, he said he feels 99% of the people he deals with are good people. “I still have fun doing my job.” As to his cancer, he philosophizes, “Cancer is just another fight,” to be won by him no doubt. 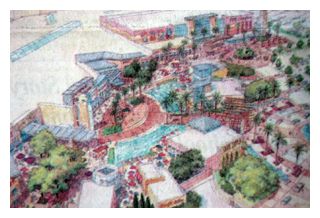 GREENSPOINT — Demolition equipment is busy at Greenspoint Mall, tearing down the old J.C. Penney store to make room for the beginning of construction on the new 20-screen movie theater.

This is part of a comprehensive plan to rehabilitate the mall, known as the Renaissance Plan. The project is being undertaken by the mall owner, TriYar Properties of Los Angeles, and the Greenspoint Redevelopment Authority. The Authority plans to commit $8 million of TIRZ funds to amenities and improvement in the outdoor public areas, while the mall owner intends to commit $24 million and build the new theaters, restaurants, and shops in the area to the east of the current entrance to the food court.

You gotta love the guv. Especially if you’re a newsperson.

Sure, Perry had big hair, while the glare off Democratic gubernatorial nominee Bill White’s shiny dome can be spotted by astronauts.

Sure, Perry looks like an extra in “Red River,” while White, with his big ears, looks like that “What, Me Worry?” guy, “Mad” magazine mascot Alfred E. Neuman.

Sure, the guv hints at secession, which White hopes will help his own succession.

Perry told Associated Press capital reporter Jim Vertuno that he had sent a coyote over the rainbow with a laser-guided slug, while loping through the forest with his daughter’s young Labrador Retriever and, of course, his handgun.

Perry told Vertuno that when he jogs in the hilly woods southwest of Austin, near the house rented for him by taxpayers while the governor’s mansion is being rebuilt, he carries the .380 Ruger in a belt. That’s because he’s scared of snakes, and has seen coyotes while jogging.

He spots a coyote eying the dog.

“He never looks at me, he is laser-locked on that dog. I holler and the coyote stopped. I holler again. By this time I had taken my weapon out and charged it. It is now staring dead at me. Either me or the dog are in imminent danger. I did the appropriate thing and sent it to where coyotes go.”

White, Houston’s former mayor and an ardent bicyclist, was asked by Gromer Jeffers of the Dallas News what he’d do if he was on a ride and saw a coyote.

“I go over to Memorial Park and I have seen coyotes,” White said. “As soon as they see me, they run away.”

“I don’t tend to be afraid of coyotes,” he added.

Some might find it “hard to believe that someone would be carrying a handgun on a morning run . . . But you just never know when you’ll need to defend yourself from snakes. (Let’s face it, you need some heavy artillery if you’re really scared of a snake.)

“So anyway, I’m running with my gun (‘Grunning’ is the technical term), and stopped at the Town Lake Animal Shelter to adopt some kittens.”

Six, he thinks. He just happens to have six kitty leashes. They head out for a job.

“Everything was going great,” Watson writes. “The kittens all run a five-minute mile pace, just like I do in the early mornings before anyone else is up. I was humming a masculine Bach sonata and feeling real good about balancing the state budget without federal stimulus money.”

Then they encountered a dozen giant, malevolent rats. The kittens were frightened.

“So I whipped out the pistol and said, ‘Rats, this is a .44 Magnum, the most powerful handgun in the world. It will blow your heads clean off. So you’d better let the kittens and me keep running, or I’m gonna do the appropriate thing and send you where giant rats go.’

“I quickly fired off five shots, taking out ten giant rats. Another one lunged at me and I shot him in the gut.”

Then the giant rat leader attacked.

“I did the only thing a man could do. The only thing that would make a really good story. I shot that giant rat dead.

“Now let me tell you about the three holes-in one I had last week. You see, I was golfing by myself…”

NORTHEAST — Houston Police announced the arrest of one suspect in the fatal shooting of Robert Butler Sr. in the 5400 block of Bennington on Friday evening, April 30.

Butler was parking an 18 wheeler when accosted by a pair of men. He was shot in the face, and died 12 days later.

Louisiana State Police arrested Diamond Markee Godfrey, 18, of Dayton in Ville Platte, Louisiana on May 12. They are also searching for another man, Damion Mann, 19, in connection with the shooting. Godfrey was allegedly the shooter in the incident. Anyone with information is asked to call Crime Stoppers at 713-222-TIPS.