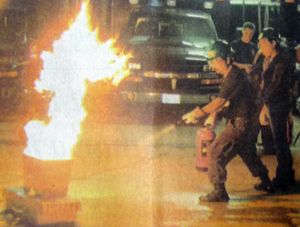 CERT stands for Community Emergency Response Team, and the concept is to train citizens to be first responders to emergencies, before public safety officials can arrive, or in the case of large emergencies, to be able to offer aid in lieu of officials.

Classes are being held at the ESD#1 building on Aldine-Bender Road, and started on July 22 and will end on September 9. Persons interested in the classes can contact Richard Cantu at 713-595-1220 for future enrollment.

The course is being taught by Fire Service, Emergency Medical, and Law Enforcement professionals. Subjects that are being covered include:

The course is free, and offered through the Harris County Office of Homeland Security and Emergency Management, and is co-sponsored by East Aldine District, and hosted by ESD#1.

CERT training is designed to prepare you to help yourself, your family, and your neighbors in the event of any anticipated disruptions and potential hazards before and following a disaster. Should emergency personnel not be available, you can use this training to save lives and protect property.

Additional information about CERT and the Harris County Citizen Corps is available at >www.harriscountycitizencorps.com.

NORTHEAST — Last Saturday, Greenspoint Mall along with 8 other sponsors, held a Health Expo and Back to School event to prepare children for their return to school. Mall assistant manager Petra Owens said that the Expo was well attended, and all the gifts were expended in the first few hours.

Included in the day’s events were health screenings, immunizations, I.D. kits, fun activities, and presentations of health life styles on the Health Stage. Also, 1000 free backpacks stuffed with school supplies were given out by Community Health Choice and the other sponsors, which included the YMCA, Houston and Harris Count Health Departments, and others.

The Health Expo also included information and assistance with CHIP and Medicaid. 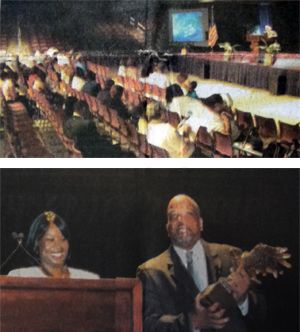 The spacious Campbell Center in Aldine was the venue for last week’s Financial Freedom Conference, presented by Andrew Watkins of the Watkins Group and the Pennsylvania Life Insurance Company.

Many hundreds of interested persons attended, to hear the speakers and learn about opportunities for financial progress and success in their careers and lives.

The conference was designed to bring the community and its businesses, groups, and organizations together and extend to each attendee information concerning increasing their income, reducing debt, expanding business opportunities, increasing awareness of community resources, and other ideas designed to impact the current status of participants.

In addition to the information booths and packets, the audience for the all-day event heard a number of motivational and business speakers. In addition to the speakers, the conference awarded Soaring Eagle Awards to key people in the community that “make a difference in areas such as ministry, education, community resources, employment, business creation and development.”

Watkins expects to repeat the conference again later in the year. For information, call 281-227-6847.

The Texas Education Agency has announced report cards for area school districts, and the results are mixed for Aldine and North Forest ISD.

The state’s accountability ratings are based on the percentage of students passing the Texas Assessment of Knowledge and Skills (TAKS) test, whether a school reached the state’s Required Improvement mark, and completion (graduation) rates for 2009.

Carver High School for Applied Technology earned Exemplary status. Their lowest test scored was in African American math with an 83% passage rate. They also had a 98.4% completion rate in 2009, or 185 out of 187 graduating.

MacArthur was ranked Recognized. Aldine got the Acceptable ranking. Nimitz also ranked Acceptable. Eisenhower’s failure to meet the required improvement levels helped give them an Acceptable rating. Among Ninth Grade campuses, Aldine, Eisenhower and Nimitz all hit Recognized status, while MacArthur got the top prize, Exemplary.

Despite 6 Recognized campuses and 1 Acceptable campus, as a district North Forest was declared Academically Unacceptable. They were 1 of 30 in the state to receive that ranking.

This was due in large part to the North Forest High School also making Unacceptable.