Airline Drive between Aldine Bender and West Road is getting a facelift.
Designs are being finalized on the $6 million project, which includes landscaping, street repairs, traffic signals and public art.
“These improvements are needed and will promote future development in the corridor,” said Executive Director of the Greenspoint Redevelopment Authority Sally Bradford. “We are looking forward to finalizing the designs and moving forward with this exciting project.”
Greenspoint’s Airline corridor is a bustling community brimming with businesses, schools and pedestrians. Some of the changes will make the pedestrian-heavy street safer to navigate. Designers are looking at ways to use landscaping to create crosswalks across the busy streets.
Construction will start in February 2011, and it should take about one year to complete. 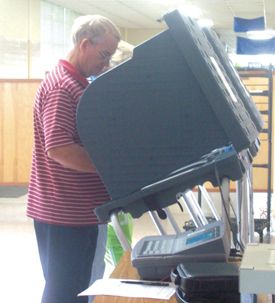 By GILBERT HOFFMAN
Northeast News
A very small turnout last Tuesday, Aug. 31, determined the school budget and tax rate in the Aldine ISD for the next school year.
Slightly more than 1,100 voters cast their ballots in the District’s tax ratification election, and the majority of the voters said “NO” to raising property taxes by 13 cents per $100 valuation of their real estate. This increase, which was approximately 10 per cent, would have increased the yearly income of the District from state and local sources by about $33.8 million. $15.3 million of that would have been from the state, due to reimbursement formulae, according to authorities.
AISD Superintendent Wanda Bamberg told the Northeast News that she was “disappointed in the vote. We wouldn’t have asked for the increase if it wasn’t necessary.”

Bamberg indicated that no additional cuts will be made in the budget for 2010-2011 because they have already cut $20 million from the budget last year, in the areas of magnet programs, after school activities, class sizes, and bus replacements. She indicated that the district will monitor spending this year, with a tight rein on spending.
The final tally was 682 “no” votes, and 439 in the “yes” category in the elction to get voter approval to raise the Maintenance and Operations (M&O) portion of the tax rate. The district’s Board of Trustees in June adopted the higher rate to increase the district’s revenues, and state law requires a tax ratification election to obtain voter approval.
Aldine was the recipient the last four years of national recognition by the Broad Prize, for outstanding education of a large urban district. Three years, 2004, 2005, and 2008 they were runners up, and received $250,000 for scholarships. Last year they were the top winner, and received $1 million for scholarships for seniors to continue college.
Bamberg said that property valuation will be down 3 to 5 percent this year, meaning less revenue from local taxes. The district will be watching closely what funding is available next year from the state legislature, and the federal government, as well as what additional cuts to make in 2011-2012 to keep the district budget solvent.