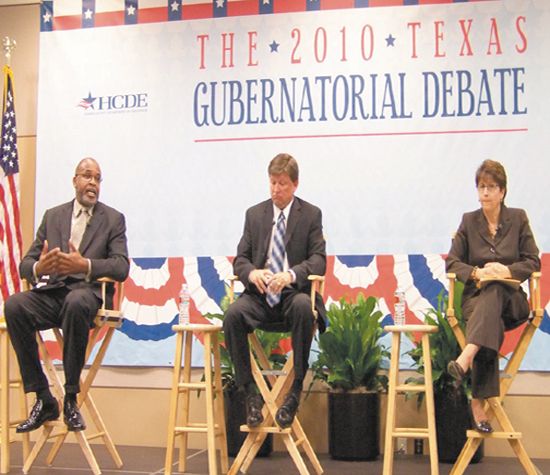 HOUSTON– As part of the Gubernatorial Debate program, detailed in another article in this issue, three superintendents of local school districts were also asked to speak on their experiences and opinions on Educational issues.
Participating were Dr. Wanda Bamberg, Aldine ISD; Dr. Adrain Johnson, North Forest ISD; and H. D. Chambers, Stafford Municipal District.
Topics that the superintendents were asked about included “money and budget shortfalls, student achievement and accountability, dropouts, and curriculum and instruction.”

These same topics were also addressed to the Gubernatorial candidates in the latter part of the program.
The forum and latter debate were moderated by Channel 13 news anchor Melanie Lawson. The forum was held at the Harris County Dept. of Education building on Irvington, and simulcast on the internet. It is available for watching now, at www.hcde-texas.org.
Dr. Bamberg mentioned that now we often train to be good test takers, due to the emphasis on TAKS. However, she said the challenge was really to prepare students for college, not tests.
Dr. Johnson gave a synopsis of his district, and some of their problems with accountability. He mentioned that their current TEA rating, unacceptable, was due to data that was old and in some cases, incomplete. He noted that his district was 70% African-American, and 30% Hispanic, not the average mix for local districts. When asked about dropouts and completion rates, Johnson noted that the economy is having an affect, as some students leave to work or solve family problems, and dropouts need a comprehensive solution in the community.
Dr. Chambers said that the #1 reason students drop out is they feel no one cares. He noted that the state has helped solve the problem with flexibility in school dates and hours, and the Dropout Walk has also made a difference.
Dr. Bamberg noted that “sometime our system doesn’t match student’s needs” implying that they were working on different educational programs to solve the problem.
Dr. Johnson noted that other reasons for dropouts, not related to the school district, are teen pregnancy, problems at home, health problems, and economic distress.
Lawson asked about the need for Fine Arts in the Curriculum. Dr. Bamberg stated that “We will be left behind if we don’t develop that conceptual ability.”