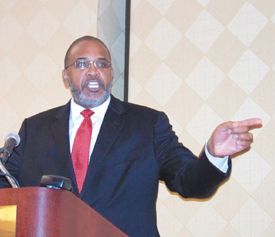 GREENSPOINT– Some 500 educators and supporters of the North Forest ISD gathered for lunch last Friday at the Marriott Hotel, and heard a report on the “State of the District 2010” delivered by a Powerpoint program, and an animated talk by NF ISD superintendent Dr. Adrain Johnson.
The meeting started with welcoming remarks from the 2010-11 Teacher of the Year, Mrs. Tamica Kirby-Barnes, NF High School principal Dr. C. A. Williams, and Board of Managers president George McShan. In his remarks, he noted the “incredible progress” of the district in the last two years, with 6 Recognized campuses, and a new attitude toward management and education.
Board of Managers’ Carolyn Bullard-Williams introduced the staff produced Powerpoint review of the District’s progress. This video covered the high points of the year, including the Mission, the Vision and the Staregies which are guiding the new NFISD.

Strategic Priorites on the video included Student Achievement, Quality Workforce and Compensation, Technologically Advanced Facilities, Financial Stability and Governance, and Safety and Community Involvement.
Superintendent Johnson’s talk elaborated on each of these themes, with personal experiences and heartfelt dedication to achieving greatness within the District. He noted that “we’ve come a long way” with reference to the last 200 years of minority struggle for equality, as well as the last two years of improvement at the District.
He singles out the Board of Managers for their help in the achievements. He also presented recognition to his department heads.
In his own enthusiastic way, Johnson said “we want to be outstanding. A new day brings new opportunity, and there is a New Day.”
Johnson also touched on some of the problems of the District, and assured the audience that they were being solved. One of the biggest, the Unacceptable rating at the high school, is being met with a new spirit, new leadership, community involvement, and state help, he said.
He repeatedly made reference to the relationship between the school district and the community, and how they need to help each other to move forward economically and educationally.
Highlights of the year that Dr. Johnson referred to in his talk included: a YES charter school within the district, to offer an educational option to academically interested students; a dual language learning environment; a partnership with Houston Community College for dual credit/college courses; use of Title I Priority Schools grant to improve the high school; receipt of a $1 million BP grant; a full day Early Childhood program; recruitment of highly qualified teachers, including the TFA program; computer access of student information from home computers; website redesign; expansion of a Business Partners Program; community festivals, clean-up, and outreach; a revamped and award winning police department. In addition, the District is working to establish an adjunct Education Foundation to facilitate funding of additonal advanced programs.
The luncheon closed with remarks from Congresswoman Sheila Jackson-Lee, whose interest in the District has helped raise large sums of money for improvements to facilities and programs. She celebrated the “Bounty of Diversity” represented by North Forest. 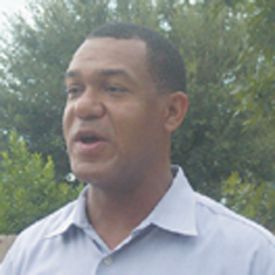 By BOBBY HORN JR.
A Harris County Grand Jury has chosen not to indict a Houston city councilman on a charge of evading arrest.
Houston City Councilman Jarvis Johnson, who denied fleeing police when he was arrested on June 30, received word Oct. 11 that a Harris County grand jury declined to indict him.
“I have maintained my innocence through this entire ordeal,” Johnson said. “We’re excited and certainly very appreciative of the grand jury coming back with a no-bill charge.”
On June 30, around 9:45 p.m. Houston Police Officer attempted to stop an alleged speeding vehicle in the 2300 block of the Eastex Freeway service road.
HPD spokesman John Cannon said Officer Steven Running turned on his emergency lights and siren and followed Johnson five or six blocks before the councilman pulled into a private driveway and stopped at 2606 Staples.
Johnson, in a statement, denied that he was trying to flee the office.
“Last night (June 30) was an unfortunate situation where the officer erroneously surmised that I was speeding and fled his warning — a claim I vehemently deny. At no point did I drive over 25 mph, run stop signs or maneuver around any vehicle. I acted in no way that would give any indication that I was attempting to flee or evade apprehension.”

Johnson was reportedly driving 62 in a 45 mile per hour zone.
Johnson was arrested. He later posted $2,000 bail and was released. He was not issued a citation for speeding.
Johnson’s attorney, Loretta Johnson Muldrow, said that the question was how soon did Johnson pulls over once he noticed the police car. In evidence presented to the Grand Jury, Muldrow showed that the time period was less than one minute.
In a statement issued shortly after the arrest, Johnson questioned whether the arrest was related to formal complaints the councilman had made about the number of “speed traps” in his district.
He has since urged Houston Police to stop setting up “speed traps” and concentrate their efforts in neighborhood patrols.
There have also been accusations of racial profiling made by members of the community.
Johnson has served the northeast side of Houston, including parts of Aldine and North Forest ISD since 2006.