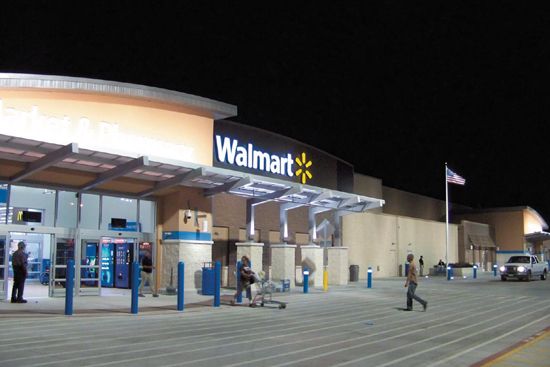 Shoppers were lined up outside the new Walmart at Northline Commons last Wednesday morning, at least an hour before the store opened for the first time at 8 a.m.
Enthusiasm was just as high inside the store at the official ribbon cutting, as about 200 guests and “associates” as the employees are called, listened to talks about how the efforts it took to get this massive store opened.

Store manager Paulo Morales was the official host, but many Walmart officials, local government officials such as Congressman Gene Green, state representative Armando Walle, and business persons were on hand for the opening. Green mentioned that he grew up in the immediate neighborhood, and welcomed the hundreds of jobs the store will provide, as well as new tax revenue, and community support for local organizations. Walmart announced at a reception Tuesday night that they were donating $25,000 to several local organizations, including the Houston Food Bank, LaRosa Family Services, Neighborhood Centers, Inc. and various schools within the community.
Also present were representatives of the local Greater Northside Management District, Rebecca Reyna, and the Northline Commons Manager Jeff Procell, with the representative of Berenson Associates, the property owners, Eugene O’Brien.
Northline Commons has undergone a complete transformation in the past three years, since Berenson Associates announced they would demolish the former Northline Mall in order to provide a more shopper-friendly convenient retail environment.
New Stores in the Commons includ Marshall’s, Ross, Office Depot, Conn’s, The Children’s Place, Verizon, Foot Locker, Shoe Carnival, Al’s Formal Wear, Urban Zone, Rainbow Fashions, Foot Action, Dollar Tree and others, including Palais Royal.
Restaurants include IHOP, Cici’s Pizza, Papa’s Barbecue, China Star Buffet, KFC, Pizza Hut, and Chuck E. Cheese.
Jeff Procell, general manager of Northline Commons, stated that “we are proud and excited to have Walmart join our tenant mix,” he said. Procell noted that Walmart would participate in supporting community giving and events, such as the Cinco de Mayo Festival, the partnership with Neighborhood Centers, Inc. for the Back-to-School Health Fair, and the annual toys and food baskets for need families in the Northline neighborhood.
At the ribbon cutting ceremony, students from Washington High School performed the national anthem and presented the colors. Cake and punch were served to the guests.
The new store is 194,000 square feet in size, and is open 24 hours a day. It carries full line of groceries, as well as 30 merchandise departments. It also has a drive-thru pharmacy and digital photo processing.
The store expects to employ 410 new associates. The average wage for full-time employees in Texas is approximately $12.53 per hour, according to a press release.

On Oct. 26, Harris County Commissioners Court approved a burn ban due to an increased threat of wildfires across the county.
There are now 67 Texas counties with burn bans, including Harris, Chambers, Grimes, Liberty, Montgomery, and Waller counties.
No outdoor burning is allowed except in an enclosure that contains all flames and/or sparks, outdoor burning activities authorized by TCEQ, ceremonial fires, non-commercial cooking, and prescribed “hot work”.
Backyard cook-outs and barbeques are allowed, as is welding and other “hot work” performed in accordance with county fire code requirements.
Parts of Texas, including Harris County, are extremely dry and vegetative fuels have reached critical dryness. Observed fire danger is high across Harris County, primarily east of U.S. 59.
Area fire departments have reported an increase in fire number and severity, including a fire in the Atascocita area that threatened homes and required a bulldozer and several ground crews to contain. The Texas Forest Service has reported that fires burned over 1,200 acres Oct. 26 in southeast Texas, including a fire in Montgomery County that destroyed three weekend camp houses and six outbuildings.
Violation of the ban is a Class “C” misdemeanor, punishable for up to a $500 fine. In addition, any person who starts a fire that causes damage to property without the consent of the owner may be charged with Reckless Damage or Destruction, a Class C misdemeanor, or Arson, a felony.
Residents are asked to exercise extreme caution when cooking outdoors. A small spark or burning ember can ignite dry vegetation. Winds will fan the flames and spread the fire rapidly.
The Harris County Fire Marshall also recommend that people remove combustibles within 30 feet of any controlled fire or hot work. A small, controlled fire can easily spread quickly and become an out-of-control, dangerous fire.
If you see an unattended fire, call 9-1-1 and notify your local fire department immediately. Even a small fire can spread quickly and threaten people and houses. 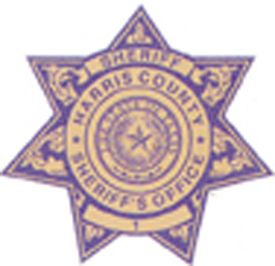 This new service is designed to allow the public to report low priority crimes that do not require a patrol response. Citizen can report:
-Misdemeanor thefts
-Missing/lost property
-Criminal mischief to public or private property including damage to a motor vehicle without suspect information.

Felonies and cases with known suspects will NOT be allowed on the online reporting system.
Once the citizen submits the report online, he/she will see the message “Your report has been submitted” and will receive a temporary case number.
Then, the report will go to HCSO Burglary and Theft personnel. The online system provides documentation needed by victims to file insurance claims.
The HCSO’s online reporting system will save time for victims and the deputies who otherwise might have to go to non-emergency scenes when they can be responding more urgent matters. 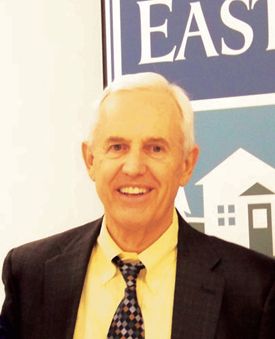 The East Aldine District was busy this week, kicking off the new Shopper’s Card program, and reporting to the community at their quarterly Community/Civic Forum.
Joy Rice of the Hawes Hill Calderon consulting firm led the discussion, which was held last Thursday evening, Oct. 28 at the District offices of 5202 Aldine Mail Route.
After a brief introduction, civil engineer Gary Montgomery reported on the Mobility and Environmental/Urban Design projects that are in various stages of implementation. He said that there are five road projects totalling about $85 million dollars to be built in the near future.

He emphasized that these dollar estimates are total project costs, and in many cases the EA District is only providing a small portion of seed money to obtain grants and funding from other agencies. It is anticipated that EAD will provide about $12.1 million for these road projects, and others will fund the $75.4 million.
These projects included improvements to Aldine Mail Route, with new paving and landscaping in the esplanades; an extension of the East-West road that will connect Gulf Bank and East Mt. Houston; and widening and repaving Aldine-Westfield Road. Intersection improvements at four major crossroads are also underway.
Ms. Rice spoke of Environmental/Urban Design projects, including a prototype of a new bus shelter, and a “Safe Routes to Schools” grant of $154,000 that has been obtained to provide bikes, school crossing guards, and other safety programs at four Aldine schools: Oleson, Worsham, Ruby Reed, and Escamilla.
Rice pointed out improvements to Keith-Wiess park, including new soccer fields and related parking that will be built along the Aldine-Westfield side of the park.
She also mentioned that the District was well underway in building a community garden in the Orange Grove/North Houston Heights neighborhood, with actual construction starting this month.
The District is very active in Public Safety projects, and she mentioned statistics that include seizure of significant amounts of drugs and money by the task force. Bike patrols are continuing and have been effective, according to Richard Cantu, District director of services. He also said that a CERT Class had been completed by about 59 local citizens, which trains them to help in emergencies. Rice said that Graffiti Abatement was continuing throughout the District.
Economic Development included working with city-wide EDC for new business prospects, development of a new East Aldine Town Center/Services Center by the Facilities Committee of the board, headed by Gilbert Hoffman, and a SHOPPER’S CARD Discount Program to involve local merchants and help families save money when they buy at local stores.
Rice also mentioned scholarships to local students through Aldine Scholarship Foundation, totaling 7 scholarships and a $30,000 yearly endowment. Other Community grants totalling $197,000 have gone to organizations such as the YMCA, Aldine YOUTH, Boy Scouts, Grandparents Raising Grandchildren, and MacArthur Project Prom, all organizations working to help our youth.
Neighborhood Clean-ups, Heavy Trash days, and three Dumpsters in local areas are part of the “Clean East Aldine” effort. Rice mentioned that other areas desiring dumpsters should contact Cantu at the District office, 713-595-1220.
Landscape Architect Kathleen Lynch presented information on new signage programs planned for the district, and landscaping.
Working with the city to meet their requirements, her firm K+W have developed landscaping to enhance the street medians, and signage to identify intersections in a distinctive “East Aldine” style. There will also be 4 intersections that have pylon signs that say you are entering the East Aldine District. These signs are currently being fabricated and soon will be erected, she said.
The meeting was attended by citizen groups, representatives of various organizations, State Representative Armando Walle, Sheriff’s deputies, and district consultants and officials interested in the topics.