North Forest ISD Board of Trustees returns to governance

“It has been an honor to serve the students of North Forest ISD,” said Board of Managers President George McShan, who has served on the Harlingen CISD Board of Trustees for more than 22 years. “As an elected school board member in my community, I understand the importance of local governance. I am excited about the future of North Forest ISD.”
In Oct 2008, TEA Commissioner Robert Scott appointed McShan, Rev. Dr. Willie Jones and Carolyn Bullard-Williams to serve on the Board of Managers after suspending the Board of Trustees for two years.
On Monday night, members of the North Forest ISD Board of Trustees thanked them for their service and vowed to continue moving the district forward.
McShan’s final official acts as president of Board of Managers included certifying the election results and presiding over the reorganization of the Board of Trustees.
Based on the results of the Nov. 2 election, Henry McGowen, who won 4,613 votes to beat his opponent Bullard-Williams in the Position 6 race, and Horace Williams Jr., who garnered 6,768 votes in an uncontested race for Position 7, joined Silvia Brooks Williams, Charles H. Taylor, Sr., Lois Edwards, Thaddeus Seals and Albert Coleman on the Board of Trustees.
After their reorganization, which resulted in the election of Coleman as board president, McGowen as board vice-president, Edwards as board secretary, and Horace Williams as assistant secretary, each of the trustees briefly addressed the meeting attendees. Coleman thanked members of the Board of Managers for their service.
“If you had not come when you did, we would not have a district,” he said. “If we stay focused and stay together, this district will survive.”
Superintendent of Schools Dr. Adrain Johnson said he looks forward to working with the Board of Trustees and called the occasion an historic moment that speaks to the strength of North Forest ISD.
“This district could have gone a lot of different ways four or five years ago,” he said. “But we are still here.”

By BOBBY HORN JR
While local law enforcement has stepped up their presence at the suspected crime-haven Haverstock Hills Apartments, Harris County is moving forward with a never-before tried method to rid the area of crime— civil penalties.
Earlier this month Harris County District Attorney Pat Lykos filed a public nuisance lawsuit against 33 “known members” of the Crips and Blood gangs. The temporary injunction prohibits them from congregating in a 57-acre area near Aldine Bender and Lee Road, which includes the 700-unit Haverstock Hills apartment complex.
“This is a grand day in Harris County,” DA Pat Lykos announced in a Nov. 10 press conference.

Lykos said the apartment facility has become a center of crime and gang activity. She added that through the injunction she hopes to keep gang members out of the area, thereby causing crime to drop.
“The apartment management is doing its best, but gangsters are swarming the perimeters,” said Lykos. “Elementary school kids are seen flashing gang signs and wearing gang colors. No longer will the people in Haverstock have to walk the gauntlet of gangsters, prostitutes or other criminal activity. We’ve drawn a line in the sand.”
A first for Harris County
This is the first injunction of its type to be filed in Harris County.
Under the injunction, deputies would have the authority to arrest on sight any of those named in the court document, even if they are not in the process of committing another offense.
The penalty for violating the injunction, a Class A Misdemeanor, can be up to one year in jail and a $4,000 fine.
According to the D.A.’s office a Dec. 10 court date has been set, where the state will present its petition. At that time, the judge has the option of approving the injunction, denying it or setting a second hearing to hear testimony from both sides.
Harris County not alone with problem
While the injunction is the first of its kind in Harris County, other cities have similar anti-gang initiatives. Among these are a 9 p.m. curfew for known gang members, banning known gang members from possessing a cell phone in a vehicle and the prohibiting the wearing of known gang colors.
The cities of Bryan, El Paso, Fort Worth and San Antonio have also created “gang safety zones” similar to the one Harris County is proposing.
In 2006 San Francisco enacted a “civil gang injunction” targeting five “safety zones.” The City of Oakland soon followed suit. According to the San Francisco City Attorney’s office, they have seen the percentage of identified gang members arrested for non-injunction offenses drop from 41% in 2007 to 14% in 2010.
Although challenges to the injunctions have been, appellate courts in Texas and California have upheld the injunctions. 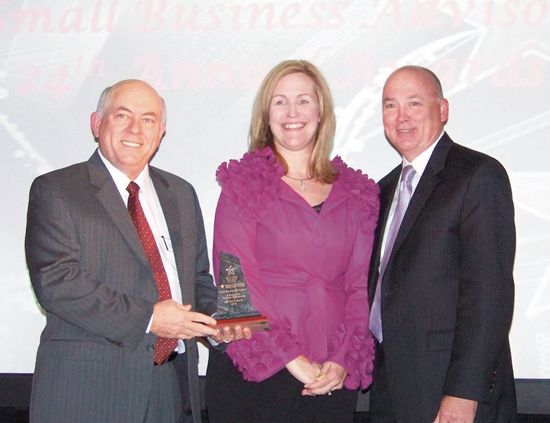 By GILBERT HOFFMAN
Northeast News
The Woodlands Waterway Marriott Hotel was the scene last Thursday night of the Lone Star College System Small Business Advisory Council 24th Annual Awards Banquet.
This banquet annually presents five awards, one in each of the System’s service areas, to a premiated small business that exemplifies business and financial success, contributions to their community, recommended by their peers, and a statement from the owner of their desire to be nominated.
Over 300 persons attended the banquet, which was emceed by Bennie Lambert of LSC-North Harris. Remarks were made by Chancellor Dr. Richard Carpenter, and Sal Mira, director of the LSC-SBDC.