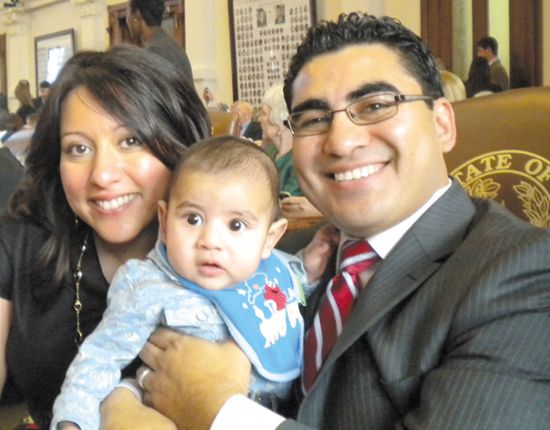 By BOBBY HORN JR.
AUSTIN—Like many of his colleagues, State Rep. Armando Walle says the biggest issue facing the 82nd Texas Legislature is the state budget.
According to the Texas Constitution, every two years the state must pass a balanced budget. However, Walle says that estimates are there is a $26 billion shortfall that has to be addressed.
Budget Issues
“The budget is on the top of everybody’s list,” Walle said. “The Governor and Lt. Governor have their head in the sand when they say there is no budget Armageddon.”

With the shortfall looming, Walle said that some tough decisions have to be made. “There is the human factor that has no be considered. Do we cut back essential service like Medicaid or cut school funding?”
Walle said that each state agency has been asked to find between a 5 and 10% cut in their budget. But this, he said, will not be enough.
“No one is going to get elected or reelected saying that they want to raise taxes, but we have to find new sources of revenue. We cannot continue to issue unfunded mandates, especially to schools. Their budgets are already tight enough, we can’t expect them to shoulder the burden alone.”
With the franchise tax and sales tax receipts not bringing in as much funds as expected Walle said that it is probable that fees will have to be increased to make up the difference. He also recommended dipping into the state’s “rainy day fund.” “They ‘Republicans’ don’t want to do it, but it’s storming. That is why the fund is there.”
With the shortfall, there has been some talk about legislators looking seriously at legalizing gambling. Walle said he would be open to the issue, but he does not hold much hope in it. “It (gambling) is a side show, a Band-Aid. The highest estimates are that it will bring in $3 to $4 billion, but that is anywhere from four to seven years down the road.
Local issues
Other than the budget, Walle said education is a key issue this session. “We have to close the dropout rate,” he said. “Education is such an equalizer we are setting them up for failure if we don’t do something.” Walle said that he would like to see changes to the juvenile justice system. “We have to do something to improve the community service system. If we just throw them (juvenile offenders) into jail, then we are not really helping them and they are more likely to become part of the system.”
During the last legislative session, a noise pollution ordinance authored by Walle passed. Walle said that he want to continue on that issue, as well as tighter enforcement on junkyards. During the previous session a junkyard bill passed the House, but stalled in the Senate.
Walle said that he also intended to continue fighting for water district protection. “I have filed a bill that will limit the percentage increase that a water company can put on its customers.”
Water rates is an issue that has been facing the area for many years. “I really appreciate how much Arlene (Nichols) and Kevin (Bailey) did on the issue and I intend to continue their fight.” Bailey served as state representative prior to Walle. Nichols was Bailey’s legislative aid and community activist.
Immigration
Walle said that he is sure that some form of a voter ID bill will pass this session, he just doesn’t know what form it would take. “We just have to see what happens after the committees are assigned.”
Gov. Rick Perry has also said that abolishing sanctuary cities is an emergency issue. Walle disagrees. “There are bigger issues than immigration.”
The son of an immigrant, Walle explained that the majority of immigrants just want to find a better life for themselves and their families.
He said that he hoped that Texas would not implement legislation similar to what Arizona did last year. “I think its wrong to go after a person just because of the way they look.”
He said that immigration is a national issue and that the federal agencies are doing their job. “I believe that President Obama has deported more people back to Mexico is his first two years than George W. Bush did in his first two years in office.”
He added that statistics are showing that crime in border counties on the U.S. side is actually on the decline. 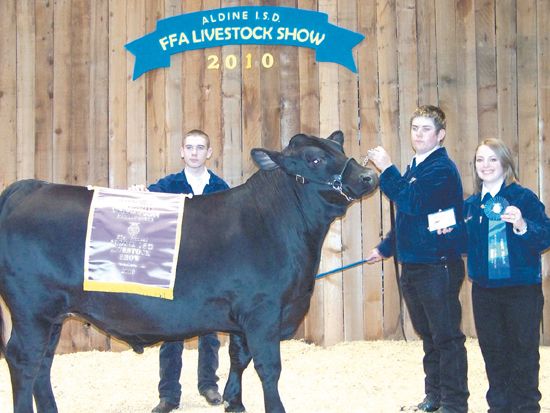 The 52nd annual Aldine ISD Livestock Show and Country Fair will be held Feb. 3-4 at the M.O. Campbell Educational Center.
AISD FFA (Future Farmers of America) students will display a variety of projects, ranging from art, horticulture to animals, with hopes of earning the designation of “grand champion.” Project judging will be held Thursday, Feb. 3, beginning at 7 a.m. and concluding at 7 p.m. in the Campbell Center Arena.

On Thursday and Friday, all projects will be on display to the public throughout the day. The Sale of Champions, which produced $183,000 in sales in 2010, will be held Friday evening at 7 p.m. and will also be held in the Arena.
On Friday morning, the second annual Art Breakfast and Auction will be held in the foyer of the Campbell Center beginning at 7:30 a.m. AISD art students will have their art projects on display and individuals who attend the breakfast will have the opportunity to bid on the artwork.
Additionally, barbecue plates will be on sale Thursday and Friday in Room 104 of the Campbell Center.
For more information, contact Aldine ISD’s career and technical education department at (281) 985-6646. The M.O. Campbell Educational Center is located at 1865 Aldine Bender Road. 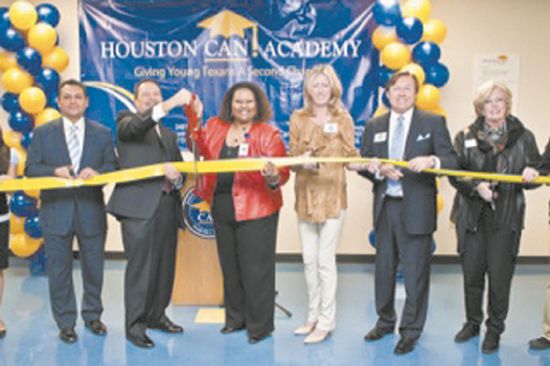 NORTHEAST HOUSTON– On Wednesday, January 12 Houston Can! Academy had a ribbing cutting ceremony at their new location in north central Houston.
The 34,000 square foot campus is located at 3401 Hardy Street. This North campus location has an enrollment of approximately 415 students and has room to grow to 450 students.
The facility was formerly a Yes Academy charter school campus. Texas Can! purchased the building and has spent $1.1. million in renovation and construction costs to create a state-of-the art learning environment for their students.

Houston Can! Academy students typically are 14-21 years old and usually enroll in the school as former drop-outs or students who have not been successful in traditional schools. Some are parents themselves, homeless or foster children who have lived in multiple homes and attended many schools. It is also a school of choice for parents whose students thrive in smaller classrooms with a more relationship-based education.
The mission of Houston Can! is to provide a second chance for at-risk youth and their families to achieve economic independence and hope for a better life.
For more information, visit www.texanscan.org or call 713-659-4226.