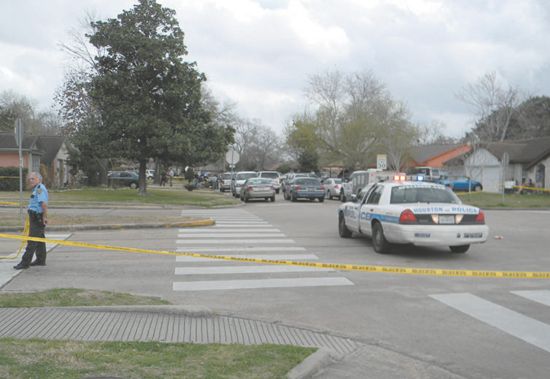 By BOBBY HORN JR.
A Houston police officer was shot in Northeast Houston Feb. 24 while attempting to serve an arrest warrant against a suspected member of a drug cartel.
DEA spokeswoman Lisa Johnson said that Nash Patel was serving on a multi-jurisdictional task force. The task force, in response to the shooting death of federal Immigrations and Customs Enforcement agent Jaime Zapata in Mexico last week, was conducting a sweep of several sites in the U.S. and Central America, Columbia and Brazil.

During the raid (known as Operation Bombardier), officer Patel was shot in the elbow and lower back.
He was taken to Memorial Hermann Hospital, where he is expected to have a fully recovery. The shooting suspect, identified as Mario Sosa Nunez, 33, was also wounded and was treated at Houston Northwest Hospital. He reportedly had several gunshots to his body.
The raid occurred at 207 Buckboard (near Imperial Valley), in the Greenspoint area, around 8:25 a.m. The scene of the raid is near Aldine ISD’s Black Elementary. School officials said that the school was on lock-down for several hours.
Houston Police said team members entered the house and were met by one armed suspect who began firing at officers with a handgun. Patel was the only officer hit.
Another suspect in the house, Albelino Serrato Espinoza, 30, was unarmed, and surrendered without incident.
This was not Patel’s first experience with being shot at during a narcotics raid. In 2008 he was part of a team that conducted a raid on a suspected drug house. The first officer to enter the house, HPD officer Rick Salter was shot in the face at point blank range. Patel, who was standing behind Salter, lifted the officer onto his shoulder and carried him to a nearby ambulance, saving his life.
Patel has served with the department since 1997. In November 2006 he became a narcotics officer.
The FBI says that the operation had a major impact in disrupting the cartel’s operations.
The joint task force, operating in various sites around the Houston area seized approximately $750,000 in U.S. currency, 322 pounds of marijuana, 13 kilograms of cocaine, 37 weapons, 10 vehicles, and arrested of 33 individuals.
Participating in these joint operations were: ATF, ICE-HSI, DEA, FBI, IRS, U.S Marshals Service, United States Attorney’s Office, Texas Department of Public Safety, Houston PD, Harris County SO, Pasadena PD, LaPorte PD, Ft. Bend SO, Montgomery County SO, Galveston City PD, Galveston County SO, Rosenburg PD, Texas National Guard, Brazoria County SO, League City PD, Freeport PD, Lake Jackson PD, TDCJ-OIG, Harris County Constables Jefferson County SO, and the Harris and Ft. Bend District Attorney’s Office

END_OF_DOCUMENT_TOKEN_TO_BE_REPLACED 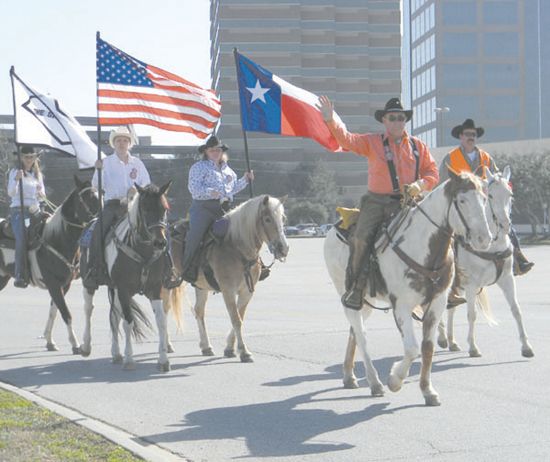 By JULIETA PAITA
With about 7 wagons and 60 horses, the Spanish Trail Riders did their sixth stop of the ride by Greenspoint Mall last Friday morning February 25, 2011 before hitting to Memorial Park, their last stop and in preparetation of the Houston Rodeo.
The Spanish Trail Riders started at Shepherd, Texas, a city about 126 miles up US 59 from Houston. “We have been riding for 6 days,” said trail boss Joe Cantrell. “We are going to ride about 115 and 120 miles.” The Spanish Trail Riders ride about 14-21 miles a day from one place to another, starting at Shepherd city until they get to their destination, the inauguration of the Houston Rodeo.

After doing a short stop at Greenspoint Mall, the Spanish Trail Riders ride to their last stop at Memorial Park. “We’re going to ride 21 miles the last day plus ther parede,” said Cantrell.
The Spanish Trail rides arrived at Greenpoint Mall around 9:30 a.m. on a friday and “It takes us to 4 o’clock this afternoon to get to Memorial Park,” said Cantrell. At Memorial Park, they should join other 12 trail ride groups. During that night, they had some rest to be ready for their participation in the parede which was on Saturday February 26, 2011 at 9:30 a.m.
The trail riders as well as the parede are the traditional start of the Houston Livestock Show & Rodeo which runs this year from March 1 through March 20.
Trails date many years ago when people move west in search of a dream and cowboys transported cattle. According to Houston Rodeo website, in January of 1952 the firts trail was formed to incresed awareness of the show. Trails todays are an attempt to recreate the Old West.

END_OF_DOCUMENT_TOKEN_TO_BE_REPLACED

By BOBBY HORN JR.
The Harris County Sheriff’s Office made a grisly discovery in what is believed to have been an abandoned car near an Aldine ISD elementary.
On the morning of Feb. 24, school officials at Bill Worshem Elementary School, located in the 3000 block of Hartwick, noticed a car parked nearby that appeared abandoned.
According to Sergeant G. Pinkins, sheriff’s office spokesman, deputies arrived at the scene at approximately 9:20 a.m.
“Upon arrival deputies found an unidentified black male deceased in the rear seat of a vehicle parked along the roadway,” Pinkins said.” It was later determined that the victim had sustained several gunshot wounds.”
The body was sent to the Harris County Institute for Forensic Sciences for identification. As of press time, no identification made been made.
“The Harris County Sheriff’s Office Homicide Unit is conducting the investigation and no motive for the shooting has been established at this time,” Pinkins said.
The investigation is on-going and anyone with information is asked to call the Homicide Unit at 713-967-5810 or Crime Stoppers at 713-222-TIPS (8477).