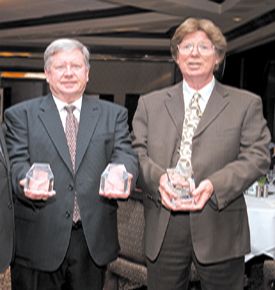 The East Aldine District made their annual Strategic Partner Awards last Friday night, to thank those community leaders, businesses and organizations that have contributed to the goals of the District.
Hosted by Chairman Clyde Bailey, and emceed by Executive Director David Hawes, the awards dinner at the Greenspoint Club was well attended by the community.
To start the evening, Hawes reviewed the mission statement of the District, and then enumerated the accomplishments during 2010 in the various areas of the Service plan.
Hawes also spoke of the goals for 2011, which had been reviewed and approved earlier in the day by the EAMD board.
In addition, Hawes reviewed the financial history of the District since its inception in 2002, growing from first year income of $800,000 to a projected budget for 2011 of over $3,000,000.

All income comes from a 1 cent sales tax authorized by residents in 2001.
The highlight of the evening was the awards and thanks presented to those who have helped the District achieve its goals in 2010.
Receiving awards from the District were Volunteer of the Year Virginia Bazan, and Chairman’s Award to State Senator Mario Gallegos.
Strategic Partner Awards were presented as follows:
Community & Youth Services to Aldine Optimist Club, Steve Mead and Jan Winn;
Public Safety to Harris County ESD-1;
Public Health to Harris County Health Education & Promotion Division;
Governmental to State Representative Armando Walle;
Education to Aldine ISD, represented by Superintendent Wanda Bamberg and many of the AISD board who were present;
Business to H-E-B supermarket at Aldine Westfield.
Hawes also recognized his staff for the grood work and support that they give the District.

END_OF_DOCUMENT_TOKEN_TO_BE_REPLACED 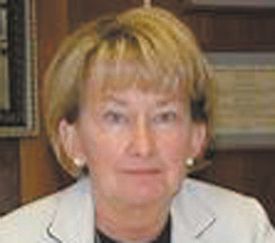 MacArthur Senior High School principal Nancy Blackwell and Stephens Elementary School principal Raymond Stubblefield were recently named Aldine ISD’s top principals by their peers.
Blackwell was named the district’s Secondary Principal of the Year, while Stubblefield was named AISD’s Elementary/Intermediate Principal of the Year. The two were voted as the district’s top two principals in balloting by other principals across the district.
Blackwell has been an educator for 36 years. She began her career as a teacher at Orange Grove Elementary School. During her tenure in Aldine, she has served as principal at Worsham Elementary School (four years), and Hambrick Middle School (nine years) before being named the principal at MacArthur Senior High School six years ago.

END_OF_DOCUMENT_TOKEN_TO_BE_REPLACED

By GILBERT HOFFMAN Northeast News
NORTHEAST– The board of East Aldine District met last week to review annual progress, and set goals and budgets for 2011 in accordance with long term priorities in the Service plan adopted in 2001. Details of these items are available in a booklet available at District offices, entitled The Report to the Stakeholders. A summary of the Report appears on page 8 of this Northeast News.
Income for the district, based on collections from the 1¢ sales tax, is anticpated to be $3,400,000, compared with $3,242,000 last fiscal year. Cash on hand for 2011 is $15,815,423 in three categories: General Fund $6,795,531; Capital Projects Fund, $6,878,662; and Debt Service $2,141,230.

In the 2011 Budget, the District plans to spend $2,094,747 in the General Fund. Projects include Water & Sewer $104,731; Mobility $63,617; Environmental & Urban Design $381,197; Public Safety $790,726; Economic Development and PR $340,021; Community Development $192,729; and Administration $221,724.
In the 2011 Budget for Capital Funds, the District plans to spend $13,065,021. Projects include Capital Improvements $168,156; Transportation & Mobility $2,830,090; Water & Sewer Projects Service Zone 11 $7,023,859; and Water & Sewer other $2,588,415.
The board reviewed the status of the Aldine-Westfield improvements, and reviewed slides that showed completed design studies for Aldine-Westfield, JFK Boulevard, and Gulf Bank/E. Mt. Houston. These projects are not funded for construction. Only a resurfacing of Aldine-Westfield is currently planned by the city for 2011. The district is pursuing state and federal financing to construct the above projects, Hawes said, including widening of Aldine-Westfield to 4 lanes. After the city completes the resurfacing, improvements to intersections are planned. Other Mobility work includes improvements on Aldine Mail Route, including construction of curbed and landscaped medians.
In Economic Development, the board reviewed recent construction by new businesses. Economic Development director Gretchen Larson pointed out a new business park on JFK Boulevard, known as Kennedy Greens, which now has 7 new buildings built and leased. One of the businesses, Noble Drilling, has created 200 temporary training jobs, and will eventually have 50 permanent jobs on-site. The EDC is working with Lone Star College, the Houston Intercontinental Chamber, and the North Houston EDC to bring new businesses into the area.
Also initiated last year was the “Shop East Aldine” campaign, with partipating merchants offering discounts and incentives to shoppers with a “Shoppers Card.” This program is expected to be expanded in the coming year, with some refinements in its appeal. The district also maintains a website, www.aldinedistrict.org.
In water and sewer construciton, the District plans construction in 2012 in Inwood Place, Mary Eleanor/Mary Francis, and Wherwood and Benton Place districts. They are currently working on a trunk line project east of US59 in Zone 11. They are also seeking an engineering grant for Westfield Estates sewers and more of Zone 11. See the map on page 1 of this issue for location of some of these areas mentioned.
The District is working with the Houston Parks Department for improvements in Keith-Wiess Park, including additional soccer fields, parking, restrooms and a public safety building.
The District continues Public Safety activities, funding a Sheriff’s Pro-Active unit, the Sheriff’s storefront, nuisance abatement, bike patrols, CERT team training, and graffiti abatement. In 2010 the Pro-Active unit seized over 300,000 grams of marijuana, 2972 grams of other drugs, $22,812 in cash, and 38 weapons. Arrests included 483 misdemeanor, 288 felony, and 188 warrants served. The Sheriff’s storefront has been renamed “Public Safety Center.”
Other activities the District has budgeted for 2011 include continuation of the Community Grants program, leadership training with CERT classes, and Clean-up promotions throughout the community.
Increased activity by the district has necessitated a move to larger quarters, which will take place on March 15th. The new offices are at 5333 Aldine Mail Route, adjacent to the Jed’s Hardware and Lumber store. Extensive parking, more offices and support spaces, a conference room and a larger meeting room will be available for district and public use.
The District is also planning to start a new program to serve the community, Public Health & Neighborhood Services. Some of this will include working with other groups, such as the Harris County Public Health.