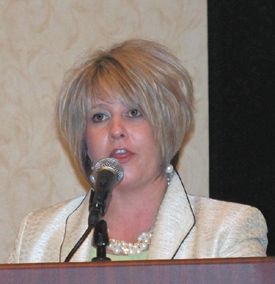 NORTHEAST– At a well attended luncheon in Greenspoint last Thursday, March 24, the Greens Bayou Corridor Coalition made its annual report to the public on activities and progress. The report was made by Executive Director Regina Lindsey, and emceed by Development Director Jill Bullion. Keynote speaker was Houston Mayor Annise Parker, speaking on Proposition 1, the Drainage fee proposal, and its impact on regional flooding and drainage.
The GBCC report included details on a new park, a master plan for the entire 45 mile waterway corridor, and a trail system. It also discussed how retainage areas would help reduce future flooding.

The GBCC mission is to provide recreation, economic development, and an enhanced quality of life along the bayou corridor. Also the goal is to reduce flooding in its service area. The GBCC is a private organization, started in 2007 and funded by membership dues and grants. It has a number of public agency partners, including the National Parks Service.
Members and supporters who were thanked during the luncheon included Chairman of the Board Bill Franks, Jack Drake of the Greenspoint District, Sustaining members East Aldine District, Greenspoint District, Williams Brothers construction, International Investors Group, KBR, LJA Engineering, Triple B Services, and many corporate members and associate members. Sponsors of the luncheon also included Johnson Radcliffe Petrov & Bobbitt, and Lone Star College-North Harris.
Awards of appreciation were presented by Chairman Bill Franks, and included founders Joe Wozny and Jack Drake, Houston Endowment, National Parks Service, Willowbrook Rotary Club, Mike Castro, RVi planning and landscape architecture, and Triple B Services.
In her annual report of progress, Lindsey showed pictures of the West Reach Clean-up last October, an example of how the bayou is being restored to health.
In the North Reach, which included Greenspoint and Aldine, Bart Baker is committe chair, and progress has been made by planning 4 detention basins, plans to annex some ungoverned land next to East Aldine District, construction of Ida Gaye Gardens, a senior park next to a housing project, an award from Texas Dept. of Transportation for trails extending from Wussow Park out to a future skateboard park and soccer complex at Glen Forrest Basin, and a grant of $10,000 from Trees for Houston.
On the East Reach, a canoe trail will be built with the Houston Canoe Club participation. 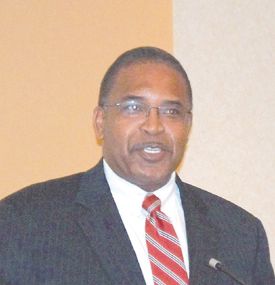 NORTH FOREST– The recently reseated Board of Trustees of the North Forest school district took unexpected action last week, in placing their superintendent, Dr. Adrain Johnson, “on leave” and replacing him with an interim appointment, Department head Edna Forté as acting superintendent.
In a statement issued to the Northeast News, the board said “In light of ongoing fiscal deficiencies, graduation rate concerns at North Forest High School, accreditation issues, and time sensitive staff reduction priorities, in the best interest of the district, the Board of Trustees felt it necessary to move in a different direction by placing the Superintendent on paid administrative leave.

“Educating the students of NFISD continues to be the number one priority of the district. The Board is confident that the district has capable and competent individuals who can continue day-to-day operations. Effective immediately, Edna Forté, Executive Director of Federal and State Programs, will serve as Acting Superintendent.”
The board voted on March 28, at a special called meeting, by a vote of 7 to 0 to place the current superintendent, Dr. Adrain Johnson, on paid leave.
It was not clear, from statements made by board members to the media, what the next step will be, and whether the board will move to fire Johnson. The NFISD board, with different members, has a history of firing superintendents, and in at least one case rehiring him. And four of the last five superintendents have left due to firing or pressure from the board.
Johnson was placed in charge of the North Forest district in 2008, when the Texas Education Agency took charge of the district as allowed by law, replacing the trustees with their own Board of Managers. However, the law only allows this to be sustained for a two year period, and in November 2010 the elected board was reseated.
The Northeast News learned that the TEA was holding a meeting last Friday which might have included a discussion of this situation, but no official comment has been made. Also, the North Forest board has called a meeting for Monday night, April 4 at 7 p.m. On the agenda are staff reductions, and the status of Dr. Johnson as superintendent.
The state of Texas assumed control of the district in 2008 due to its weak financial condition, irregularities in student attendance reporting and financial accounting, and poor standing academically on most of its campuses.
Johnson, who was an associate administrator at TEA at the time, and previously a superintendent at LaMarque ISD, has worked to improve these conditions. The district is now on better financial footing, and seven of the eight campuses are rated “acceptable” or better now by the state. However, the drop-out and graduation rate at the high school has not improved, and in fact has caused the district to receive an “unacceptable” rating and the probation rating on its accreditation. Johnson has made a number of changes at the high school, and says that more time is required to realize the results of these. North Forest is the recipient of a federal/state grant of $5.26 million, over 3 years, to make these changes at the high school, including a new principal, new staff, and better procedural methods. Johnson and Forté worked together on this Title I improvement grant.
In addition to raising the ratings of most of the campuses, Johnson has instituted many other innovative changes in the district, including bringing a YES Prep charter school into one of the unused buildings, giving serious academic students another choice and theoretically attracting out-of-district students. He has also been instrumental in setting up an Education Foundation, independent of the School District, that would raise funds for student, teacher, staff, and campus enhancements that would otherwise not be available. The Education Foundation was set to start a major fund drive this month, but now has been put “on halt” according to officials.

In memory of Alma Meza 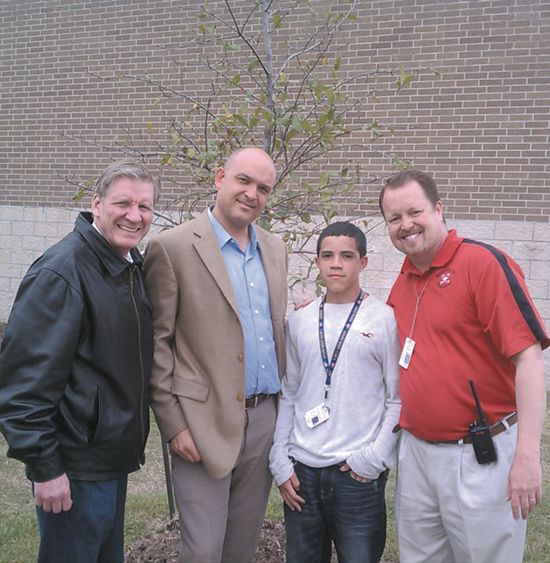 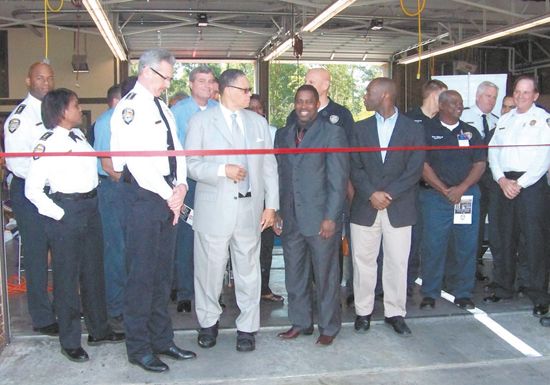 In his remarks, Chief Garrison noted that Station No. 56 was a very active station in the community, falling in the top 1/3 in the city for calls for service.
The original station was built in 1972 on East Little York Road, and closed last year for asbestos abatement. However, using portable buildings, the firemen maintained service from this location during renovation work.
The interior of the building was completely rebuilt, and new paving and mechanical equipment was added outside the building.
During the reopening ceremony, entertainment was provided by Cheerleaders and Steppers from Fonwood Elementary School.