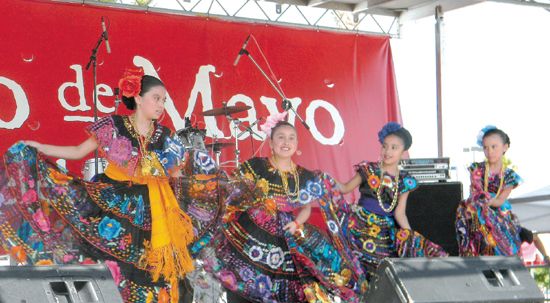 Last weekend was the celebration of 5 de Mayo and Mother’s Day at Northline Commons.
Special guest speakers Annise Parker, Houston Mayor and Congressman Gene Green welcomed the community. Chairman of Northline Commons, Jeff J. Procell was assisting host members.
The celebration started right after 11:30 a.m. and ended around 5 p.m. in which there was entertainment for the entire family with presentations of Band ‘La Traizion’, and band ‘Grupo Enzable’; radio Disney who executed some hip-hop movements and invited kids and mothers to dance with them on stage and gave prizes to those who participated in the dancing and games.
The celebration of 5 de Mayo could not be absolute without the presentation of a ballet folklorico, a group of professional performers dancing traditional Mexican music and wearing the distinctive clothing, and the Mariachi; these last two presentations are typical in celebrating 5 de Mayo.
Some local organizations such as Houston International Chamber of Commerce, Houston Community College and Northeast Campus were providing information as well as offering their services and products to the community.
The event was well attended, people were dancing and kids were playing at the moonwalks; it ended around 5 p.m. with the presentation of the band ‘Tam y Tex’.

Sometimes Retirement can be tougher than work 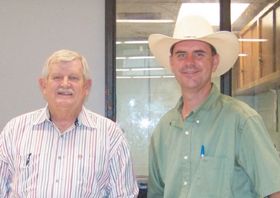 By GILBERT HOFFMAN Northeast News
This is a story about two Agriculture teachers at North Forest High School, and the strange events one of them had after his retirement.
Last summer, after the school year ended, the AG teacher at North Forest (Smiley) high school, Bill Dodd, retired after 38 years. Normally, a person can expect a quiet, simple life after retirement. But Dodd’s life was just about to get more exciting, instead.
In the month following his retirement, he suffered injuries from a fall at a swimming pool. Dodd broke three ribs and dislocated his rotator cup in his shoulder. As in most rib injuries, the doctors just taped him up and sent him home.
Not a great way to start a retirement, he thought. But things were about to get worse.

In December, as he was checking his property, a 67 acre ranch near Leona in central Texas, he was accidentally shot by two hunters in an adjoining property. The bullet entered his back, travelling from left to right, and lodging in his right hip. Although bleeding, Dodd managed to drive himself to the neighboring land, where he got the two hunters to help call for help and get an ambulance to take him to a hospital in Madisonville. There they decided to transport him to a trauma unit in Bryan, and Dodd got his first helicopter ride in a medical chopper. The surgeons at that hospital decided that due to the closeness to the spinal cord, they would leave the bullet in Dodd, and sent him home. Today, he still has the bullet inside his hip, and a bill for the ride of over $40,000.
After the Christmas holidays, which were certainly memorial, he experienced one more trauma. On New Year’s day, he developed a severe case of vertigo, or dizziness when he stood, and this lasted for about the next month. Doctor’s were unable to determine the cause, and his treatment consisted of rest and some motion-sickness medication. After about a month, the problem disappeared, but once more Dodd wondered at his eventful “retirement.”
He was in good health, and good spirits last month, as he participated with his old AG department, as North Forest put on their 49th Annual Livestock Show & Sale. The District honored Dodd at the event with a Certificate of Appreciation for his 38 years of teaching at North Forest, presented by the acting superintendent Edna Forté, AG teacher Larry Florence, Ms. Sheppard CTE head, and Ms. Sandler assistant principal at NFHS.
New AG Advisor
The Agriculture Science program at North Forest has a new Advisor this year, continuing a tradition that stretches back to 1953, with the first AG teacher Travis Batson, and has continued through 18 other advisors.
Larry Matthew Florence is teaching for the first year. Previously he was in law enforcement, as an officer with the Texas Department of Public Safety, and the League City police department.
After his retirement from police work, he decided to enter the teaching profession. When he answered an opening at North Forest for a biology teacher, he learned that the AG department also had an opening, and since he was raised on a farm and quite familiar with that environment, he decided to take that position instead. 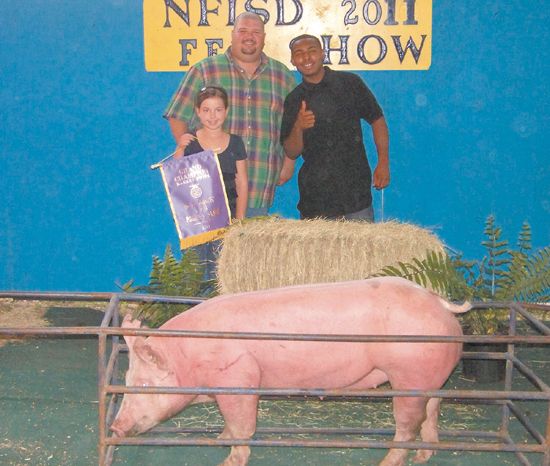 North Forest High School held their 49th Annual FFA Livestock Show & Sale, last Thursday night, April 21.
Students showed 24 projects, and raised about $17,700 in direct purchases, and another $4000 in add-ons to the bids. The total of about $22,000 was less than last year when the department showed 30 projects and raised about $43,500. However, the district and the AG department are in a rebuilding mode, and this was considered a reasonable show. Next year will be the 50th Anniversary of the FFA show, which started in 1963 with AG teacher Travis Batson and the help of the Rotary Club.
This year’s show was under the direction of the new AG Advisor, Larry Matthew Florence. There are 19 members of the FFA this year.
Before the sale started, awards were presented to students Jonathan Wagner, Edmound Petties, and Cristina Hernandez for showmanship, and to the retired AG teacher, Bill Dodd, for 38 years of service at North Forest district. These presentations were made by the acting superintendent, Edna Forté assisted by Larry Florence and Bill Dodd.
The auctioneer this year was Justin Beckendorff, the son of Glenn Beckendorff, who has been the auctioneer for 26 of the past 28 years of FFA shows at North Forest.
The number of projects or exhibited animals was down this year, a reflection of the economy and the district’s reorganization efforts, including hiring a new AG Science Teacher.
The auction took place at the AG barn, on the campus of the original Smiley High School on Mesa Drive. Judging the swine and poultry this year was Shane Weldon.
Bidders this year included Fort Bend Mechanical, Beasley Tire, Capital Bank, Bill & Margaret Ginder, Elvin & Ann Franklin, Larry & Lacey Prince, John McNeil, Bill Dodd, Bryan Simmons of Entec, Penny Pinchers, and McCauley Lumber.
Add-ons, a monetary contribution in addition to the auction bids, were made by Capital Bank, CTE, Penny Pinchers, NF Edna Forté, Beasley Tire, Nakisha Myles, Caldwell Companies, and others.

New 20-Screen Theater to open at Greenspoint Mall May 13 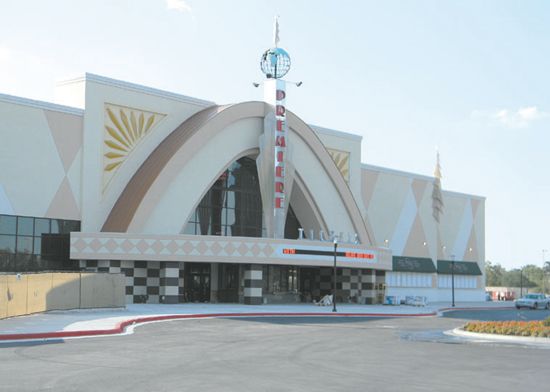 The North Houston Economic Development Council (NHEDC) announced the May 13 opening of the much anticipated all-digital 20 screen theater by Premiere Cinema located at Greenspoint Mall in north Houston.
Greenspoint Mall, located at I-45 and Beltway 8, near Bush Intercontinental Airport, owned by Academy Award winning film producer Bob Yari, will be the new home for one of the most technologically advanced theaters in the country.

“The new Premiere Cinema will create a synergy for the mall and provide a state-of-the-art movie theater in north Houston that will enhance the customer’s film experience” commented Greenspoint Mall owner, BobYari.
The Premiere Cinema chain based out of Big Spring, Texas, and owned by Gary Moore, operates over twenty theaters throughout Texas and the South. The Greenspoint Mall theater is one of only three theaters in the United States designed with all-digital technology.
All three theaters are owned and operated by Premiere Cinema. “I am excited that Gary Moore and Premiere Cinema is bringing this technology to north Houston,” said Reggie Gray, president of the North Houston Economic Development Council. “The theater will add another asset to the area that continues to draw attention for development both on a national and international level.”